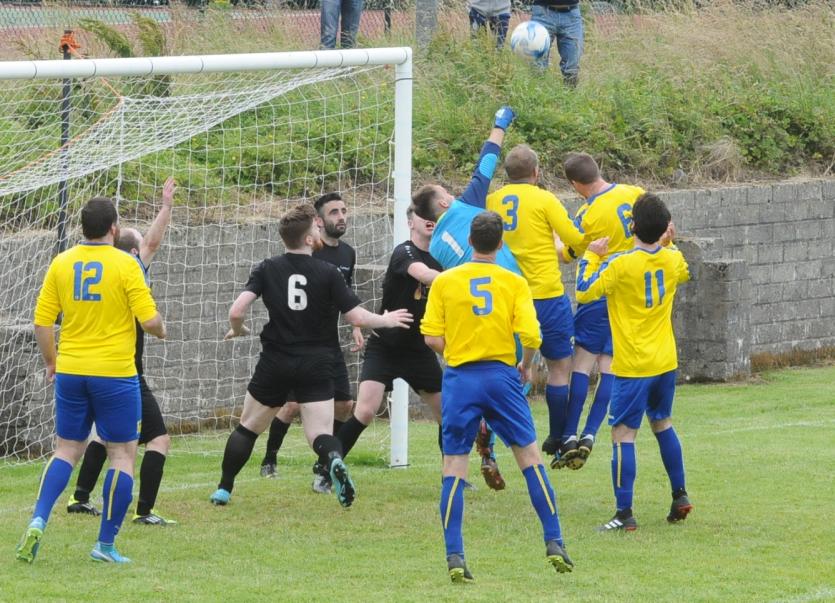 Action from the recent clash of Manor Rangers and Carbury in Bee Park Picture: Willie Donnellan

Manor Rangers' slim hopes of winning the Sligo Southern Hotel Super League were given an unexpected boost on Wednesday evening when league leaders Carbury crashed to a heavy defeat while the Leitrim kingpins resumed their winning ways.

Going into Wednesday's matches, Manor must have thought their chances were dead and buried as Carbury had picked up nine points without kicking a ball while Thomas McDonald's team had suffered two disastrous defeats in the previous week. It all looked as if Carbury were strolling their way to the title.

However, Carbury were without Ryan McManus and Mark McGoldrick who were both handed four match suspensions after Carbury's Glasshouse Hotel Cup Semi-Final defeat and Merville quickly set about dismantling the league leaders as Ryan Hargadon on four mintues and Daniel Kilcullen on 15 minutes each found the net against a shell shocked Carbury.

There was no respite for Carbury as Jordan Muldoon added a third before halftime as Merville cruised to a 3-0 victory, a victory that saw Carbury's lead at the top of the table cut to just two points after Manor Rangers scored an important 4-2 victory over Strand Celtic in Bee Park.

In a very open game, Manor took the lead from a corner in the very first minute from a brilliant Seamus Ryder header. Strand equalised with a superb strike from Luke McGuinn who nearly had a second only to see his effort superbly saved by Paul Scanlon.

Manor went in front before half time with another goal from a corner with a close-range header from Oran Gethins making his first appearance for the Senior side. The second half was end to end. Strand went close through McGuinn again and Scanlon made yet another fine save. At the other end Donagh Flynn cleared a goal bound shot off the line.

Manor went three up when Oran Gethin's completed his hat trick to mark a brilliant debut for the young strike. Niall McDermott hit the bar for Strand. With ten to go and Strand pulled one back with a late penalty taken by Strand keeper Cian Basquille this was a very exciting encounter on the superb pitch at the Bee Park. 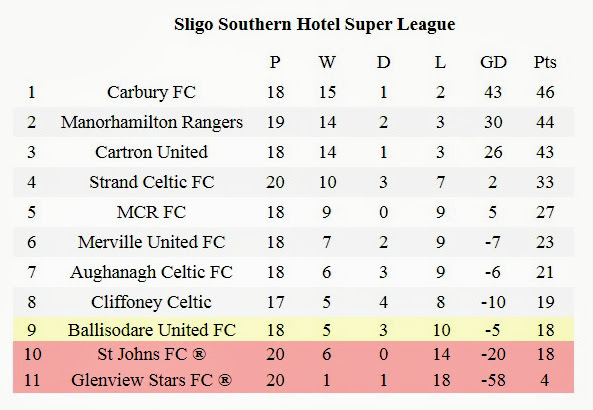 Manor Rangers play their final league game on Sunday away to Merville a win here would see them back on top. Carbury, in Cup action on Sunday, have games against Cliffoney Celtic and Ballisodare Utd to come, two teams that finished just outside the relegation zone.

However, both Manor Rangers and Carbury will be looking over their shoulder at the hard charging Cartron United who lie just one point behind the Leitrim men in third place and three points behind Carbury. They have a game in hand against Manor but have less of a goal difference than the two teams ahead of them.

Cartron United continue their devastating form this time winning well but not without a hiccup after Cliffoney Celtic took the lead on 18 minutes before Donal Gallagher levelled for Cartron nine minutes from the break. The second half was all Cartron  as Ryan Lynch, Donal Gallagher and Malachy Spratt all found the net.

Catron face Aughanagh Celtic on Sunday and then Ballisodare Utd next Wednesday in their remaining League games with the Glasshouse Hotel Cup Final against Manor Rangers to come on Saturday August 22.