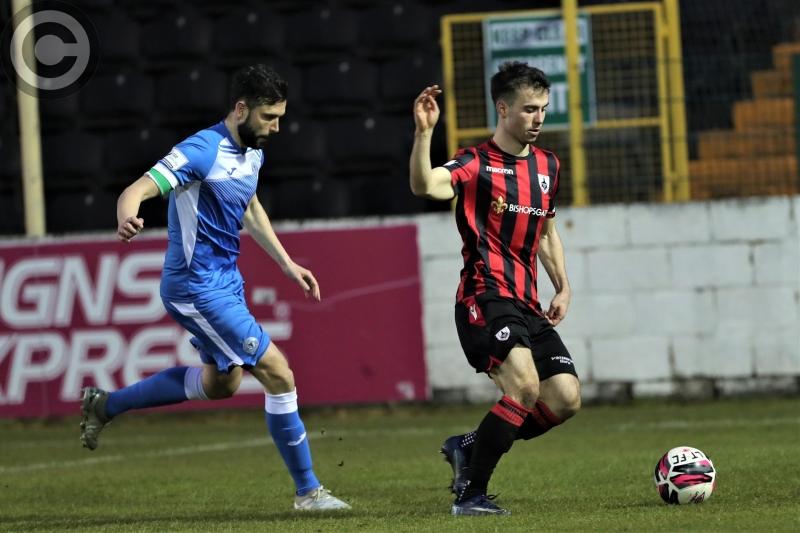 Karl Chambers pictured in action for Longford Town against Finn Harps in the Premier Division game at Bishopsgate on Tuesday Photo: Syl Healy

Longford Town picked up a vital point on Tuesday evening against Finn Harps the lack of a cutting edge in attack meant they created little to trouble the physically stronger Harps side who were rock solid in defence.

Having said that, the Town almost broke the deadlock in Bishopsgate with ten minutes gone on the clock when Sam Verdon shot inches wide of the post but it was the visitors who upped the tempo to dominate most of the remainder of the match.

Harps engineered three good chances in quick succession, the first from a Sean Boyd header that was narrowly off target in the 27th minute and moments later the same player had another goal attempt blocked down by Town defender Aaron O’Driscoll.

Almost immediately it took a fine save by Longford keeper Michael Kelly to stop a close range strike from the dangerous Harps striker Boyd and while the ball broke to Tony McNamee, he blasted his effort over the bar when a goal was there for the taking in the 30th minute.

That was a lucky escape for Longford, who went into the game without the injured quartet of Dean Zambra, Dean Byrne, Callum Warfield and Aaron McNally in what was a significant setback for manager Daire Doyle.

Harps continued to put the pressure on in the second half with a couple of decent chances falling to substitute Ryan Shanley who had a firmly struck effort deflected over the bar by Town defender Joe Gorman in the 83rd minute.

Moments earlier, Longford substitute Aaron Dobbs almost capitalised on a rare mistake by the hesitant Harps keeper Mark McGinley who was nearly caught out but the ball ended up going wide.

After losing the previous three league games against Shamrock Rovers, Drogheda and Sligo, the hard earned draw against Harps will be a boost for the Town who will be looking for another positive result in the crucial clash away to Waterford on Saturday evening.