Sligo Rovers battle to Dundalk win despite sendiing off 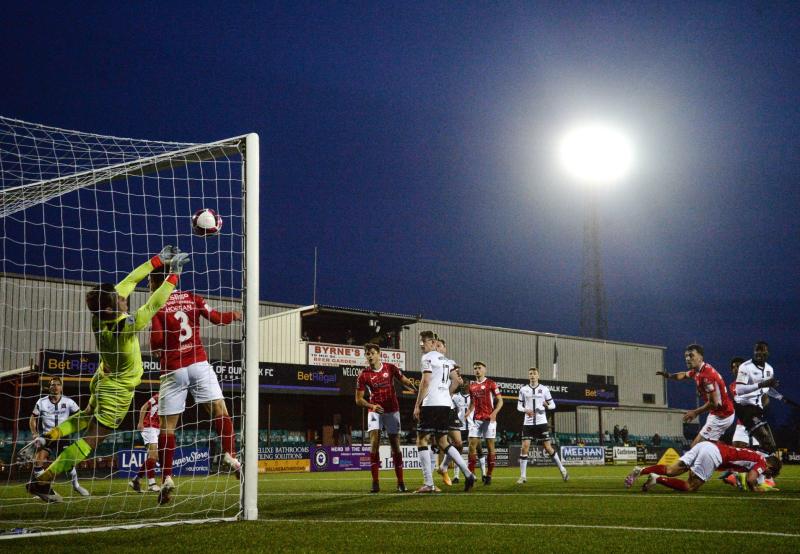 Sligo Rovers showed their battling qualities as they inflicted a 1-0 loss on Dundalk FC in Oriel Park on Friday night despite playing with ten men after the dismissal of Garry Buckley early in the second half.

The outstanding Jordan Gibson’s goal not long before the half-time break was all that separated the sides, as Dundalk struggled to create anything against the ten men of Sligo but the Bit O'Red had keeper Ed McGinty to thank for ensuring they went home with all three points with a fantastic injury time save that prevented a certain Dundalk equaliser.

Both teams made two changes from their respective Monday night draws with Longford Town and St Patrick’s Athletic, as Dundalk looked to make up ground on third-place Sligo.

For the hosts, goalkeeper Peter Cherrie retained his place despite making two mistakes in Longford, while Wilfried Zahibo and Han Jeong-Woo both came into the starting line-up. Sligo’s alterations allowed Lewis Banks and Johnny Kenny to both come into the side.

Unbeaten in four coming into this fixture, Dundalk had the game’s first chance early on when Junior Ogedi-Uzokwe had his close-range effort smothered by Sligo goalkeeper Ed McGinty.

At the other end, Greg Bolger drilled a shot harmlessly wide, before Walter Figueira crashed an effort off the underside of the crossbar in what was a real let-off for Jim Magilton’s side.

Sligo had by far the better chances throughout the opening half, but Han did well to retain possession for Dundalk before passing for Junior, who could only hit it straight at McGinty.

After showing some good skill out on the left, the Korean winger – after being set up by Sean Murray – had a shot well saved by McGinty, but it was all Sligo for the remainder of the half.

Having impressed in Monday’s draw in Longford, 18-year-old left-back Val Adedokun was dispossessed by Sligo’s own teenage prodigy, Kenny, who forced Cherrie into a good save.

Liam Buckley’s side took a deserved lead on 39 minutes when Gibson brilliantly turned Andy Boyle before rifling a shot from 25 yards beyond the grasp of the despairing Cherrie.

Dundalk were handed a lifeline early in the second half after Sligo were reduced to ten players when Garry Buckley picked up a second yellow card for a high foot on Junior.

The Lilywhites sought to break the Sligo resolve after that, with substitute Daniel Kelly firing over after being played in by Murray, who himself ballooned miles off target thereafter.

Wilfried Zahibo’s header was brilliantly saved by McGinty late on as Dundalk succumbed to their fourth league defeat of the season while Sligo Rovers closed the gap on leaders Shamrock Rovers and second placed St Patrick's Athletic.