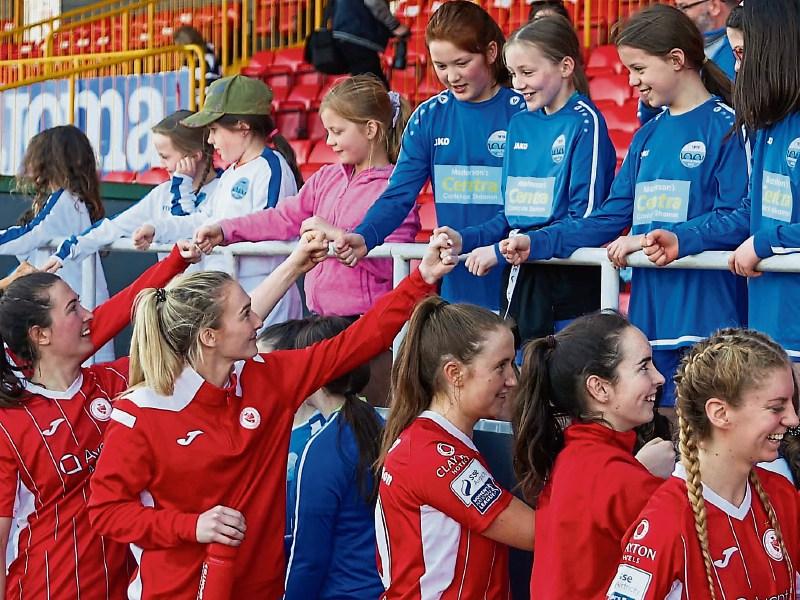 Members of the Sligo Rovers Ladies team shake hands with members of the Carrick Town Girls teams who acted as mascots and ball girls for the game. Unfortunately, Sligo lost out 3-1 to Bohemians with Emma Hansberry on target for the Bit O'Red who have one win from their five outings so far. They travel to Dublin take on Shelbourne next Saturday

With neither team challenging for honours, the home side proved the more clinical with two goals from Philip Patton and one each from Ciaran Clancy and Paddy Woulfe. Manorhamilton face Ballymote next Sunday in their penultimate league outing of the season.

Devaney in action for Athlone Town

Manorhamilton's Muireann Devaney was in action for Athlone Town in their 3-1 victory over Galway Women in the SSE Airtricity Women's National League on Saturday. All four goals came in a 23 minute spell with Athlone going two up before Galway pulled back one. However, the home team held on for their first win of the season.

An understrength Manor were only able to field one substitute but thanks to brilliant doubles from strikers Megan Rooney and Eimear Keaney, they were able to hold out against Carrick Town who had a goal apiece from Ellen Keaney and Sorcha Lowe.

Sligo Rovers host Shelbourne FC in the next round of the SSE Airtricity Premier Division on Friday, April 1, in the Showgrounds with a 7.45 pm throw in. A win could see Sligo take top spot in the League.