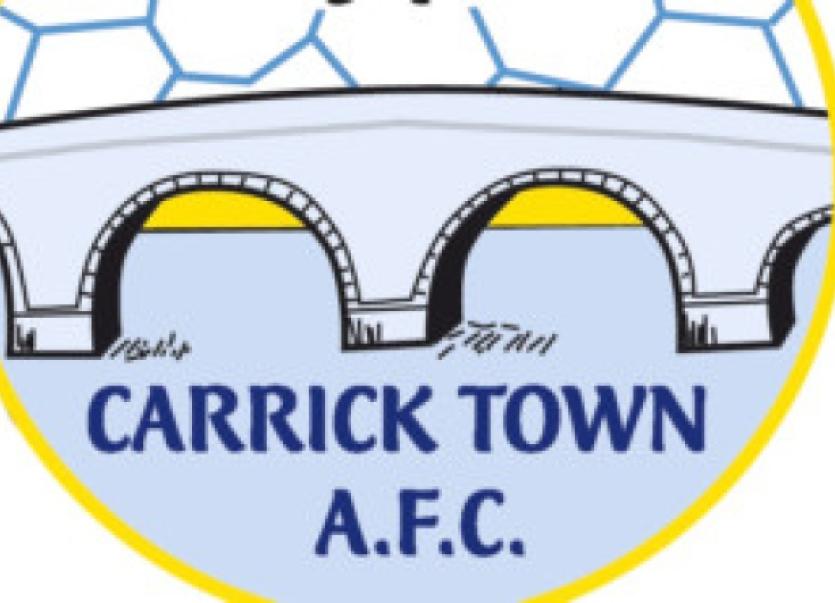 Carrick Town Senior team played City United on Sunday last in Sligo and were unlucky not to come away with a share of the spoils.

Carrick Town Senior team played City United on Sunday last in Sligo and were unlucky not to come away with a share of the spoils.

The game started with Carrick soaking up the pressure and causing problems on the break. After 25 minutes Jack De Lacy finished to net to give the town the lead however he was injured and had to be replaced.

Carrick held firm until 35 mins when City scored with a header from a corner to level the match. City took the lead after a good move to leave the half time score 2-1 to the home team.

The 2nd half started the same as the first with the town probing on the break. Finally with 20 mins left a superb ball across the pitch from Liam McTiernan found Steven ‘Giggsy’ Sirle in space and he finished smartly to draw the sides level.

The match was in the balance with both teams trying to create an opening and after a Carrick mistake City got the winner with just over 5 mins left. Carrick tried to get back level but could not and it finished 3-2 to City.

Carrick fought hard but never really got going while a few decisions didn’t go our way but if the same effort is put in for the rest of the season points will be picked up in the remaining games.

U-13: Our game v Arrow Harps was called off at the weekend.

Table Quiz: We are holding a fundraising General Knowledge Table Quiz in Gings Bar on Friday, February 21, at 8.30. €40 per table of 4. Raffle on the night. Your support will be appreciated.

Anyone interested in any of the following Leitrim Sports Partnership courses can e-mail us at sports@leitrimcoco.ie or call us at 071 9650498 to get more information and check course availability.

Wednesday February 12: Want To Move Mohill Walking Group at Mohill Family Resource Centre at 10.30: Walking is one of the easiest ways to be more physically active and plays a significant role in reducing heart disease and burn calories. All you need is a good pair of shoes, comfortable clothing and a viz vest. For more information please contact Tina McLoughlin on (071) 9631253.

Thursday, February 27: Code of Ethics Workshop in Leitrim County Council offices 7pm to 10 pm: Presented by the LSP, the Code of Ethics & Good Practice for Children’s Sport in Ireland is for the benefit of everyone involved in children’s sport. For more information please contact Declan Boyle on (071) 9650498.