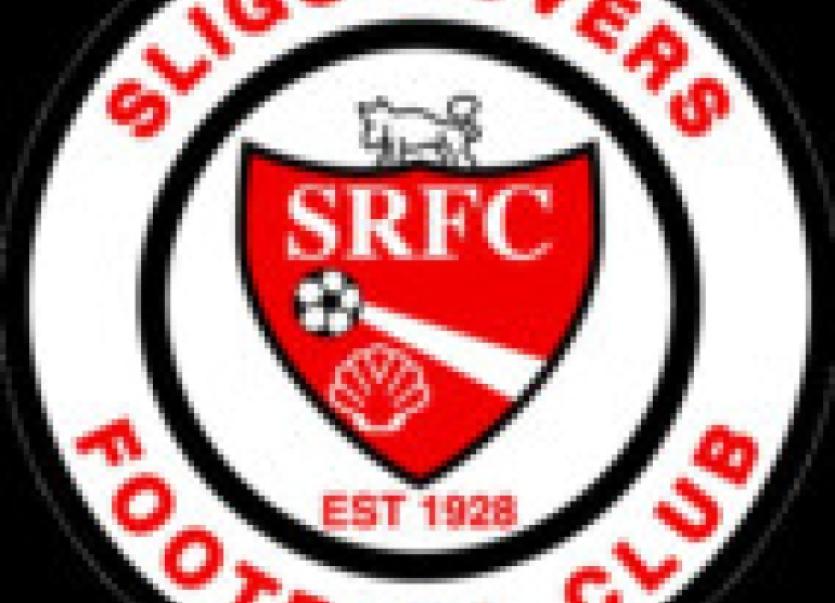 Sligo Rovers slipped five points behind Airtricity League leaders St Patrick’s Athletic in The Showgrounds last night when they were defeated 1-0 in a below par performance against Dundalk.

Sligo Rovers slipped five points behind Airtricity League leaders St Patrick’s Athletic in The Showgrounds last night when they were defeated 1-0 in a below par performance against Dundalk.

The home struggled all evening to create chances that would sufficiently test Dundalk goalkeeper Peter Cherrie and to make matters worse top goalscorer Anthony Elding was shown his second red card of the season when he foolishly kicked out at Richie Towell.

The only goal of the game arrived four minutes before the interval when Dean Massey’s ambitious volley from near the touchline was misjudged by Rogers and somehow found its way to top corner of the goal.

Bizarrely the home side failed to impose themselves on the game until the dismissal of Elding with 20 minutes remaining and shortly after the imposing forward was dismissed Aaron Greene was presented with Rovers’ best chance of the night. Having got between the Dundalk centre backs Greene looked to be through on goal but after delaying his shot he allowed Andy Boyle the opportunity to make an excellent tackle and he cleared the danger just six yards from his own goal.

In what was a very flat performance from the home side, the visitors were presented with an opportunity to double their lead with 12 minutes remaining after Gary Rogers fouled John Mountney, leaving Paul McLaughlin to award a penalty. However, Rogers made up for his mistimed tackle to make an excellent save to deny Patrick Hoban. The rebound fell to Patrick Hoban who shot from 30 yards but again Rogers was up to the task and made a fine save.

Dundalk were reduced to 10 men in the closing stages when Stephen O’Donnell was shown a second yellow but there was not to signal a route back into the game for Rovers and there could be no complaints as Dundalk deservedly inflicted a first home defeat of the season on the reigning champions.

Prior to last night’s game Sligo Rovers run of frustrating draws away from home continued on Friday night last as they were left frustrated by Limerick and in particular goalkeeper Barry Ryan in the wonderful Thomond Park stadium.

Anthony Elding, who has 10 league goals to his name already, came agonisingly close on a number of occasions to providing the decisive touch but he will know he should have found the Limerick goal just seven seconds into the second. Instead his shot proved to be relatively easy for Ryan.

Coming on the back of a 0-0 draw away to Bray Wanderers, Ian Baraclough would have been hoping his team would be able to rediscover the goalscoring touch that saw them look so dominant during the first two months of the campaign. However, it proved to be another evening of frustration for Baraclough’s men as numerous chances were squandered, although he will surely take heart from the number of chances that were created.

Gavin Peers and Elding both went close in the opening stages as Rovers looked inventive on the flanks and posed plenty of problems for the Limerick rearguard with Raffaele Cretaro, Aaraon Greene and Ross Gaynor all looking dangerous.

Despite their early pressure it was Limerick who were first to have the ball in the net as Axel Bossekota easily beat the offside trap in the 25th minute and sprinted clear of Gavin Peers before dispatching the ball past Gary Rogers. However, Bossekota was adjudged to handled the ball when getting past Peers and the goal was ruled out.

On a perfect evening for football the pace continued to quicken and Barry Ryan needed to be on his toes to deny Aaron Greene whose powerful hit shot from outside of the box may have posed more difficulties for the Limerick netminder if it had been closer to the corner of the goal.

As Limerick continued to settle into the game and their midfield players such as David O’Leary and Joe Gamble began to have more of an influence on proceedings it became clear the visitors would have to find their top form if they wished to return to the north west with all three points.

Before half time Gary Rogers was tested again but on this occasion he was able to O’Leary’s free over the bar.

After an exciting but goalless opening half Sligo Rovers would have been confident that they had enough quality within their ranks to find a winner and just seven seconds after the restart they came agonisingly close to breaking the deadlock. Joseph Ndo picked up the ball close to the centre circle and having surveyed his options he delivered an inch perfect ball into the path of Anthony Elding whose run had caught the Limerick defence off guard. Elding’s first chance was good but his finish was not up to the standard expected of a man who has terrorised defences all over the country since his debut in March. Rather than placing his shot into the corner of Ryan’s goal, Elding opted for power but his shot proved to be much too close to the goalkeeper who had the relatively straight forward task of deflecting the ball over the bar.

That would prove to be as close as either team would come to finding a breakthrough and as the evening progressed Limerick’s Danny Galbraith had more of an influence on proceedings as the hosts suggested they may in fact be capable of sneaking all three points.

Last night Rovers hosted Dundalk in The Showgrounds hoping to reduce the deficit or reclaim top spot from St Patrick’s Athletic who last night were also in action against UCD.

On Saturday next attention turns to the Ford FAI Cup as Sligo Rovers begin their campaign with a second round trip to face Waterford. Having appeared in three of the last four finals and won the competition twice in the last three years it is a trophy that it Ian Baraclough’s men will no doubt be going all out to reclaim.