Sligo Rovers singing in the rain 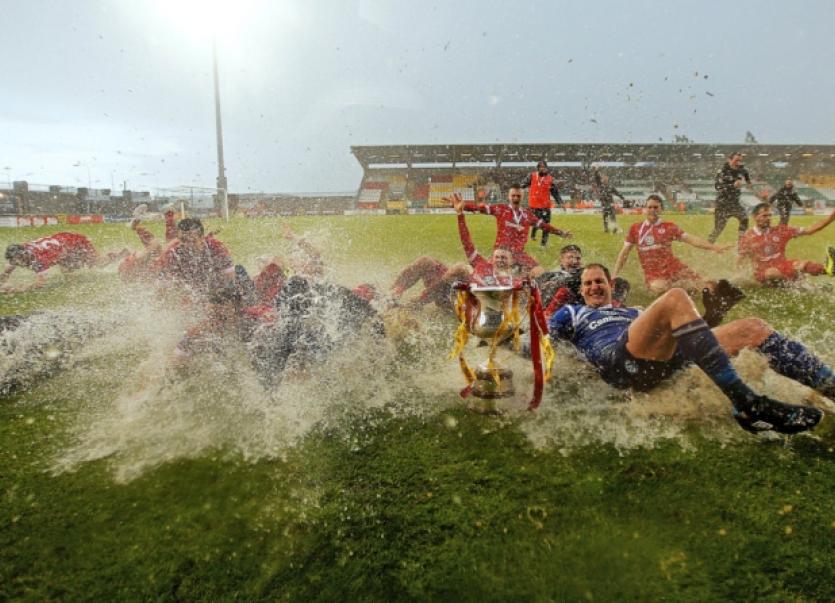 On a day when the rain threatened to bring the Setanta Cup Final to an early end, Sligo Rovers overcame both the weather and Dundalk.

On a day when the rain threatened to bring the Setanta Cup Final to an early end, Sligo Rovers overcame both the weather and Dundalk.

Last Saturday’s final proved to be an historic one for the Bit O’Red as they claimed a piece of major silverware for the fifth successive year.

Despite the conditions both sides managed to produce an free-flowing contest, with the opening half particularly exciting.

Rovers started positively as they looked to impose themselves on the game against a side who have been arguably the form team in the Artricity League.

The decisive goal arrived just 13 minutes into the final when a quick free was played to Aaron Greene on the wing and his delivery found the perfectly timed run of Paul O’Conor who applied a deft flick to divert the ball past Peter Cherrie.

The early goal meant Rovers had something to protect and they dealt admirably with the best efforts Richie Towell, Daryl Horgan and Patrick Hoban could produce.

The conditions worsened dramatically in the second half to such an extent that had Dundalk equalised it is highly unlikely extra-time could have been played.

On the rare occasions the Jeff Henderson inspired defence was breached Gary Rogers was on top form and he produced an excellent save in the dying stages to deny David McMillan to ensure Sligo Rovers claimed the title for the first time.

After the dramatic Setanta Sports Cup Final Sligo Rovers return to league action this weekend when they host Bray Wanderers on Saturday.

After the first round of games came to an end Sligo Rovers are in a healthier position than they were a month ago as a series of encouraging performances and results mean they have firmly put the memory of four consecutive league defeats behind them.

Although they are 10 points adrift of table toppers St Patrick’s Athletic, it is important to remember there is still two thirds of the season remaining and recent performances against the top teams in the country suggest Rovers will still have a big say with regard to the final destination of the league trophy at the end of the year.

Saturday’s opponents Bray Wanderers currently lie one place above Sligo Rovers although the Bit O’Red have a game in hand. In his first year in charge at the Carlisle Grounds Alan Mathews has made Bray a formidable force as they have already taken maximum points from both Sligo Rovers and Dundalk.

Joseph Ndo is an injury doubt having been forced off injured in the Setanta Cup Final while Alan Keane continues to recover from the knee injury that ruled him out of the final. Raffaele Cretaro and Gavin Peers continue their recovery from long term injuries. Cretaro is aiming to be back after the mid-season break in June with Peers aiming to return from a cruciate ligament injury in July or August.