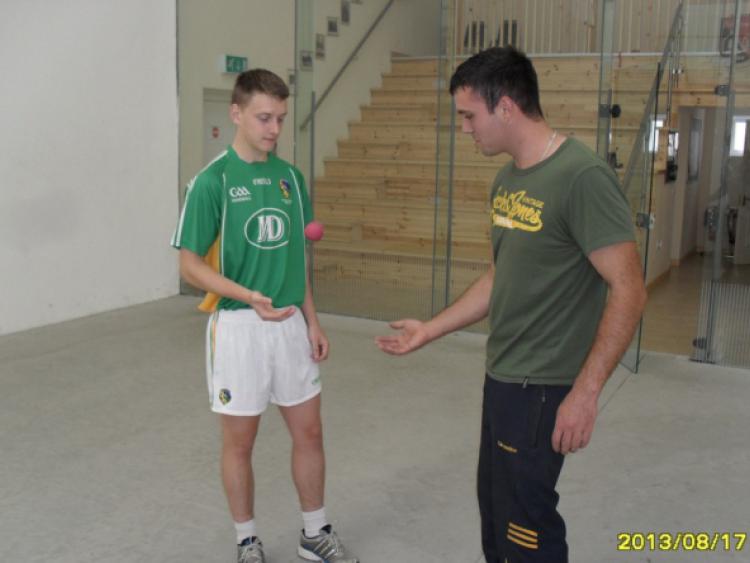 History will be made next Sunday when the newly renovated Fenagh Handball Alley hosts The M Donnelly 60x30 All-Ireland Minor Semi-Final.

History will be made next Sunday when the newly renovated Fenagh Handball Alley hosts The M Donnelly 60x30 All-Ireland Minor Semi-Final.

And to make the occasion all the more special, the semi-final will feature Fenagh’s own Shane Doonan and Wexford’s Galen Riordan.

This will be the first major championship match the state of art alley will host and an intriguing game is anticipated as Donal Wrynn is the link between these two opponents. Shane Doonan partnered Wrynn to win the 60x30 Doubles Minor title last year, while Galen Riordan was beaten by Wrynn in the 40x20 Minor Final earlier last year.

Riordan is not to be under estimated having reached the 40x20 Final again this year, while Doonan has only started back playing handball, having taken a break to concentrate on his studies this year.

Having said that Doonan has put in a lot of work over the last few weeks and while he struggled at times in the first game in the Connacht semi-final against Galway’s Alan Kilboy losing by two aces before going on to comprehensively beat him in the second game and then in the tie break.

The Connacht Final against Mayo’s Darragh Cunnane saw Doonan back in his stride by then and made sure of the title defeating Cunane 21-12,21-14 with some great serving and kill shots.

This is sure to be a tight and tense semi-final in front of a large home crowd with an All-Ireland Final place at stake, but Doonan is no stranger to pressure having played in an U16 semi-final and Minor 40x20 Doubles semi-final with Donal Wrynn before winning his Minor Doubles title. The Match starts at 3.00.

The curtain raiser to Sunday’s game is the Connacht 60x30 Juvenile first round between Leitrim and Sligo. Fenagh’s Alan Doonan (U-15) and Aaron Scollan (U-17) are in action for Leitrim and the games start at 12.00.

In another All-Ireland semi-final scheduled for Sunday, Drumshanbo’s Leo Logan takes on Kilkenny’s Brendan Burke in The M Donnelly 60x30 Junior B to be played in Inch’s Point Kilkenny.