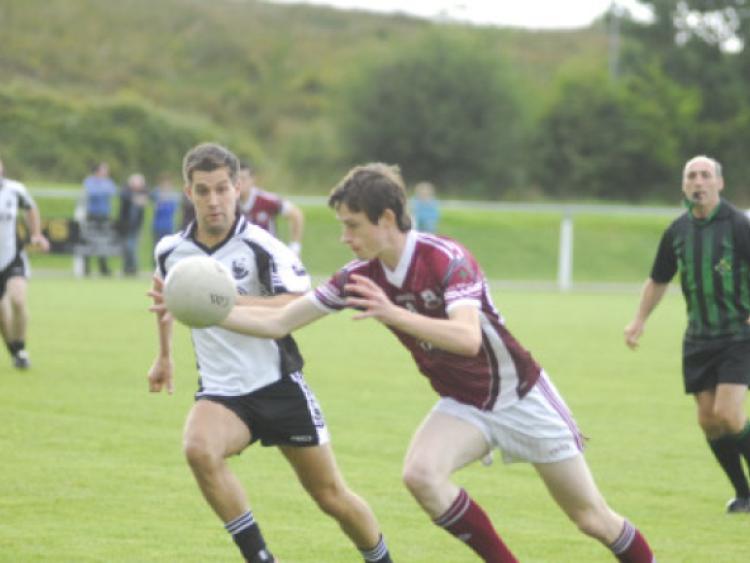 A draw was perhaps the fairest result when Glenfarne/Kilty and Drumkeerin slugged it out in a titanic battle last Saturday in Drumshanbo.

A draw was perhaps the fairest result when Glenfarne/Kilty and Drumkeerin slugged it out in a titanic battle last Saturday in Drumshanbo.

Glenfarne/Kilty took an early lead with Fergal Clancy tapping over a point from a free just 55 seconds after the throw-in but Jamie Langan had Drumkeerin level four minutes later when he shot over.

The Glenfarne/Kilty men had a let off when Langan hit the upright with a close-in goal chance. Over the next six minutes Drumkeerin continued to play some well controlled football when they moved the ball quickly up field into the Glenfarne/Kilty half and stretched their lead by three points.

Edward McTiernan and Langan hit the target from frees while Cathal McCawley added a point from play. Glenfarne/Kilty, who hadn’t scored for 14 minutes, replied with a 15th minute point.

Colm Clarke replied with a massive point from play five minutes later when he fired over from outside the Glenfarne/Kilty 45 metre line. But Daire Clancy kept Glenfarne in touch when he responded with a 24th minute point.

McTiernan finished off the half on a positive note when he converted his second free two minutes later to put Drumkeerin ahead by 0-6 to 0-3 at the interval.

Glenfarne/Kilty came out in a very determined mood and pulled level by the 36th minute with points from Diarmuid Clancy, sub Darren Murray and Fergal Clancy.

Neither side managed to register a score in the next six minutes but Colm Clarke broke the deadlock when raced through the centre of the defence from midfield and fired over Drumkeerin’s first second half point in the 42nd minute.

But a minute later James Murray got Glenfarne/Kilty back on level terms when he hit over a long distance point but Edward McTiernan put Drumkeerin back into a minimum margin lead with a point from play.

Fergal Clancy levelled the game for a fourth time when he hit the target from a free before James Murray edged the Glenfarne/Kilty men in front for the first time in 48 minutes when he split the Drumkeerin posts from play.

A minute later Glenfarne/Kilty had a 50th minute let off when James Gallagher blazed a goal chance wide and they had yet another close shave when Dermot Harkin did well to deflect a pile driver from John Cullen out for a ’45.’

Before the finish Glenfarne/Kilty got no less than three chances to claim victory. Conor O’Rourke hit a long range effort inches wide while top marksman Fergal Clancy failed to put a free on target and about 90 seconds later the same player’s accuracy again let him down when he shot wide from play.