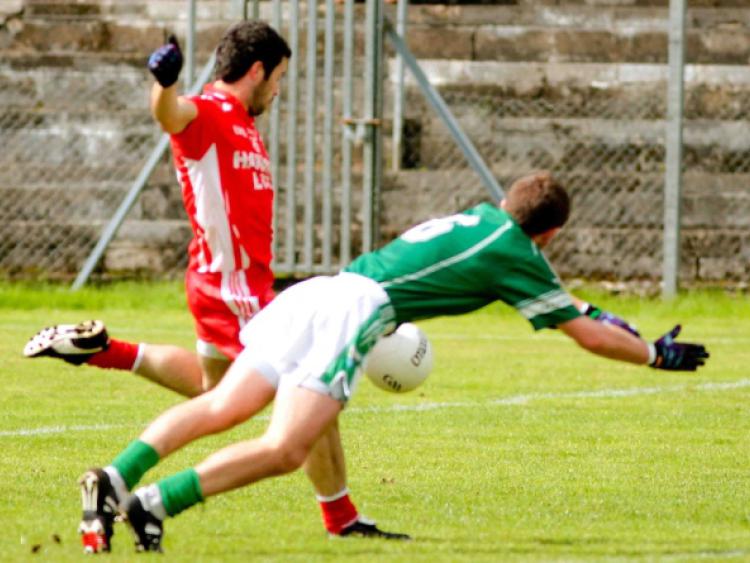 Dromahair’s aim of making up for the pain of defeat in last year’s Intermediate Championship final is still very much on track.

Dromahair’s aim of making up for the pain of defeat in last year’s Intermediate Championship final is still very much on track.

Dromahair proved too strong for Aughnasheelin in last Sunday’s quarter-final in Drumkeerin despite playing below par in the opening half.

As is sometimes the case it took a setback for Dromahair to up their performance. That setback arrived just 69 seconds into the second half when Brian Feeney was issued with a second yellow card. Ultimately the red card had no bearing on the result as Dromahair increased their intensity.

Over the course of the game Aughnasheelin found it difficult to pose serious problems for the Dromahair back line, which looked very strong. To make matters worse for Aughnasheelin, when they did create scoring opportunities they were too often let down by wayward shooting.

Although Cian Clinton opened the scoring with a fifth minute free, Aughnasheelin were asking plenty of questions and deservedly hit back.

Having appeared sluggish in the middle third of the pitch, Dromahair began to play with greater urgency and were on level terms with eight minutes of the half remaining following Conor Kelly and Cian Clinton frees and Dromahair regained the lead when Christy McGowan pointed.

Aughnasheelin hit back with another Egan free but it was Dromahair who finished the half strongly with points from Clinton (free) and Conor Kelly.

The dismissal of Brian Feeney early in the second half seemed to give Aughnasheelin the incentive they needed to get back into the game but Dromahair never allowed that to happen.

Conor Farrell and Declan Fowley were hugely influential as was half time substitute Gerard Kelly.

Two pointed frees from Cian Clinton were followed by further points throughout the half from Gerard Kelly and Conor Farrell.

With less than 10 minutes remaining and victory all but secured Clinton scored from play, to put six points between the sides.

Aughnasheelin’s Cathal Egan completed the scoring from a free but this was to be Dromahair’s day.