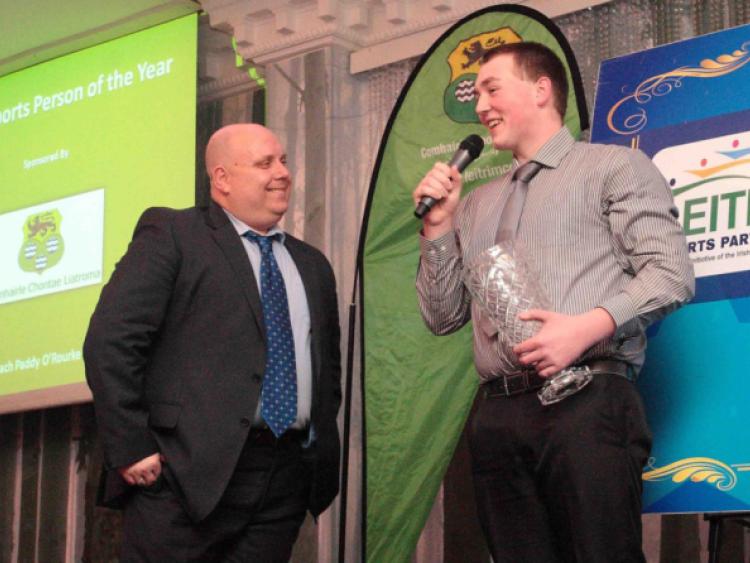 You mightn’t have guessed it from his reaction on stage but young Conor Hession was stunned at being named the Leitrim Sports Star of the Year for 2014.

You mightn’t have guessed it from his reaction on stage but young Conor Hession was stunned at being named the Leitrim Sports Star of the Year for 2014.

A delighted but clearly shocked Conor, when asked if he was expecting to win an award, said “No, I wasn’t to tell you the truth, I really wasn’t. It is a shock to my system when I heard my name, I was ‘is that me, is that me?’.”

His shock may have been obvious but the European Powerlifting champion from Carrigallen was more than able to spead the gospel of his growing sport - “It is just a brilliant sport to get into, it is just determination - you set your mind to lift that weight and you can lift anything you can when you set your mind to that.

“It is serious training, we train four times a week - we do squat and bench one day and we just lift dead-lifts to one day. We do squat and dead lifts and various and we just do 50% of our max, 60%, 70%, 80% and we do all that various things.

“You can’t move after it and people are saying you should not be able to move so that means you have done a great session.”

And it is not just physical according to Conor - “It is to get the head right in every single way, it is more or less technique you are using, you don’t use your back, it is just pure leg muscles. The only thing you are using for your upper body is just bench and that is triceps and your chest muscles and that is really it. As my trainers says, rip that thing up off the ground.”

A European title is rare on the ground in Leitrim but Conor is already aiming higher - “The World Championships are in Italy next year and I hope to first place in that, I’m aiming for that anyway and the Qualification for that is in February.”