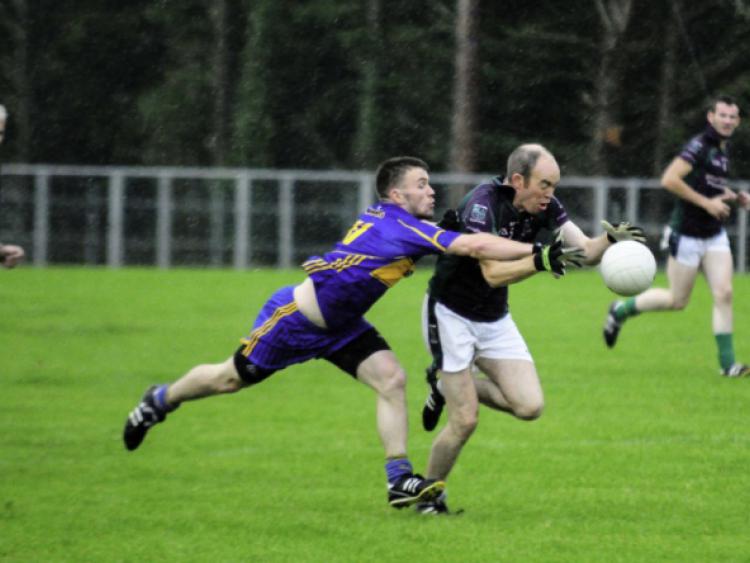 Cloone progressed to the quarter finals of the Glenfarne Wood Products Intermediate championship with a comprehensive victory over Leitrim Gaels on Saturday last at rain drenched Carrigallen .

Cloone progressed to the quarter finals of the Glenfarne Wood Products Intermediate championship with a comprehensive victory over Leitrim Gaels on Saturday last at rain drenched Carrigallen .

Cloone got off to a flying start within one minute with a Mark Creegan goal which bounced of the hands of the Leitrim Gaels goalkeeper Mark Chandler to the back of the net.

Donal Brennan was quick to add to the lead with a point but with Leitrim Gaels coming more into the game had wides from D Scollan and E Tracy .

Adrian Nicholls pointed following good work from Andy McGovern but Leitrim Gaels were lucky as a Gavin Reynolds shot went wide when a goal looked on.

Leitrim Gaels had another let off in the sixteen minutes as Damian O’Donnell was through on goal and brought a brilliant save from the goal-keeper Mark Chandler.

In the 19th minute, Conor Guckian pointed for Leitrim Gaels and following a clever pass from David Popplewell when a goal certainly looked on for the Gaels.

In the 24 minutes, Aaron McLoughlan pointed for Leitrim from a very tight angle as Damian O’Donnell was once again on the scoreboard with a point for Cloone, following good work from former county star Donal Brennan.

Cloone closed the half with two pointed frees from their marksman Damian O’Donnell which left the half time score 1-6 to 0-3 in favour of Cloone.

Leitrim Gaels started the second half with gusto but had wides from Aidan Flynn and David Regan. In the sixth minute, Damien O’Donnell increased Cloone’s lead with a point from play following good work from Donal Brenan, Mickey Lohan replaced Derek O’Donnell and minutes later

Adrian Nicholls goaled for Cloone but got injured in the process and was replaced by Ronan Mulvey.

At this stage, Cloone were coasting and Damian O’Donnell was scoring at will.

Cloone introduced Ciaran McGovern for Andy McGovern and Alan Canning for B Mulvey and and while Cloone held dominance Leitrim Gaels had their moments with points from Conor Guckian and David Regan.

In fairness Leitrim Gaels fought to the finish and had a number of Chances of scores but their finishing let them down. In the closing stages they finished their tally with a brilliant goal from Michael McManus but unfortunately it came too late to make a significant difference.

While Cloone ran out comfortable winners, no doubt they will face sterner tests ahead as they progress to the quarter finals.