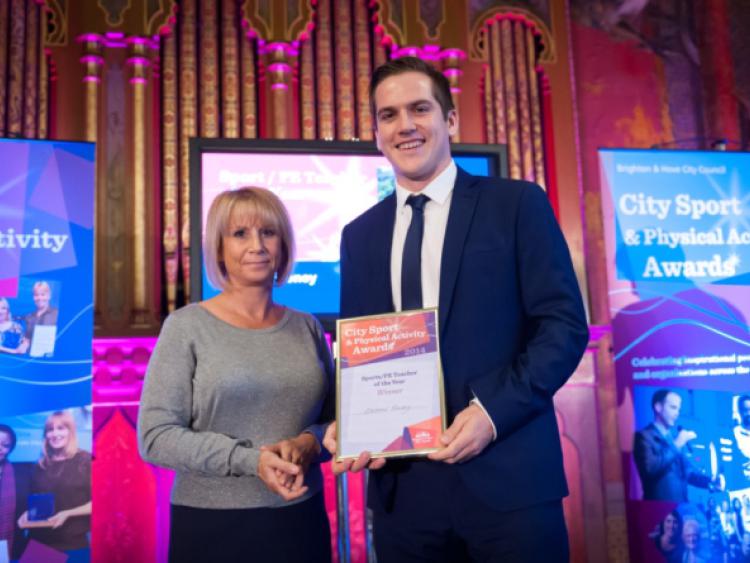 Former Leitrim U21 footballer Stephen Feeney has had his work as a PE Teacher in England recognised as he also spreads the GAA gospel.

Former Leitrim U21 footballer Stephen Feeney has had his work as a PE Teacher in England recognised as he also spreads the GAA gospel.

Stephen, who continues to travel home for games with his native Drumkeerin from his base in the south of England in Brighton, was recognised for his work in Goldstone Primary School when he was named the Sport/PE Teacher of the Year.

Now in his third year teaching in the school, Stephen was presented with his Award at the City Sport & Physical Activity Awards 2014 in the Royal Pavillion. The aim of the award is to recognise a teacher who demonstrates outstanding dedication to his/her profession and to sport and physical activity. They work tirelessly to engage with students across all abilities and physical activity interests, both in and out of curriculum time.

You might not imagine Brighton to be a hot bed of Gaelic games but Stephen is trying his best to impart the skills of the games to his students along with a range of other sports including badminton and Ultimate Frisbee.

The citation read “Stephen Feeney (Goldstone Primary School): Recognised for his amazing work to significantly increase the range of different sports and activities on offer to pupils at Goldstone Primary School. Stephen has introduced Badminton, Ultimate Frisbee, fitness and sports leadership into the curriculum. He has developed new after-school clubs for Gaelic Football and Rugby and has also established four orienteering courses accessed by all of the school.”