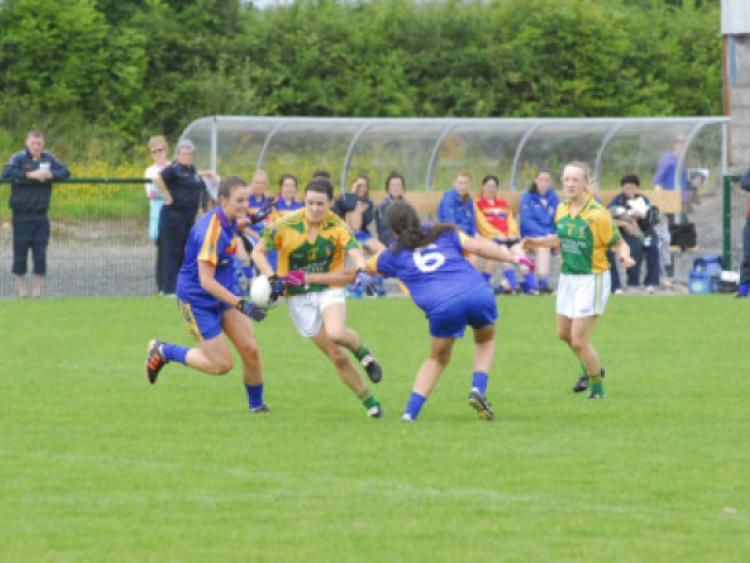 Leitrim’s hopes of success in the All-Ireland TG4 All-Ireland Intermediate championship came to an end on Saturday afternoon last.

Leitrim’s hopes of success in the All-Ireland TG4 All-Ireland Intermediate championship came to an end on Saturday afternoon last.

Injuries and absentees meant Leitrim were below full-strength and against a Roscommon team who had already defeated Leitrim in the Connacht Championship, this was always going to be a tough task.

While a seven point winning margin may suggest Roscommon had a relatively routine victory, it was only in the closing stages that the hosts secured victory.

Already without the likes of Aine Tighe and Sinead Fowley, Leitrim were dealt another blow when Roisin Fowley was ruled out through injury.

However, even against a very well organised defence Leitrim began brightly and looked confident in possession.

While Leitrim may have been without some players, the experienced trio of Mairead Stenson, Anna Conlan and Deirdre Ward led by example as they drove their side forward in the opening stages.

Roscommon opened the scoring when Natalie McHugh pointed in the fourth minute but that was soon cancelled out when Aine Heslin pointed after a good pass from Deirdre Ward.

The positive start made by Leitrim was rewarded when some clever, incisive play resulted in a penalty being awarded in the 10th minute.

Erin Farrell showed great patience as she surveyed her options before delivering a cross field ball to Anna Conlan. Showing good awareness Conlan released Kiera Keegan who was pulled back by Carol Manning as she was about to shoot having already sidestepped the goalkeeper.

Referee, Mel Kenny had no hesitation in awarding a penalty and a yellow card. Unfortunately Leitrim were unable to capitalise fully as Mairead Stenson’s penalty went over the bar.

What will have been more disappointing was that during the 10 minutes that Roscommon were down to 14 players, it was the hosts who played better and outscored Leitrim during that period.

Points from Natalie McHugh (free), Jenny Higgins and Aine O’Brien gave Roscommon a two point lead with a little over 10 minutes of the half remaining.

Leitrim regrouped well from that setback and finished the half strongly with two Michelle Heslin pointed frees followed by an Erin Farrell point on the stroke of half time to give Leitrim a slender 0-5 to 0-4 lead at the break.

With the game so delicately poised a good start to the second half was of real importance to both sides but it was Roscommon who struck decisively just 20 seconds after the restart.

Aine O’Brien was allowed to run too far without being challenged and by the time the Leitrim defence realised the imminent danger it was too late as O’Brien drilled a shot past Michelle Guckian and into the Leitrim goal.

With the Roscommon defence playing very well and the midfield pairing of Jenny Higgins and Tara Taylor having a big influence on proceedings the home side extended their lead with three points coming from Niamh Ward and two Natalie McHugh pointed frees.

During that period Leitrim’s only score came from Deirdre Ward as the lead grew to four points.

With 13 minutes of the contest remaining it appeared as though the game was over when Roscommon struck for their second goal. Niamh Ward and Natalie McHugh combined well to create a chance for Rachel Ryan who made no mistake.

To their credit there was no sign of the Leitrim players throwing in the towel and within a minute they were back in contention when they scored a fine goal.

Operating from deep, Erin Farrell played a clever ball to Roisin Curneen. The ball was then delivered to substitute Mary Poniard who, with her back to goal and several defenders around her did well to offload the ball to Anna Conlan who struck the ball sweetly to the Roscommon goal.

An Aine Heslin point moments later reduced the deficit further and now there was just a goal between the sides with 10 minutes remaining.

Leitrim tried desperately to reduce the deficit further but it was Roscommon who finished stronger.

Natalie McHugh was denied a goal only by an excellent Mary Farrell block while four points in quick succession from Mc Hugh (two), Martina Freyne and Laura Brudell secured victory for Roscommon who now advance to the quarter finals.