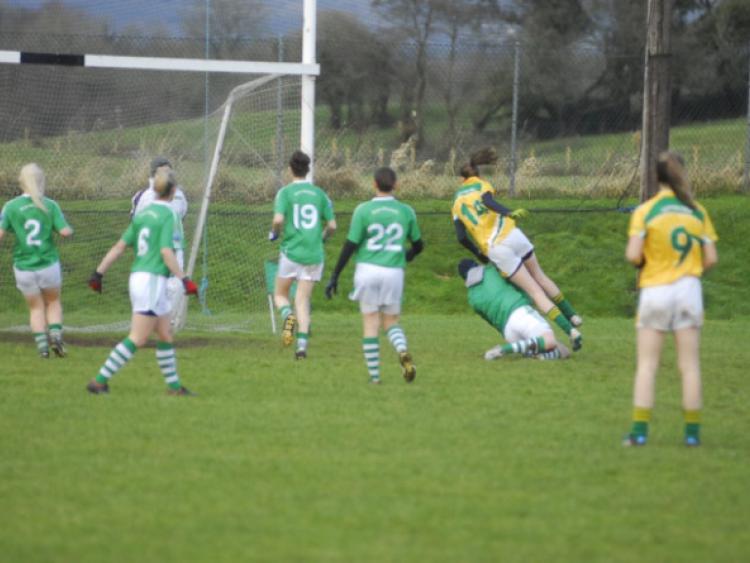 After that Leitrim upped their performance considerably in the second half and recorded their third successive win in the competition in which they remain so far undefeated.

It is a truism in football that goals win games and so in proved for Leitrim in Ballinamore when Áine Tighe got two for her side in the second half while subs Dearbhaile Beirne and Carla LaGuen added one each.

The impact of Claire Beirne, Dearbhaile Beirne and Carla LaGuen who all came on as halftime subs for Leitrim proved to be the turning point when the chips were down.

Leitrim made the brighter start and Áine Tighe put them ahead when she shot over from play within two minutes of the throw in. The home side enjoyed a double scores lead when Tighe tapped over a free nine minutes later.

After a slow start Fermanagh opened their account with a Caroline Little 15th minute point from play. But Leitrim edged two points in front again when Alibhe Clancy shot over two minutes later.

Fermanagh then took the lead for the first time in the game when Aisling Moane finished to the Leitrim net on the 20 minute mark. Leitrim regained the lead within the space of three more minutes when Áine Tighe converted a penalty after she had been taken down.

Tighe added a Leitrim point from play a minute later. However the game was in the melting pot after some poor defending by Leitrim when Joanne Doonan blasted home a 25th minute Fermanagh goal.

Before the break Alibhe Clancy shot over for the home side and Caroline Little got a free on target for the visitors to level the proceedings at halftime on a score line of Leitrim 1-5 Fermanagh 2-2.

The Erne County regained the lead within two minutes of the restart when Caroline Little converted another free. Following a good 35th minute move Leitrim hit back with an Áine Tighe goal, which put the home side ahead for the third time in this showdown.

Leitrim went further ahead two minutes later when Tighe shot over after receiving a final pass from sub Dearbhaile Beirne. Leitrim enjoyed their biggest lead in the game so far (six points) when Áine Tighe fired home her third goal in the 39th minute with Beirne again providing the final pass.

Fermanagh responded four minutes later with a point from play by Shauna Hamilton. However Leitrim went nine points ahead by the 45th minute when Dearbhaile Beirne blasted home a goal from close range past Fermanagh keeper Róisín Gleeson after Beirne had been put through by Áine Tighe.

Fermanagh rallied following this score when holding Leitrim scoreless for the next 11 minutes and hitting over four points without reply. Caroline Little added two Fermanagh points from play and one from a free while Lynne McFrederick also shot over.

During this spell Fermanagh keeper Róisín Gleeson was called upon to make a top drawer save which denied Leitrim’s Dearbhaile Beirne adding a second goal to her tally for the afternoon.

Beirne was also denied another goal chance later when her soccer style effort came back off the butt of Fermanagh upright and was cleared. In the final scoring action of the game sub Carla LaGuen ensured Leitrim’s win when hammering home a 56th minute goal which was answered with a similar score at the death by Fermanagh’s Sharon Little.