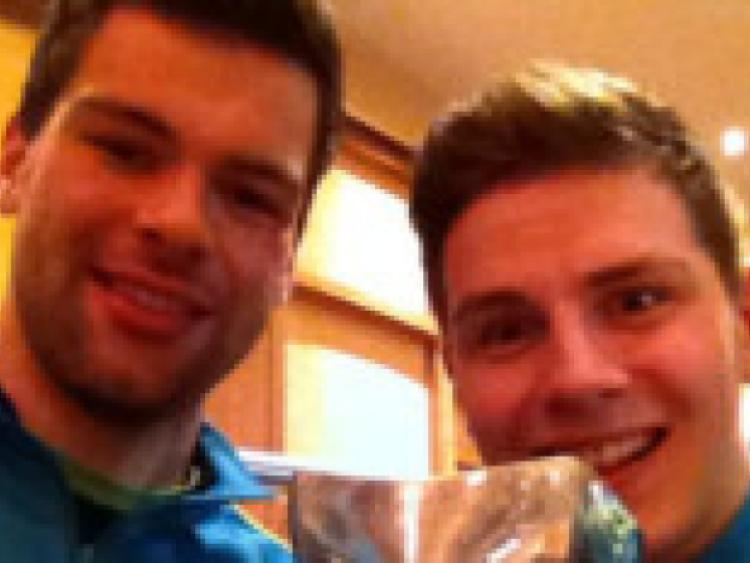 Two Sigerson Cup medals made their way to Leitrim on Saturday, with Donal Wrynn and Brendan Flynn part of the successful DCU side that claimed their fourth title, following a final win after extra-time over weekend hosts and 2014 champions UCC at the Mardyke in Cork.

Two Sigerson Cup medals made their way to Leitrim on Saturday, with Donal Wrynn and Brendan Flynn part of the successful DCU side that claimed their fourth title, following a final win after extra-time over weekend hosts and 2014 champions UCC at the Mardyke in Cork.

Wrynn bagged the only goal as DCU maintained their unbeaten record in Sigerson Cup finals, following a 1-14 to 2-10 win.

Niall Moyna’s side held their nerve in the second period of extra-time, as points from Roscommon’s Donal Smith and Wicklow’s Conor McGraynor secured a fourth title.

The sides were tied at 0-5 apiece at the end of the first half of normal time, with Wrynn’s goal handing DCU a 1-6 to 0-6 lead after 41 minutes.

However, UCC never gave up and spurred on by an Alan O’Donovan goal they took a late lead.

DCU dug deep with a Tadhg Lowe pointed 45 forcing extra-time, with the Dublin side the better in extra-time.

“It really ebbed and flowed, but we were just lucky to get the right scores at the right time to just keep us in the game,” Wrynn told the Leitrim Observer on the pitch after the game.

“We were lucky that we had the right men to step up and do it, and it’s an unbelievable feeling.”

It was a final which epitomised everything about the games that had just gone before it, with DCU having pulled through extra-time in Belfast against St. Mary’s - some heroics from Lowe and plenty of dramatic scores.

“This is a very special group. I think Niall (Moyna) has drilled it into us all year that we are a very difficult team to beat.

“There are incredible characters in the team, that have been able to keep us going. When the chips are down someone steps up - whether it’s our full-back; our midfield - there’s always one player that steps up.

“I think Niall has just been able to instill that mindset into us, that whenever there’s something needed that this team has it. It is just brilliant to play with these lads.”

St Mary’s Brendan Flynn was sub keeper for the campaign and Wrynn says it’s nice to have two Sigerson medals going to Leitrim - “It’s not too often you get in these positions when playing with Leitrim, but hopefully in the next few years we will change that and we will have more successes in the future.”

St Pat’s clubman Rory Kelly was a part of the IT Carlow squad that lost Friday’s semi-final to UCC by 2-12 to 0-8, although he didn’t feature in this game.

Meanwhile, there was disappointment for the other Leitrim man in action over the weekend. Eamon Curran was part of the GMIT Mayo squad that lost the third tier Corn na Mac Leinn semi-final to RCSI by 1-10 to 1-8.