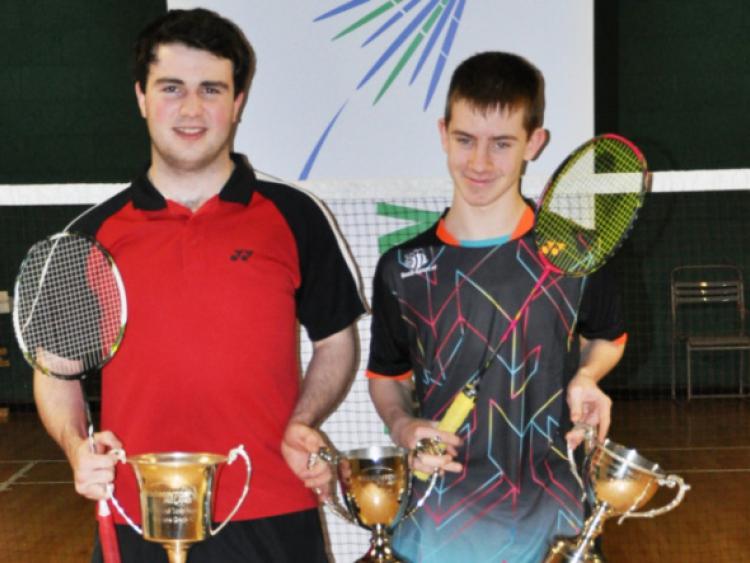 After taking a year out to concentrate on his studies Leitrim badminton player John Finnegan returned to the sport with a bang this season and made a little bit of history last Saturday at Galway tennis club.

After taking a year out to concentrate on his studies Leitrim badminton player John Finnegan returned to the sport with a bang this season and made a little bit of history last Saturday at Galway tennis club.

John teamed up with his doubles partner Jack O’Brien from Ballina after they secured a badminton triple-crown playing for their club Sligo BC.

On the day, the pair were part of the Sligo club team that lifted an All-Ireland club championship to add to their All-Ireland League title. Just a week before John and Jack had also won their first individual All-Ireland doubles title. In fact for John it was something of a grand slam.

Earlier in the season, playing with Jonathan Dolan from Sligo, he won the senior doubles at the International Student Badminton Tournament held in Limerick.

John, who was named as the Leitrim Sports Partnership Sports Person of the Year, began his playing career as a juvenile at Ballinamore Badminton Club.

Leitrim GAA County Board will hold an Insurance Information night for all clubs in the county this Thursday, February 26, at 8pm in Pairc Sean Mac Diarmada.

Ms Sinead Leavy, Insurance Manager Croke Park, will attend. Anyone who wishes to attend will be very welcome.

Eircom as sponsors of the All Ireland football championship has close association with the organisation and wishes to make it known that they are keen to give GAA players and members the opportunity to compete for upcoming jobs that are coming on stream in the company.

All news items for inclusion in the sports pages of the Leitrim Observer must be submitted no later than 12 noon on a Monday.