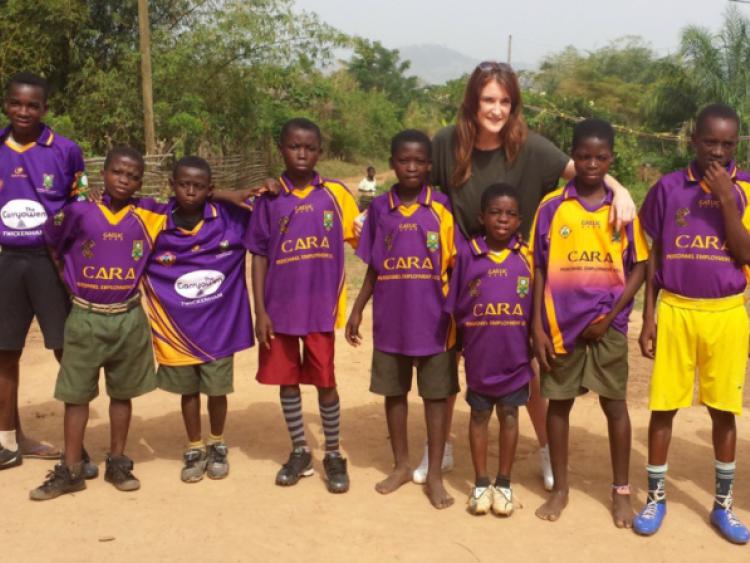 Leitrim people have spread their love of the GAA all over the world and Bornacoola’s Charlotte Faughnan did just that in Ghana recently where she travelled for the Cross Cultural Solutions programme, a charity which tries to improve the lives of others, especially children.

Leitrim people have spread their love of the GAA all over the world and Bornacoola’s Charlotte Faughnan did just that in Ghana recently where she travelled for the Cross Cultural Solutions programme, a charity which tries to improve the lives of others, especially children.

Charlotte, who plays with the Fr Murphy’s Club in London, volunteered for the charity and was sent to the mountainous Hohoe Municipality in the Volta region of the Ghana and over a four hour drive from Accra.

Happy Kids Foundation is an orphanage and school established in 1995 with only four students designed to provide affordable basic education to the residents of Wegbe (a suburb of Hohoe) and surrounding villages.

Since then, the school has grown to include a crèche and Kindergarten through 6th grade with 80 students, including 20 orphans. Younger students are taught rhymes, poems, simple arithmetic, alphabets, and basic English.

Charlotte was determined to pass on her Gaelic Football skills and to teach the youngsters all about St Patrick and about Ireland, she accomplished both targets admirably. The children were soon referring to the day as “La Feile Padraig”.

Charlotte took a set of Fr Murphy’s Ladies jersey’s, kindly sponsored by Julie O’Neill of Cara Personnel, and a football. On the afternoon of Saint Patrick’s day they had their own All Ghana Final. Fr. Murphy’s (Ghana Branch) v The Red & White.

Recounting the event, Charlotte said “I had told the kids about All Ireland Final Day in Croker and shown them some clips from previous years so they were all up for a debut in their own GAA Final.

“Two best friends from my Class 6, Robert and Solomon lined out against other with digs going in left right and centre long before the ball was thrown in. The match was as entertaining as it gets with a few of the boys showing some real potential and asking if they would get playing if they were in Ireland.

“I told them they might have to do a bit of training to get playing in Croke Park but they probably wouldn’t be far of some of the Junior A teams at home. After a few disagreements between umpires and players we concluded the fairest result was a draw and so the teams went to extra time.

“Eventually the tie was decided by a last minute penalty but the final whistle was greeted with great scenes of celebration for both the purple and gold and the red and white.

“It was amazing to watch the heart and determination as they adapted to a completely new sport but I suppose those are traits of the community that they were raised in - hearty, determined, hard working and jubilant at the end of it all. All in all it was a great few weeks and the joy of the children when they got a new set of jerseys and a football was unbelievable.”

Cross Cultural Solutions run volunteer projects in many parts of the world, Africa, India, Central America to name a few.

Fr Murphy’s Ladies are delighted to be associated with this project.

Charlotte has now returned to London and is already in training for the forthcoming season with Fr Murphy’s Ladies as they strive to regain the All Britain championship, which they won with style in 2013. This year on the team Charlotte will be joined by fellow Leitrim girls, Kirby Gilgunn, from Ballinamore and Lynda Thompson from Glencar/Manorhamilton.