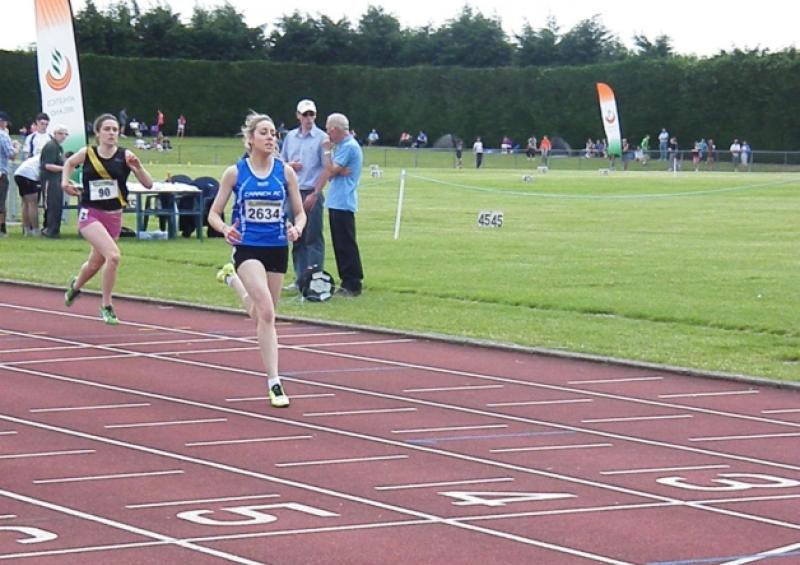 Joanna Duignan added to her growing reputation by winning the Woodies DIY AAI Under 18 400m Championship at Tullamore on Sunday last.

Joanna Duignan added to her growing reputation by winning the Woodies DIY AAI Under 18 400m Championship at Tullamore on Sunday last.

The Carrick-on-Shannon AC athlete clocked an impressive time of 57.90 to finish well ahead of Seanna Reilly of Clonliffe Harriers who clocked 58.82 and Rebecca Carr of Blackrock (Louth) A C who finished in 59.48.

Joanna’s victory completes a good week for the Annaduff native after she was picked for the Irish Schools team to compete in the 300m and 4 x 300m events at the Schools International in Morton Stadium, Santry on Saturday week, July 20.

There was a further medal for Leitrim in a sizzling Tullamore on Sunday when Laura O’Dowd of Ballinamore AC ran a very strong race to finish third in the Under 19 800m in 2.18.00.

The event was won by Aislinn Crossey of Newry AC who took over two seconds off the old record when winning in 2.07.7.

Both O’Dowd and second placed Rachel O’Shea of West Muskerry (2.15.6) chased hard but could not catch the impressive Crossey.

Cathal McElgunn was the only other competitor to come through his heats, finishing seventh in the U-19 400m Final on Sunday in a time of 52.80.

A number of other Leitrim athletes, who qualified in the Connacht Championships, competed over the weekend but did not get among the medals. These included:

More Leitrim athletes will be in action in Tullamore on Sunday July 21, when the Championships conclude.