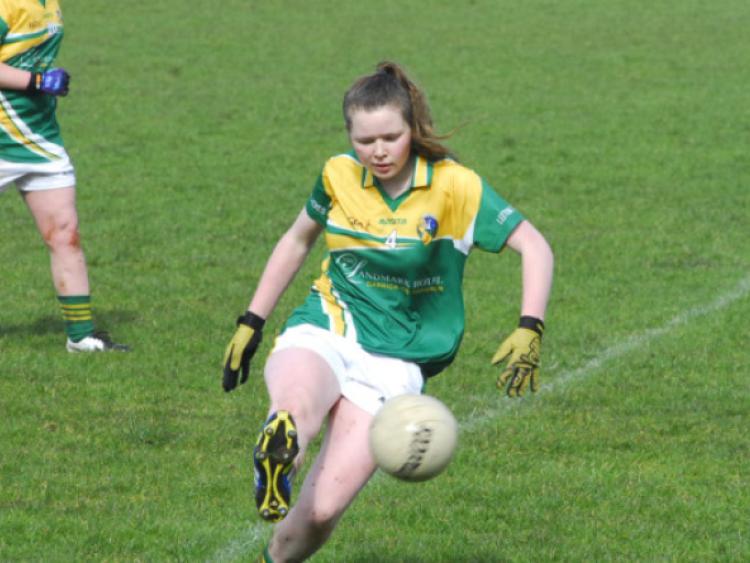 Leitrim booked their place in the Tesco Homegrown Ladies Division 4 semi-finals but only after surviving a stern test from an unheralded Wexford.

Leitrim booked their place in the Tesco Homegrown Ladies Division 4 semi-finals but only after surviving a stern test from an unheralded Wexford.

The Leinster women have won just one game out of six in this year’s campaign but belied that form as they put Leitrim to the pin of their collars to secure the victory they needed to reach the League semi-finals.

Aine Tighe again led the way with a personal tally of 2-6 but it was crucial interventions from Aine Heslin and Roisin McHugh in the second half got Leitrim across the line in a game that was much tougher than any Leitrim supporter expected.

Indeed, more than a few probably had nightmares as Wexford stormed into a four point lead in the first five minutes, recalling Sligo’s brilliant start two weeks ago. Crucially Leitrim responded with a Tighe penalty shortly after to give them a lifeline.

And in the second half, with Wexford facing the strong wind, Leitrim pushed up high on the visitors, forcing them into turnovers as they scored an impressive 1-10 against just 2-2 for Wexford.

As much as Leitrim know they are in the semi-finals, their last game against Division leaders Waterford could have huge implications with Sligo and Roscommon just three points behind in third and fourth.

The top four are finalised but their placings and who faces who in the League semi-finals have yet to be decided - a win for Leitrim over Waterford would leave Leitrim top of the table regardless of points difference by virtue of the head to head.

A loss could see Leitrim drop to third were Sligo to win but a three way tie in second would mean a draw taking place to decide placings so there is still a lot to play for.

Manager Pat Costello will take quite a few positives from Sunday’s encounter, none more than the return to form of Aine Tighe who still looks as if she is labouring with injury but she is still the key player, scoring 2-6 against Wexford, 1-2 from play as she set the tone for her team-mate.

Roisin McHugh was another to catch the eye, benefitting greatly from being pushed up the field while Aine Heslin also attacked very well from deep.

Carla Le Guen continues to impress as the brightest of a young crop of talent players and she was at the heart of Leitrim’s two goals while the older experienced heads of Anna Conlan, Sarah McLoughlin, Deirdre Ward and Lorraine Brennan made big contributions.

Wexford flew out of the starting blocks with four points in the first eight minutes as Leitrim replicated their Sligo start last Sunday, Maeve Quill with two points and Maria Byrne and Roisin Murphy adding one apiece.

Carla Le Guen was desperately unlucky to see a shot come off the post but at the other end, Michelle Guckian saved a Wexford shot but Leitrim made a huge breakthrough on ten minutes when Tighe played a one-two with Le Guen along the endline.

The Kiltubrid woman seemed certain to score but a diving Wexford defender scooped the ball away but referee Carmody indicated a foot-block, somewhat harshly although it did appear the defender had played the ball away while lying on the ground in the square.

Tighe dispatched the spot-kick to the net with Deirdre Ward driving the ball over the bar as a good passing movement opened up the Wexford defence, the ball going too high with Aine Tighe quickly adding a free.

However, Wexford belied their status with two Byrne points with Sarah McLoughlin scoring a good point on the run. Leitrim had a real let-off when Mairead Stenson misjudged a ball only for Byrne to scoop the ball wide with only Guckian to beat.

As the weather conditions deteriorated, Wexford hit four unanswered points in the final minutes with Clara Donnelly scoring from distance, Sharon Kehoe on the run, Maria Byrne after the Leitrim defence lost the ball before adding another before the break.

That left Leitrim trailing 0-10 to 1-3 but Leitrim got off to the best possible start with 1-4 in the first five minutes of the half - Aine Tighe converted a free before finding herself in the right place to put the rebound from a powerful Le Guen shot in the net.

Le Guen, Michelle Heslin and Anna Conlan all added point, Conlan could perhaps have found the net to leave Leitrim three clear but Waterford’s response was equally impressive, Maria Byrne pointing a free before she fisted a cross to the back to the Leitrim net.

That left Wexford one up but Aine Tighe responded immediately for Leitrim to tie the scores before she added two more, one from a free, while the impressive Roisin McHugh thumped a good shot over the bar to leave Leitrim three clear again.

The game then entered a period of stalemate but it was broken in spectacular fashion by Wexford when Maria Byrne gathered the ball in midfield, lost Mairead Stenson and ran in some 40 yards, going through a challenge before side-footing the ball to the Leitrim net.

That levelled the scores but Aine Heslin raided from defence to fire over a lead point. Wexford put on a lot of pressure to get an equaliser but Leitrim held firm and Aine Tighe made sure of the win with a free two minutes into added time.