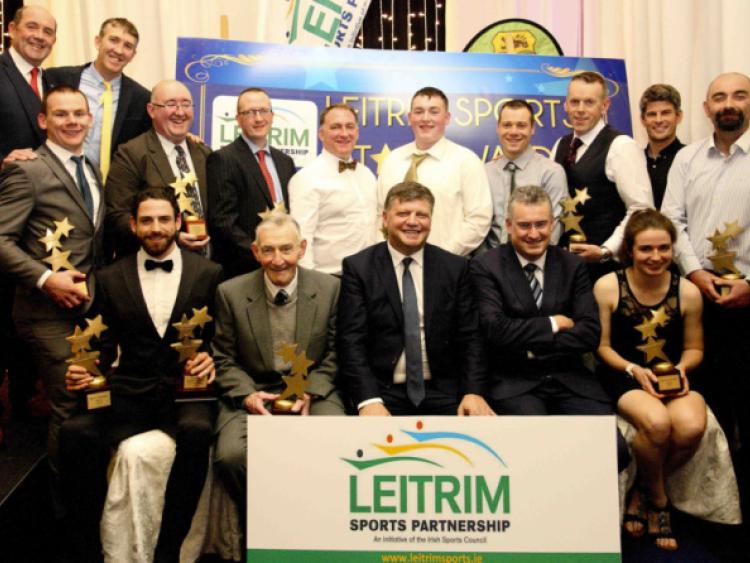 Leitrim may not feature on the winner’s podium too often in many team sports but last Saturday night’s fifth Leitrim Sports Star Awards illustrated just how competitive and successful sports people from the county have been over the past 12 months.

Leitrim may not feature on the winner’s podium too often in many team sports but last Saturday night’s fifth Leitrim Sports Star Awards illustrated just how competitive and successful sports people from the county have been over the past 12 months.

Gaelic footballers, hurlers, athletes, soccer players, swimmers, cyclists and power lifters were among the nominees across the various categories while Leitrim’s legendary gaelic footballer Packy McGarty was inducted into the hall of fame.

All nominees were invited to bring trophies, medals, jerseys and vests they collected over the past 12 months and when all were put on a table, it further illustrated just how much sporting talent there is within the county. Throughout the night there were inspirational stories from those who had overcome the odds on their way to success.

The standard in the various categories was typified by the Special Achievement Award which was awarded to David Downes who completed the Marathon Des Sables.

Upon receiving his award, David expressed his shock at being chosen, saying he expected the award would go to Breifne Earley, who emerged victorious in the Pedal the Planet race. David’s acknowledgment of Breifne’s achievement was greeted with warm applause.

However, when David got the chance to explain what competing in and completing the Marathon Des Sables consists of, many in the room were almost in a state of shock upon realising the full extent of what he had put himself through as he ran 250km in six days in the Sahara desert with temperatures often reaching over fifty degrees.

When asked if he would do such an event again he replied without hesitation “never”, giving an indication of just how difficult and demanding the event was.

What has been an incredible year for the Mohill gaelic footballers saw them claim the men’s team of the year award with Ciaran Kennedy remarking it was extra special given that Mohill native Packy McGarty was being inducted into the hall of fame.

The success of the Kiltubrid Ladies in winning a first ever Senior Championship and a national title at the All-Ireland 7’s was also recognised as they were named Ladies Team of the year while Aine Tighe was nominated in the senior sports star of the year category.

The Junior Sports Star of the year proved to be one of the most competitive categories with the judges unable to select just one winner and Dearbhaile Beirne and Conor Hession were both honoured.

Dearbhaile represented Ireland at the UEFA U-17 Championships and also played for the U-19 team during the year and helped Leitrim reclaim the Connacht Intermediate Championship while Conor won a powerlifting world title and he spoke of his long term aim to establish a powerlifting club in Leitrim.

The success of athletics within the county was also recognised with John Connolly honoured with a volunteer of the year award while Gerard O’Donnell completed a 2015 to remember as he was named the overall sports star of the year.

Accepting his award Gerard said “I didn’t expect this at all. My clubmate Eanna Madden had a huge year as well and deserves this as much as I do. This is an individual sport with a lot of support behind the scenes.”

When asked what advice he would give to young athletes, Gerard said “Patience. I had a 10 year wait from my first international vest to my second. I have dedicated my life to it for the past two years.” The key to success added Gerard, who represented Ireland in the European Indoor Athletics Championships, is “Being obsessed with it and giving it everything.”

The largest round of applause of the night was reserved for Packy McGarty who was inducted into the Hall of Fame and the standing ovation he received gave an indication of the esteem in which he is held.

Packy is widely regarded as Leitrim’s greatest ever gaelic footballer and accepting his award he paid tribute to those he played alongside when he represented Leitrim in four successive Connacht Finals.

“Only for the great players I had alongside me I wouldn’t have this award. The only disappointment is that we didn’t win anything. We were so near and yet so far but that’s the way it goes. If we’d won one, I’d be happy,” he said, adding, “There were some great players and this is for them.”

Packy’s award crowned a memorable year for all associated with GAA in Mohill with Packy joking “Look at what they won, we couldn’t win anything.”