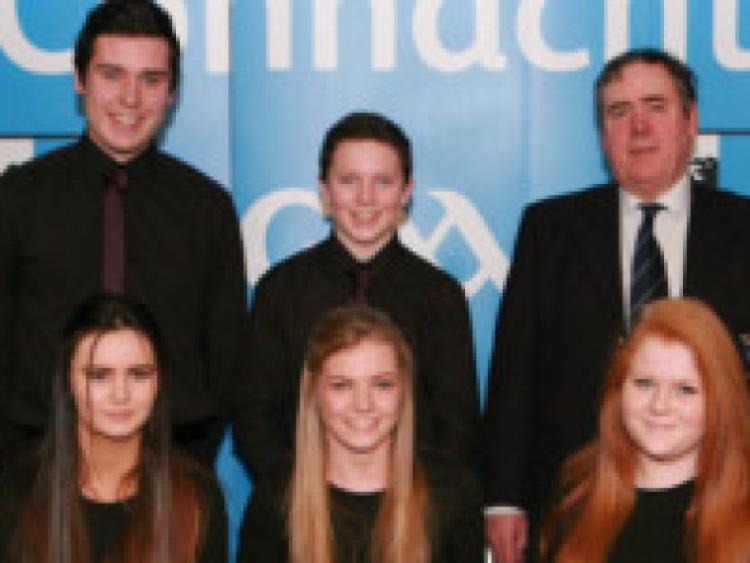 One Connacht title for Leitrim in this years Connacht Scór na nÓg Finals last Saturday in Claremorris with an impressive Leitrim Gaels taking home the only title in the Ballad Group.

One Connacht title for Leitrim in this years Connacht Scór na nÓg Finals last Saturday in Claremorris with an impressive Leitrim Gaels taking home the only title in the Ballad Group.

The first Leitrim performance to take to the stage was represented by the fine young ladies of St Mary’s in the Figure dance. The girls gave a fabulous performance but the eight ladies from St Dominics in Roscommon danced through to the All-Irelands once again.

Easkey won the only title of the evening for Sligo in Instrumental Music , winning over our Leitrim Gaels team who received great rapture from the audience but unfortunately not the judges choice and Easkey retained their title for a second year.

Recitation was a very entertaining competition and Patrick Mullooly of St Dominic’s Roscommon was declared the winner. Credit to Aughnasheelin’s Sarah McWeeney and the self penned tale of modern day Scor , it drew lots of positive attention and received commendation from outgoing chair Mick Rock of Roscommon in his closing speech.

Leitrim has no entries in either of these competitions much to the shock of other Connacht counties as we would be deemed strong on both of these. One to revive for next year and not let the talent pass us by unnoticed.

Leitrim’s standard of participation was as high as ever this year and no doubt Leitrim Juniors will be back with a bang again in 2015.

The All-Ireland Finals will be held in Citywest Hotel & Conference Centre on February 14, at 3pm. Please note it is a ticket only event, tickets are priced at €20 and are non-refundable. they can be ordered through your club officer or Maura Mulvey at 087-6486967, all orders must be placed by Monday January 27.

Wishing Leitrim Gaels and all of the Connacht winners the best of luck.

Scor na mBunscoileanna: Schools Scór is underway this week with the first night on Thursday January 22, in the Mayflower Drumshanbo. The second night of this event has been postponed to Thursday January 29, in the clubrooms at Leitrim Gaels Pitch. Both nights will start at 6pm sharp.

Wishing all of the Scór na mBunscoileanna the very best of luck.