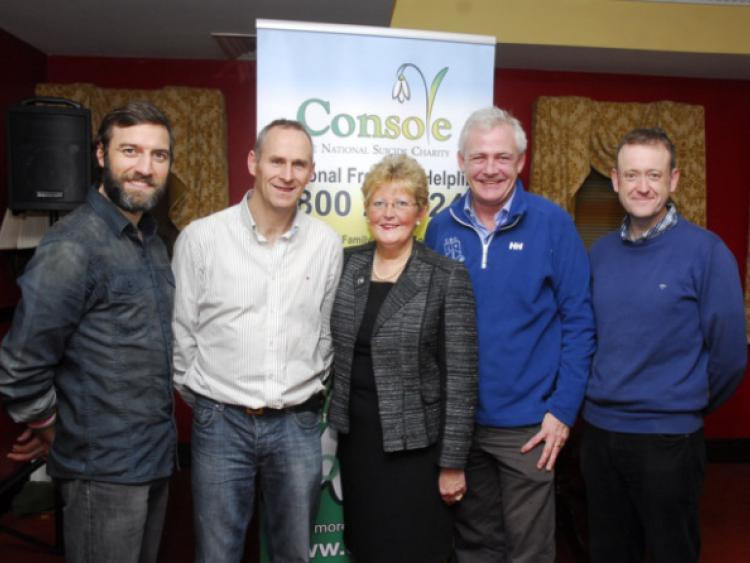 Fionnbar Walsh provided a fascinating insight into the life of his inspirational late son Donal in Annaduff on Monday night.

Fionnbar Walsh provided a fascinating insight into the life of his inspirational late son Donal in Annaduff on Monday night.

It all started on what must have been a nightmare day for the Walsh family when, at just twelve years of age, their sport mad son was diagnosed with Osteo Sarcoma (bone cancer) in his tibia.

From the start it was evident Donal wasn’t about to take things lying down. An operation gave him a prosthetic knee limiting his capacity to play the contact sports of Gaelic football and rugby he loved so well, but even after nine months of chemotherapy Donal returned to the playing field to take up the challenge of coaching his peers.

As Donal’s father recalled he put them through his paces and they never once questioned him because they knew he had just put himself through a whole lot more.

In February 2102 the cancer returned, this time to his lung. A second major operation saw half of his lung removed while another round of chemotherapy thrashed his system once more. Instead of easing into it he kicked back harder and in order to increase his lung capacity he took up cycling to assist his rehabilitation.

But cancer can be a cruel mistress. In October 2012 Donal was diagnosed for the third, and ultimately final, time with tumours in five places and a further number of lesions.

He was given weeks to live and with Christmas just weeks away an early family celebration was recommended by his surgeon just in case. He would live to see another May Day but passed away peacefully at home some days later.

Donal was a keen wordsmith with a turn of phrase the defied his limited years and life experience. He clearly exhibited high emotional intelligent drawn from a reflective, philosophical nature that allowed him to face his own mortality with the sort of dignity and acceptance generally associated with an enlightened spirit or someone at the end of a long and fruitful life.

While his story and inspiration raised hundreds of thousands of euros to support the introduction of appropriate designated facilities for teenagers in palliative care at centres around the country, it was probably his message about embracing life and living it to the full that captured the nation’s imagination the most.

It came at a time the country was engaging in a growing conversation about the mental health of our nation and especially the high number of suicides amongst young men especially.

Donal wrote about his anger at teenage suicide while he was battling to get as much out of his limited days on this planet. The causes of suicidal ideology and thoughts are complex and multifaceted yet according to another speaker on the night, a representative from the charity Console, the reason for taking one’s own life is singular and consistent – it is an attempt to end the psychological turmoil and pain the individual is experiencing.

Unfortunately what such individuals fail to realise (because of their inability to think straight due to that very turmoil) is that suicide is a permanent solution to a temporary problem.

Thankfully we have countless examples of people who have found themselves on the brink of such a desperate act only to finally reach out for the help they so desperately needed. If that brave step is then followed up by accessing the support and assistance appropriate to their particular situation, they often find that the pain and turmoil too can pass at least long enough to let in the light that lets hope flourish.

It was great to see the local community turn out in such strong numbers to support the Annaduff club’s efforts to expand their positive influence into the wellbeing space. You could have heard a pin drop during Fionnbar’s emotional and heart-wrenching story. He can be proud that his son’s legacy lives on and strong. To learn more visit http://donalwalshlivelife.org/

If you have been affected by any of the issues discussed in this article or have been bereaved by the suicide of a loved-one please call Samaritans on 116-123 or Console on 1800 247-247.