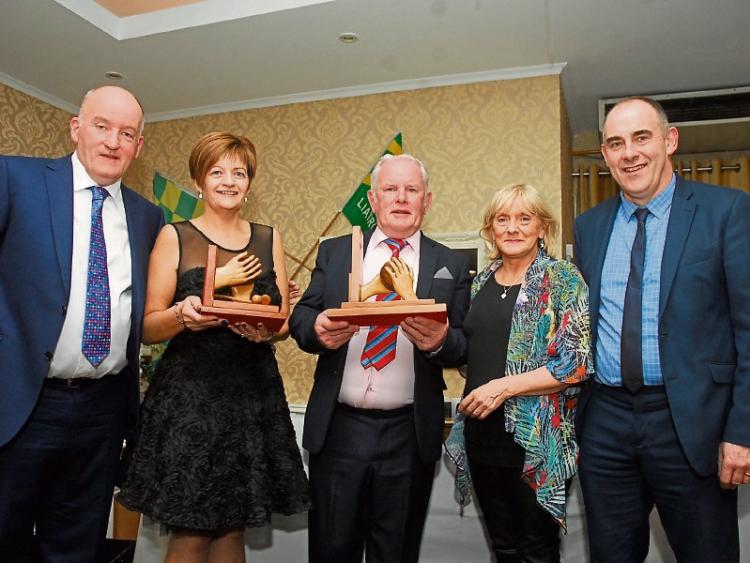 Gortletteragh’s Mickey Dorrigan joined a long list of Leitrim greats who were honoured with the Jim Lynch Hall of Fame Award at last Saturday’s Leitrim GAA County Board Awards at the Bush Hotel.

Presenting the award, Eamonn Duignan of the Leitrim Supporters Club in Dublin said “This award means a lot to the supporters in Dublin, & to the recipients who are recognized for a lifetime of service & contribution to the GAA in Leitrim.

“Throughout his 45 year involvement with GAA in Leitrim, Mickey is most associated with Hurling. He has done immense work over the years with a select band of men and women in keeping hurling alive and relevant in Leitrim.

“Mickey is still actively involved in Leitrim and Gortletteragh Hurling, serving as club senior hurling team manager, and was Cathaoirleach of Leitrim Hurling, a post he vacated in 2016 owing to the five year rule.

“He is regarded as the best all round sportsman to come out of Gortletteragh and tonight the county salute not just a Leitrim legend but a GAA Legend and bestow on Mickey Dorrigan the Jim Lynch Hall of Fame Award.”

Looking back over Mickey’s career, Eamonn believes that the former Leitrim hurler and footballer stands among the most decorated club players of all time just behind Toreen’s Joe Henry with 24, Dublin legend Kevin Heffernan with 21 and Limerick’s Mick & John Mackey with 20 each.

Detailing Mickey’s first introduction to hurling, Eamonn said “His hurling started in the Munster colleges with St. Clement’s Redemptorist College in Limerick where upon being handed his first Hurley, he thought it was some kind of shovel.

“‘Well’, says the team manager, ‘just use it like a shovel and you’ll be fine,’ which he did to great effect a couple of months later when he had to mark the famous Eamon Creegan who was playing with the local CBS in Limerick city.

“Our Hall of Fame winner held the renowned Creegan to a couple of points but managed to go through three of his shovels during the course of the game.

“He went on to play with Leitrim hurlers for over 20 years winning three Connacht junior titles and losing to Meath in one All Ireland final. He was a player with the Mohill based hurling team St. Finbarr’s, helping them to win five county championships and when they went out of existence in 1981, he started up the Gortletteragh hurling club, not with shovels this time but with a set of camogie sticks borrowed from Moyne Community School, and a Kilkenny teacher that was there at that time who gave them a few training sessions. Off they went and have won 11 senior championships since.”

Eamonn also remembered Mickey’s son Stephen who tragically passed away at the age of 24 and who was fittingly remembered when Croke Park named the new All-Ireland U16 “C” Hurling Championship in his honour.