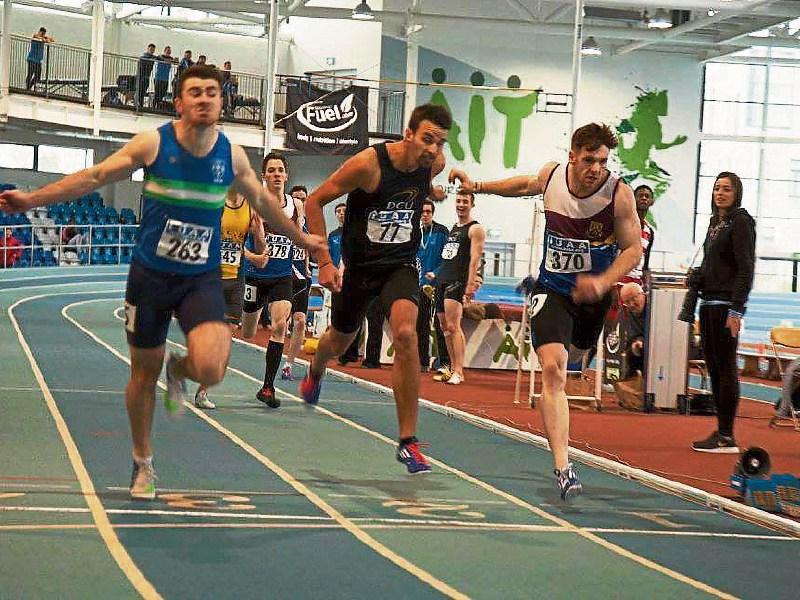 Eanna Madden’s unbeaten run in 2016 came to an end last Friday but only by a matter of inches as he was pipped in the IUAA Indoor 400m.

Running in the colours of the University of Limerick, Eanna claimed a bronze medal in the 400m before going on claim gold for the record setting 4 x 200m team.

The Carrick-on-Shannon AC sprinter probably paid the price for a slightly under-par display in his heat as he only qualified for the final by one hundred of a second, despite winning his heat at his ease.

His time of 50.79 saw him qualify the slowest of the six finalists and it meant a poor lane draw, drawn in lane two with DCU’s Timmy Crowe in lane one.

To compensate, Eanna blasted away over the first lap, covering the 200m in a split of 21.9, a time which would have equalled his personal best just a week beforehand. Unfortunately, the pace started to tell over the second lap.

With Crowe chasing hard some five metres back and Queen’s Andrew Mellon behind him, Eanna produced a fantastic effort, holding onto the lead until a mere ten metres behind the line when Mellon and Crowe sneaked by to deny him the gold medal. His time of 48.23 was still his second best time ever.

Eanna put the disappointment behind him in stunning style as he stormed round the first leg in the 4 x 200m relay for UL, his split of 21.33 well inside his personal best of 21.50 as the Limerick quartet went on to set a record of 1.26.94.

Eanna’s Carrick AC clubmate Cathal McElgunn was also in action in the colours of Athlone IT. Running in the same 400m heat, Cathal ran a season's best of 52.81 as he got caught up in traffic in the final 50 metres.

Cathal also produced a very strong run for the AIT 4 x 200m relay squad as he put in a tremendous second leg for the Athlone IT team, clocking around 22.5.

l Carrick AC’s Gerard O’Donnell had a mixed outing in Ghent last Saturday night, his time of 8.08 for the 60m hurdles down on his seasonal best but considering he hit the first two hurdles very hard, it was nevertheless a strong performance.

l The focus next weekend will return to Athlone but this time, it will be the chance of the county’s juveniles when the Western Region Indoor Championships are held. Saturday sees the U12 & U13 Boys and Girls with the U14 to Senior athletes on Sunday.