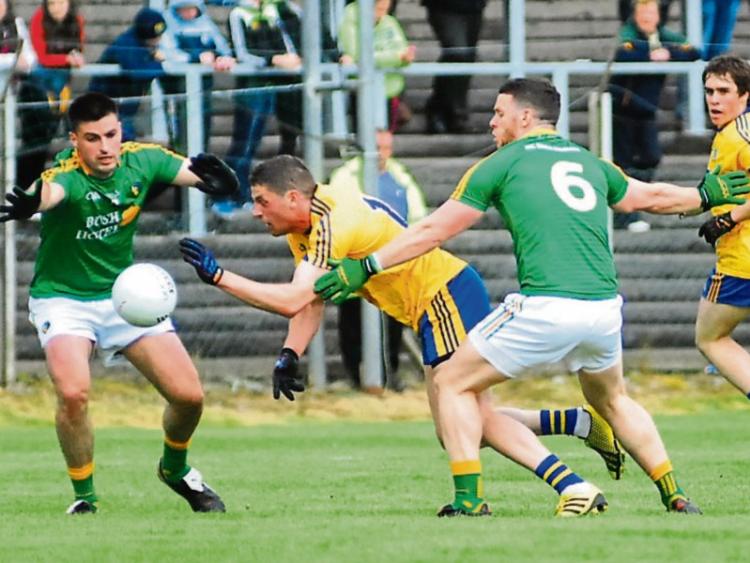 The worst fears of Leitrim fans came to pass on Sunday as a driven Roscommon steam-rolled the home team by 14 points in Pairc Sean Mac Diarmada as Leitrim incredibly ended the game with just 12 players to rub salt into the wounds.

Driven by their near miss against New York, Roscommon were obviously determined to send out a message to their own supporters and they did just that as their pace, movement and fitness proved too potent a combination for a labouring Leitrim.

Shane Ward’s team tried to capitalise on uncertainty in the Roscommon ranks but the difference between a team who plied their trade in Division One and a team who finished seventh in Division four was all too stark to see.

Leitrim ended the game with 12 players when Glencar/Manorhamilton duo Darren Sweeney and Killian McGriskin both received red cards while their clubmate Adrian Croal could not be replaced as Leitrim had used six subs by the time he was black carded.

Leitrim also lost captain Gary Reynolds to a black card and Matthew Murphy to injury in the first half and what started as a mountain for Leitrim to climb rapidly became Mount Everest.

Leitrim actually opened the scoring when good work from Sean McWeeney and Shane Moran released Donal Wrynn into space and the Fenagh St. Caillin’s man strode forward to thump a fine effort over the Roscommon bar.

Emlyn Mulligan surprisingly put a scorable free wide but Roscommon weren’t finding the target either as Ciaran Murtagh missed two chances and Conor Devaney had a wild effort while Sean McWeeney was badly off-target for Leitrim.

When Roscommon found their rhythm, they were devastating as they hit five points in four minutes, started off when Ciaran Murtagh and Cathal Cregg combined to set up Diarmuid Murtagh for Roscommon’s first core.

A great catch from the kickout saw Roscommon work the ball to Cathal Cregg for a point that was all too easy before Niall Daly drove a loose ball over the bar after a high Donal Shine ball broke loose.

Shiine got on the scoresheet, under no pressure, on 12 minutes, and Diarmuid Murtagh added another as Roscommon were suddenly four points clear.

Matthew Murphy’s involvement came to an end through injury, his Ballinamore clubmate Keelan McHugh replacing him and Leitrim struck back when Kevin Conlan soloed through and scored a great point on 15 minutes.

Leitrim grabbed another point when two Roscommon defenders ran into each other to give Emlyn Mulligan room to score but he still had to score from a very tight angle, which he did with style.

Brendan Flynn intercepted a ball ahead of Shine while Shane Moran had a poor shot at the other end as Roscommon continued to miss frees before Ciaran Murtagh pointed a placed ball after a high Gary Reynolds foul on 24 minutes.

Kevin Conlan broke through a tackle after a quick free to point to leave two points between the teams but Roscommon quickly and ruthlessly killed off the tie in their next attack.

Three Roscommon players broke through and they virtually walked the ball into the net, Conor Devaney taking the shot that went into the net off the despairing dive of Micheal McWeeney.

It got worse for Leitrim as Gary Reynolds was black carded for pulling down Ciaran Murtagh, Donal Shine pointing after a short free and Roscommon would add further points from Conor Devaney and Ciaran Murtagh as ROscommon were quite easily getting scores without any pressure.

Nevin O’Donnell converted a 50 yard free deep into added time to leave the halftime score at 1-11 to 0-5 and a mountain to climb for Leitrim.

Leitrim made changes at halftime - Conor gaffney and Darren Sweeney were introduced to go with first half subs McHugh, Killian McGriskin and Barry Prior and it seemed to get a reaction as Leitrim grabbed the first two scores of the second half.

Emlyn Mulligan put over a free after a foul on Gaffney and Adrian Croal scored a nice point after good work from Mulligan but Roscommon responded when Micheal McWeeney was penalised for a late hit on the shot and Fintan Cregg put over the placed ball.

Roscommon’s wides continued to mount up with four more misses while Killian McGriskin was yellow carded. Emlyn Mulligan had a long range shot drop into the keeper but Roscommon broke upfield for Cathal Cregg to fire over on 14 minutes.

James Rooney and Ronan Kennedy worked hard to keep a chance alive for Kevin Conlan who pointed but all hope was extinguished when Darren Sweeney received his marching orders on a straight red card.

Roscommon’s John McManus tried to get to a through ball but Brendan Flynn dived out, feet first and risking a foot-block, saving the shot and knocking over McManus. The two players clashed and Sweeney went in.

When the incident was over, Derry referee Barry Cassidy sought out Sweeney and, on the advice of his umpires, issued a straight red card.

Leitrim tried to work a goal chance but Adrian Croal just couldn’t get to a high ball ahead of Roscommon keeper Geoffrey Claffey, Roscommon responding with a Fintan Cregg point.

Keelan McHugh did well to break forward and get onto a quick free to point but Fintan Cregg added a brilliant point before Brendan Flynn prevented a certain goal with a good save from Donal Shine.

Leitrim’s day got rapidly worse as they lost two players in the space of a minute - Adrian Croal can have little arguments with his black card for pulling down a defender while Killian McGriskin received a straight red after a high challenge that ended the game for Cathal Cregg.

Roscommon were now not even bothering to go for goals and they added points from Cathal Shine, Fintan Cregg, Ronan Daly (2) and Ciaran Murtagh with only a Mulligan point in response.