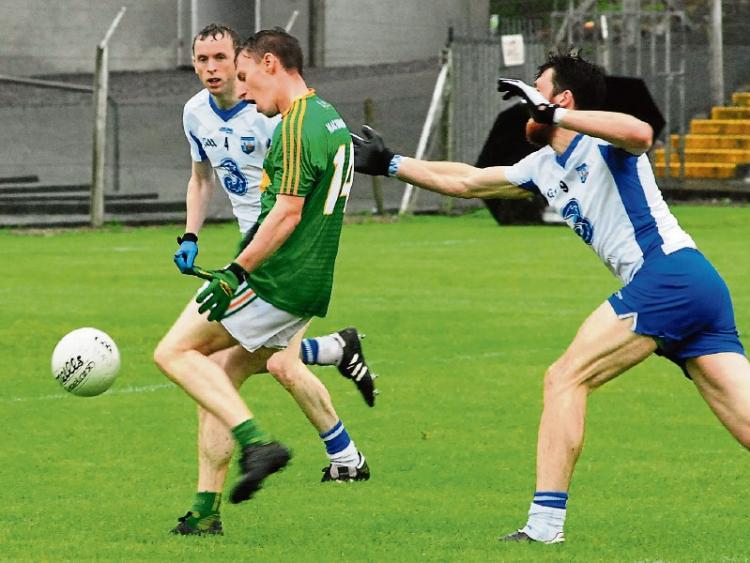 Leitrim recorded only their second ever win in the All-Ireland Football Championship Qualifiers when they proved too strong for a poor Waterford in a drenched Pairc Sean Mac Diarmada.

A superb Ronan Kennedy led the way for Leitrim on a rain-soaked pitch as Leitrim opened up an eight minute lead midway through the second half only for Waterford to launch a late rally that cut the gap in half.

In truth, Leitrim were never under real threat as Waterford, despite a lot of possession, were unable to break down a resilient and tight Leitrim defence and with Kennedy in such inspired form in attack, the Green & Gold were able to get the scores that mattered so much.

The victory, only the second ever win for Leitrim in the Qualifiers after the win over Wicklow four years ago, will alleviate the pressure on Shane Ward but the manager will know that much, much tougher tests await in the next round.

Waterford started with a wide from Gavin Crotty before Emlyn Mulligan, in space, scored a fine point to open the scoring 80 seconds into the game. The visitors were unhappy when a Crotty effort, that looked to have crept in from the press box, was disallowed by the umpires.

From the kickout, Leitrim broke quickly, a long ball knocked down by Donal Wrynn to the waiting Ronan Kennedy who scored in style.

Waterford opened their account with a well worked Crotty score on seven minutes but another high ball was worked back to Ciaran Gilheany for a fine point a minute later while Adrian Croal was unlucky with a good effort on the near side.

Poor defensive work saw Patrick Hurney put over a free to leave a point between the team with ten minutes of the half gone while Liam Lawlor spurned a good chance, putting it wide across the goal.

Leitrim were missing chances too - Mulligan put a free wide, Croal saw a shot held by the keeper and Ronan Kennedy had a poor shot while Crotty saw a shot fielded by Brendan Flynn.

Waterford keeper Stephen Enright spilled an errant Shane Moran shot out for a fifty and was punished when Ronan Kennedy swept the fifty straight over the bar, Emlyn Mulligan adding a point from a 52 yard free a minute later.

The strength of the wind was not helping Waterford as Joey Veale put a free from out on the wing wide across the far side while Crotty saw a shot hit the post and go wide.

It got worse for Waterford as Patrick Hurney never got a 14 yard free off the ground, keeper Brendan Flynn alert to clear the ball and start a move that should have led to a Leitrim goal at the other end.

The ball was worked to Ronan Kennedy but as he pulled the trigger, a flying block from Maurice O’Gorman took the power out of the shot and keeper Enright got a foot to stop the ball.

Michael O’Halloran was yellow carded but Waterford should have goaled from an unlikely source as Tadhg O hUallachain and Thomas O’Gorman cut through the Leitrim defence and were about to pull the trigger when the conditions caused the Waterford men to lose control of the ball and the chance was gone.

Sean McWeeney broke clear, sending the ball long and low to Ronan Kennedy who provided the first real class of a dour encounter when he swept over a wonderful point from the right wing.

And he repeated it in added time as the Mohill man reacted smartly to a quick free from Mulligan and pointed to leave Leitrim a 0-7 to 0-2 halftime lead.

Waterford would have the wind howling behind them in the second half and a five point lead didn’t seem particularly impressive but Leitrim and Ronan Kennedy in particular set about upsetting those expectations.

Perhaps Waterford’s decision to make three halftime changes caused them some hesitancy but Leitrim immediately took advantage, Ronan Kennedy pulling off an outrageous chip-lift to gain control of the ball before he swung over from 30 yards just 45 seconds into the second half.

Kennedy would add a free on 37 minutes and suddenly Leitrim had a seven point lead while Waterford’s hopes were dealt another blow when Joey Veale was black carded for a cynical late challenge.

Leitrim could have ended the game six minutes into the half - Thomas Mulvey broke through the middle but was closed down just as he shot, two Waterford men blocking the ball which then squirmed loose where Paddy Maguire pounced.

The Leitrim defender went for a point but the strength of the wind meant the shot dipped, crashing off the crossbar.

Adrian Croal reacted superbly, diving in to fist the ball down low to the ground - a goal looked certain, Leitrim fans started to celebrate but keeper Enright managed to get his foot to the ball before it crossed the line.

Waterford ended a 32 minute spell without a score a minute later when sub Shaun Corcoran pounced on a lax clearance to point but Leitrim responded in style when a foul on Ciaran Gilheany was punished by a Mulligan free.

Leitrim changed freetakers a minute later but the result was the same as Kennedy swept over another free while Waterford’s cause was not helped by one umpire seemingly signalling that Marcus Ferncombe’s shot had gone over before changing his mind and the point not being given.

Shane Moran and Mulligan both missed chances, Gary Reynolds picked up a yellow as Ferncombe thumped over a fifty yard free. But again Leitrim responded with Donal Wrynn shot a great score from distance to leave Leitrim eight clear with 15 minutes left.

Keeper Brendan Flynn had a strange 30 seconds when the ball from a low shot nearly squirmed underneath him, understandable in the wet conditions but he then tried to play the ball out to a defensive colleague in the corner but the ball went out for a Waterford fifty.

Gavin Crotty had two chances at the fifty as the first effort was tipped out for another fifty but that went well wide. The Munster men started to pile on more pressure but had two wides but Leitrim were not any better with Enright grabbing a shot from Gilheany and Kennedy (free) and Moran both off target.

Liam Lawlor then scored a monster point from over 50 yard despite an attempted block that must have been millimetres from preventing the shot.

Leitrim fans started to get a little nervous as Waterford cut through the defence but halftime sub Barry Prior made a timely interception with an unmarked player in front of the Leitrim goal.

Waterford missed another free before Mark Ferncombe fired over two frees in as many minutes but the clock was very much against the visitors, the second score coming with just over two minutes left.

Ryan O’Rourke made his Leitrim debut when he replaced the exhausted Gilheany in the first minute of added time while Lawlor added his second point after a short free was played back to him.

The rest of added time was a collection of yellow cards with Tommy Prendergast and Thomas O’Gorman from Waterford joining Emlyn Mulligan in the referee’s book as the paltry Leitrim support celebrate loudly at the final whistle.