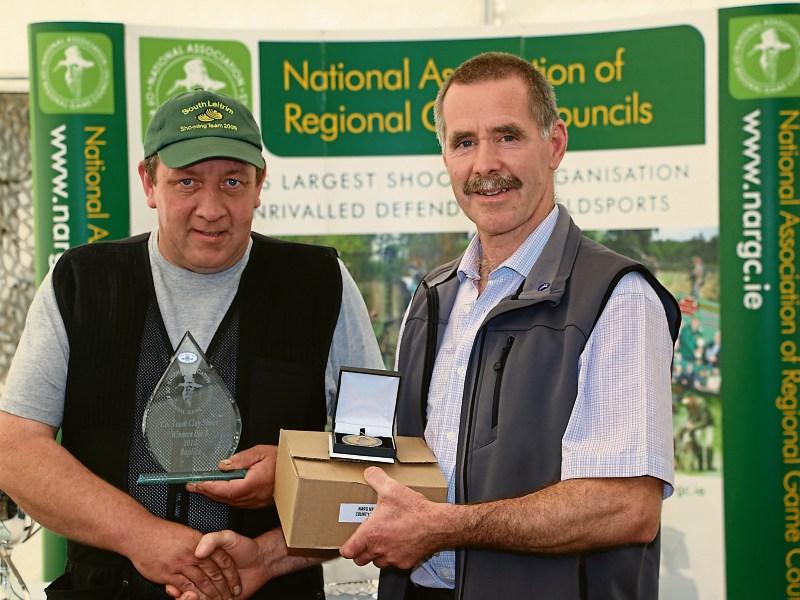 An old saying is that ‘Little is achieved without discipline’ and this rang true for the South Leitrim Regional Game Council team at the All Ireland NARGC Clay Shooting Championships on Saturday, July 9 July in Ardee, Co Louth.

The Leitrim team reached new heights in taking home the national title in their division fending off the challenge of nearest rivals to secure their first ever gold medals in the Inter County team competition.

The well drilled Leitrim team, who were one of the first teams to shoot on Saturday morning, had to wait until late afternoon to confirm that they had secured the division three national title.

The South Leitrim county team co-ordinated by team captains Andrew Cullen and Sean McPartlin is made up of shooters from different Leitrim gun clubs selected in advance from county trial shoots.

This annual national NARGC event is attended by over 700 shooters over two days annually and continues to grow in popularity nationally.

With some of Ireland’s top International shooters scattered throughout the teams, competitions are held for Inter county, Inter club, Ladies, Veterans and trainee licence holders over the two days. In normal conditions the 50 bird course over eight shooting stands in Ardee shooting grounds would be deemed technically difficult and with limited chances to shoot the targets, there were no second chances.

The Leitrim team ,well-adjusted and acclimatised to the wet summer here in Leitrim, had a shaky start with some difficult targets but a tour de force finish returned a higher than expected team score to the Registration office.

By late afternoon, the team were confirmed as division winners with the national title in the bag amid unbridled joy and a great sense of accomplishment making it a very special weekend for all the Leitrim shooting people.

Andrew Cullen also secured the Leitrim High Gun trophy as the highest score on the Leitrim team listing. Well done to all involved and remember the harder you practice, the luckier you get is surely true.

A six man team from the Drumshanbo gun club were the Leitrim club representatives on Sunday, July 10 in the inter club competition and despite a strong performance did not make the winning platform this year.

The County was also represented by the ever popular Anthony Reynolds from Aughavas and Roy Adam in the Veterans competition and Andy Pitts in the side by side competition.

A special mention must be reserved for all the lads in the Drumshanbo and Newtowngore shooting grounds for all their support to our teams in the county trials and competitions in the run up to the national finals.

The next local clay shoot will be on Sunday, August 7 at 11am in Drumshanbo shooting grounds. All are welcome to participate and especially any novice shooters.

You can contact the Secretary of the Game Council atleitrimsouthrgc@gmail.com or Shane Reynolds on 087 9751993.