From fun runner to the Rio Olympics 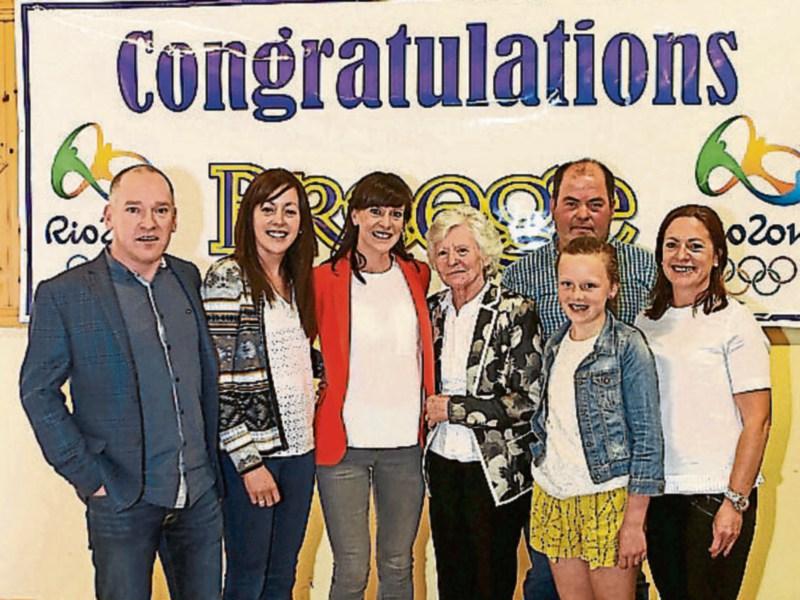 Many may see the Olympic Games as an unattainable goal but Breege Connolly is a believer in positivity and hard work as she declares “If I got here, anyone can get here”.

For those not fully aware of Breege’s story, the Kinlough woman only took up running at the age of 23 as a way of making friends in a new city when she moved to Belfast. And she only took up marathon running seriously a little over four years ago yet next Sunday, Breege will line up among the world’s best runners.

And it is that message that Breege is keen to emphasise - “If I got here, anyone can get here. Years ago, I would have looked at the Olympics and it was so unattainable. You still have to put in the work and there is an awful lot of luck involved, I fully appreciate that, but everything is possible but there is nothing to stop anyone in Kinlough or Leitrim or any small county from going out there.

“For people who think I can never do that, for people who need a bit of hope, I know how I got here. Maybe I was lucky that I wasn’t getting pressure from left, right and centre. I was putting my own pressure on myself but today it is a really different world, parents are wanting success more than the children but I came from a house where the motto was do your best. Maybe those little elements have helped me as well.”

To reiterate the point, Breege points out that her Olympic Marathon Qualifying time in London last year came on the back of a bad performance as the North Belfast Harrier sought to prove to herself that she could still run a fast time - “My Olympics became because of a bad marathon, that’s the long and short of it, a bad marathon in Dublin became the driving force for me going to London, that is the reason. It was me trying to prove to myself that I can still run and I can redeem what I saw as a really poor performance from me that day.”

Thirty-eight may seem old in the sporting world but Breege believes she is still relatively young sporting wise - “I was chatting with a guy from the Belfast Telegraph and he asked do you think you get better with age but I can’t honestly say because I wasn’t doing it when I was younger. I can’t really say I’ve dramatically improved when I got older because I only really started when I was 23 and I only really started competing when I hit my 30s. I think there was a preservation element there for me, you know the younger athletes, maybe their limbs and bones don’t stand the test of time.”

Coached by fellow North Belfast Harriers clubmates Martin Deane & Paul Elliot, it was a desire to improve her own performances rather than any lofty ambitions that drove the Kinlough woman to the Olympics - “I started off as a fun runner but I don’t think that realisation ever really hit that I could one day qualify for the Olympics. I joined up with Marty and Paul four years ago and at that time, I think they believed I would qualify for London 2012 whereas that wasn’t even on my radar going into Rotterdam (in 2014), my idea going in was just take some time off my pb, that was always my aim with every marathon, take down my pb, take down my pb and see what comes with that.

“Then I think you always move your own goalposts, years ago, I would have looked at athletes like Pauline Curley and go ‘oh my God’. Then over time, you get closer to that time. You are always shifting the barriers as you get closer to those times you thought were incredible.”

Motivated by a desire to better her own best, Breege admitted that chasing elite times never crossed her mind - “I don’t think I was ever consumed by times, it can be a real consumption. I had no realisation of what I was achieving, I remember running a ten miler in Dublin years ago and I could hear a man on the PA go ‘she just did it in under an hour’, I had no realisation what that meant.

“I had no idea if that was good, bad or indifferent. I think I was blessed with naivety until such time you become more aware and that awareness brings it’s own more things. I escaped being very naive for a long time.”

Those days of blissful ignorance of what she has achieving are long gone but Breege takes great enjoyment from a more focussed approach - “Both approaches bring their own enjoyment. I think being naive is oh wow, that time is after coming. Maybe then, it is the element that when you are more aware, being able to push yourself a little bit more and knowing that you can push yourself.

“But there is a lovely thing, I always say to everyone doing their first time marathon, enjoy this one, enjoy the unknown because once you have the first one done, the unknown is gone forever more. I would take that approach, enjoy this long run, enjoy this session because you are in this privileged position, to be training for an Olympic Marathon.”

And that sense of enjoyment and good fortune is seemingly central to Breege’s philosophy - “When you look at Sligo’s Mary Cullen, she is one of Ireland’s best runners, she’s incredible but there is someone like Mary who is not on this plane and in terms of ability, she is simply the best, I think Mary’s time will come. You just have to take stock of how lucky I am to be there.”

Now that the Olympics are upon us, the nerves will be going into over-drive but for Breege, the concentration has been on getting the work done over the last few months since she was selected on May 23 - “Definitely, it is getting more real. I think back, I got picked on May 23, and after that, you click into the training so what has that been now, six or eight weeks of core training. Thank God, no complaints out of that.

“I think it was a week that has added value, I think it has given me a bit of confidence in the sense that that is a long run in a really warm climate and now I am in the acclimatisation chamber in Jordanstown for the last few weeks to help get my body get used to the temperature and the humidity we might be running in on the day.

“Things like that have been the different aspects of training but other than that, all other aspects of training have remained the same, the same as any other marathons. You are doing your mileage, your long runs, your hill sessions, your speed sessions. Marathon training is just very intense, I can’t talk for sprinters or walkers, I don’t know what that’s like.

“I haven’t really tried to over-analyse things, I think when you start tearing things apart, that is a danger. You are always going to think there is more you could have done but I put the work in and I’ve ticked it off day by day, run the miles and done the work so I’m hoping for the best on the day, I think that is a massive difference with the marathon.”

As for her own targets next Sunday, Breege is simply looking for a performance - “You always go in, and I don’t know if there is any athlete who doesn’t go in whether it is the Olympics or any other event, to do their very best. For me I would love to walk away knowing that I put in a strong performance and handling everything on the day, that is going to be massive.

“The whole build up is different, the whole morning, everything is different and that I handle them well and I can walk away knowing that I put in a really good performance, that I do justice to the training and the people who have helped me. And I will do my best, from the minute I start, I will be putting my best foot forward.”