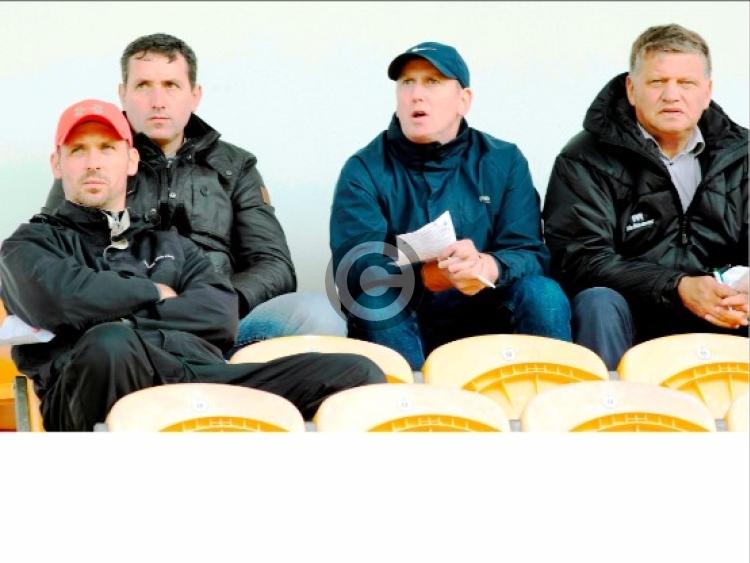 New Leitrim manager Brendan Guckian (second from right) pictured with, from left, Michael Moyles, Seamus Quinn and John O'Mahony. Leitrim are on the lookout for Dublin Club players to join the County.

Leitrim are searching for the new Declan Darcy as the Leitrim Observer has learned that Dublin clubs have been contacted about the prospect of players with Leitrim eligibility lining out for the Green & Gold.

Members of the Dublin branch of the Leitrim Supporters Club have contacted every club in Dublin enquiring about the eligibility of any club players in the capital and surrounding counties who may wish to throw in their lot with the Green & Gold.

Well-known Leitrim Supporters Club officials Eamonn Duignan and Mike Feeney are spearheading the effort to unearth players who could qualify for Leitrim under the parentage rule.

Citing the appointment of new manager Brendan Guckian and his backroom team, the letter states “With the new management in place for the forthcoming year, a huge effort is currently being undertaken to improve both the U-21 and Senior squads.”

The letter also states “The new management will meet with any players who express an interest in playing with Leitrim.”

The full text of the letter is:

A new team management structure (U-21 & Senior) for the forthcoming year has been appointed by the Leitrim County Board.

You may have noticed a lot of Dublin Club players/border county panelists are switching allegiance to the county of their parents.

Over the years, a number of players have declared and played for Leitrim including Brendan Gallagher (Leixlip), Jason Ward (St. Brigid’s), Kieran McGovern (St. Jude’s), Cian Reynolds (Athy) and Declan Darcy who captained the Leitrim team to Connacht Championship success in 1994 played for Leitrim under what is called the Parentage Rule.

With the new management in place for the forthcoming year, a huge effort is currently being undertaken to improve both the U-21 and Senior squads.

We are asking if you know any footballers born to Leitrim parents, please pass on their details to Eamonn Duignan or Mike Feeney.

The new management will meet with any players who express an interest in playing with Leitrim.