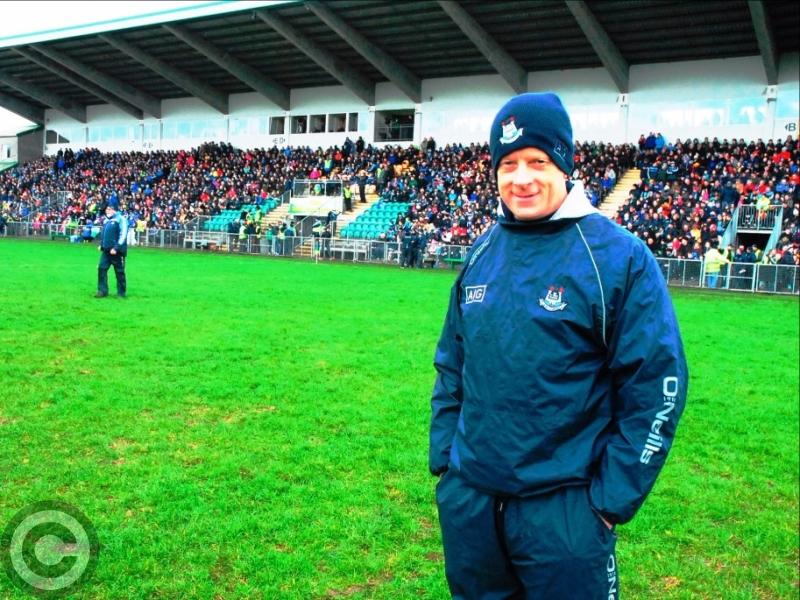 Declan Darcy was on Dublin duty earlier this year in Pairc Sean Mac Diarmada - Leitrim will be hoping to entice the next generation Declan Darcys to join the Green & Gold! Photo by Willie Donnellan

Leitrim fans may well be casting interested glances at this year’s Dublin Senior Club Championship with a good deal of Green & Gold interest in this week's Quarter-Finals in Parnell Park.

Five players with Leitrim connections saw action in the Dublin Championship Quarter-Finals on Wednesday and Thursday evening in Parnell Park, a championship regarded as the toughest in the country as they have provided four All-Ireland winners in the last ten years.

Our story last evening attracted quite a deal of interest online and with the Leitrim Supporters Club contacting Dublin Clubs with a view to recruiting Leitrim eligible players for the Green & Gold Senior team, manager Brendan Guckian may have fertile ground for recruitment.

Castleknock marched into the semi-finals with a comprehensive 2-14 to 0-10 victory over Skerries Harps and features a strong Leitrim connection with former Leitrim and Aughawillan goalkeeper Thomas Quinn a selector for the club who is only 18 years in existence and who have already won a National Feile title and reached the All-Ireland Intermediate Club Final.

Quinn’s son Tom, a player often linked with Leitrim, lined out in midfield while former Leitrim Minor Colm Neville started at corner-back for the Castleknock men.

And it seems that Castleknock is becoming something of a second home for Aughawillan men in the capital as former Aughawillan player Seamus McKiernan is also involved in the backroom team while Seamus's son Darragh also played with Leitrim Minors in the past. Special thanks to Thomas Quinn for the update.

The local connection with Castleknock even extend across the border to Roscommon as Kilmore native and former Carrick-on-Shannon Community School pupil Kevin Stritch trains the team, having had experience previously with St. Vincent's.

The Leitrim connections don’t end there as Chris Guckian, a cousin of former Leitrim star Jimmy Guckian and son of Sean Guckian from Carrick-on-Shannon, lined out at centre-back for the St. Jude’s team who defeated a highly fancied Kilmacud Crokes side, also on Wednesday.

Guckian unfortunately lasted only 25 minutes of St. Jude’s 0-14 to 1-8 victory over a Kilmacud side who featured Dublin stars Paul Mannion and Cian O’Sullivan while Kevin McManamon is a key player for the Templeogue club.

There was no joy for a Lucan Sarsfields side who featured two players with Leitrim Senior team experience on Thursday night against Diarmuid Connolly’s St. Vincent’s.

Brendan Gallagher, who saw a lot of game time under manager Mickey Moran, scored 1-4 against the famed Vincent's, including a penalty for Lucan in the 1-14 to 2-8 loss to the former All-Ireland Club Champions while among the Lucan players is former Leitrim U21 and Senior squad member Keith Moran.

Thanks also to Dowra's Alan McGovern who got in touch to point out that Dublin super sub Eoghan O'Gara also has Leitrim connections with his mother hailing from Drumshanbo. O'Gara's younger brother Killian lined out last year with Dublin U21s before an ankle injury ended his involvement in the campaign.

Gallagher, Neville and Moran already have lined out with Leitrim at various grades but there is a lot of speculation and hope that Quinn, who was a member of various Dublin underage squads, might join his father’s county as Leitrim hope to unearth the next Declan Darcy or Jason Ward.