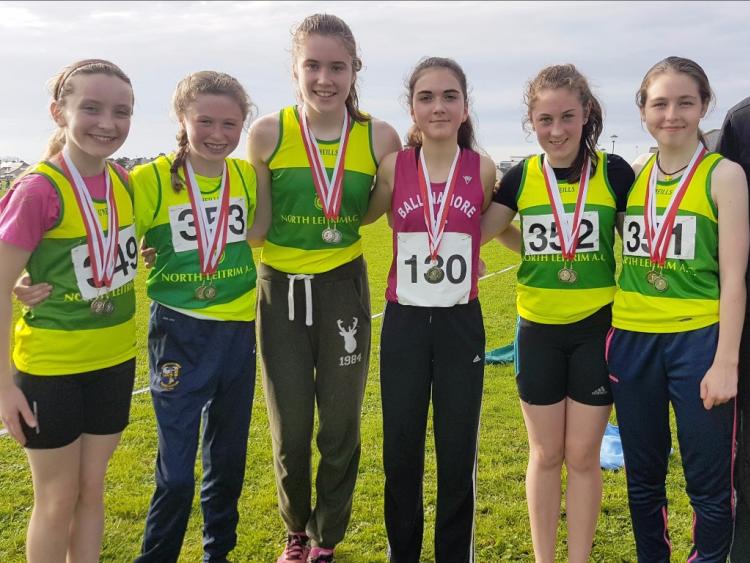 Ellie O'Rourke was the stand out Leitrim performer as she claimed a dominant victory at Sunday's Connacht Even Ages Cross-country in Galway.
Claiming her first Connacht individual cross-country title, the Ballinamore AC athlete executed the perfect tactical race as she stormed to a convincing win on the fantastic new South Park course beside Claddagh in Galway city.
There was also a Leitrim winner in the Novice Men's Connacht League race when North Leitrim's Ryan Owen finished fourth and first Novice Man in Galway.
The U14 Girls age group was very productive for Leitrim as the club title was brought home by North Leitrim who dominated with two top ten finishers and four inside the top 20 to beat off the best teams from Galway and Mayo.
O'Rourke victory in the third race of the day was very impressive as she got off to a fast start and quickly put herself among the leaders. Close on her heels was North Leitrim duo Sarah Brady and Ella McDaid who may have ended up paying for the quick start.
Running with Westport's Roisin O'Brien, GCH's Eimear O'Brien and Longford's Kate Hagan, the top four quickly distanced themselves from the chasers with North Leitrim's Niamh Carolan starting to come through the field as she passed her teammates.
With 1,000m to go, O'Rourke put in her first sustained burst that took her clear before really putting the boot down in the final 400m. Behind her, Niamh Carolan timed her race to perfection as she came through very strongly and caught athletes burned off by O'Rourke, claiming a brilliant fourth in the process.
Aisling Cullen also came through strongly to finish in the top ten in ninth place for a place on the Connacht team with Sarah Brady just missing out in 13th with Ella McDaid 20th. North Leitrim's team was completed by Lara Mulvaney Kelly in 23rd as they had a dominant win with 46 points to GCH's 60 while Leitrim were second in the county race with 70 points, just one ahead of Galway and nine behind Mayo.
Ryan Owen was fourth across the line in the Connacht Senior League race and first novice, maintaining his lead after two legs while clubmate David Lipsett finished 32nd.
Fiachra Henry was the next highest finisher with 11th in the U16 Boys race, a fast start maybe costing him a few more places after a strong and battling run. His clubmate Anna Corcoran finished 12th in the U16 Girls as she worked hard to hold onto her place on the Connacht team.
In the Adult Ladies League race, Mohill & District's Susanne O'Beirne finished 15th overall and fifth Master with North Leitrim's Fiona Langan 21st overall and third novice to take second in the overall League.
North Leitrim's Ellie Finan finished 24th in the U12 Girls as she just pipped Drumshanbo's Claire McWeeney by one place with Mohill & District's Sara O'Beirne 54th in the biggest race of the day.
Darragh Mitchell was also 24th in the U14 Boys race as he finished ahead of clubmate Hugo Filan in 27th with Carrick AC's Iarlaith O'Brien 30th and Drumshanbo's Danny McWeeney 34th in a fast race. Leitrim's final competitor was Edward Mitchell in the U12 Boys where he finished 43rd.
The action moves next Sunday to Westport House for the Connacht Uneven Ages Cross-country (12 noon start).