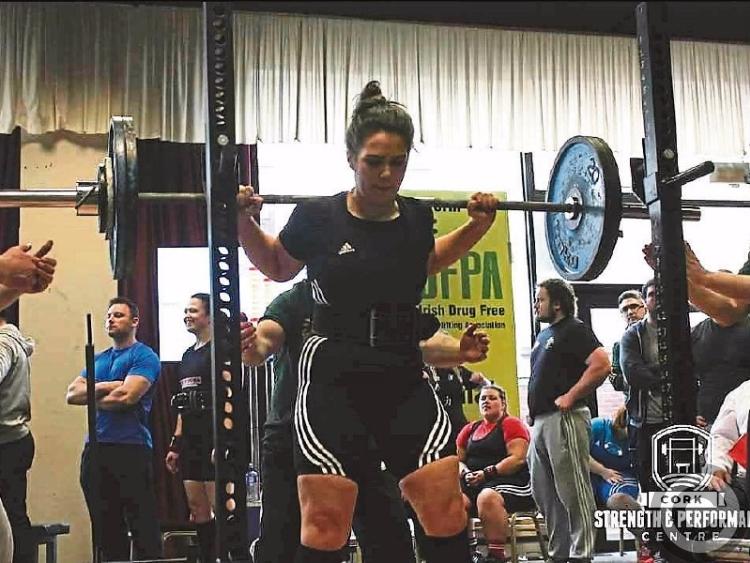 Ballinamore's Aoibheann Boyle will be competing in the WDFPF Powerlifting World Championships on Saturday in Riva Del Garda, Italy, just two years after taking up the sport

Two years after dropping out of her course in University College Galway where she was studying for a science degree, Ballinamore’s Aoibheann Boyle has put that disappointment behind her and is now just days away from competing in the WDFPF Powerlifting World Championships in Italy.

Recalling the experience in 2014 that led to her going to the gym in Ballinamore for the first time Aoibheann recalled, “I dropped out of college, I was unhappy and came back to Ballinamore but I didn’t know what to do with myself.”

While unsure about what to do next, her brother James (who managed the Oughteragh Ladies this year) encouraged her to join him in the Ballinamore Sean O’Heslin’s gym.

“Initially I was going three times a week, then I was going six times a week within two or three months. James gave me a plan that he got from the internet but as I did more lifting and read more about it I was able to form a plan of my own.”

Explaining how the fitness regime became more enjoyable as she began to see the benefits of her hard work Aoibheann explained, “I began to love it after a good four months of training three times a week.

“Once I enjoyed it I started training six times a week. It was only when the first few pounds came off that I really realised the severity of my weight problem and how I needed to shift the weight as soon as possible. I started reading books and educating myself on getting stronger and losing fat, I would watch videos on how to squat, bench and deadlift correctly. I surrounded myself with it and I loved it all the more.”

Mental and physical wellbeing are all benefits to regular physical exercise and Aoibheann acknowledged the reason for her initially taking up weightlifting was to lose weight. Little did she realise when she first started lifting on November 7, 2014 just how beneficial it would prove to be.

“It did it to lose weight, I was 19 stone when I started and over time the weight fell off and I have felt stronger.”

As she became more engrossed in the sport Aoibheann became more aware of the importance of losing weight and she said concentrating more on what she ate was key to her success.

“I tightened up my nutrition, started weighing everything I ate and tracked every single calorie. This was the game changer. The weight started to fall off and seeing the weekly changes in my body was incredible, this was the motivation I needed to drive me on to train harder and eat smarter.”

Having a world champion training alongside her in the Sean O'Heslin's gym was something Aoibheann acknowledged was a real help.

“It was great that Spike McCormack was also training in the gym and he was a great help.”

After months of hard work in the gym Aoibheann took the decision to lift competitively and in May 2016, exactly 18 months after first stepping into the gym in Ballinamore for the first time she not only took part in the IDFPA Full Power Powerlifting Championships in Dublin, she claimed first place in her weight category. Aoibheann benched 62.5kg, squatted 125kg and deadlifted 150kg.

The 125kg lifted in the squat discipline saw Aoibheann set a junior world record and although that record was subsequently bettered, she is travelling to Italy tomorrow (Thursday) hopeful of going even better.

“The squat, bench and deadlift will all be held on Saturday. I am hoping to win but I don’t know who I’m up against so I’ll be going over looking to do as good as I can. My record of 125kg was beaten with a lift of 131kg shortly afterwards, I'm hoping to beat that over in Italy, that's definitely one of my goals.”

Whatever the outcome in Riva Del Garda, Italy, Aoibheann is delighted to have discovered weightlifting saying, “It’s two years since I started and I don’t know what I would have done without it. It has taught me a lot about motivation and dedication.

“I’m in college now in Athlone doing Sports Science and I never would have found that course without getting involved with weightlifting.”

Having lost nearly six stone since she started in the gym and on the verge of competing internationally, Aoibheann is incredibly proud of what she is achieved but is equally grateful for the support she has received from family and friends.

“I never could have achieved either the weight loss or the winning of the competition without the support of my family and friends who always spurred me on when times were tough. Especially my grandad who supported me from day one, Pete Prior, whose hard work and dedication to gaelic football all his life inspired me and motivated me to be the best I could be in the gym.”