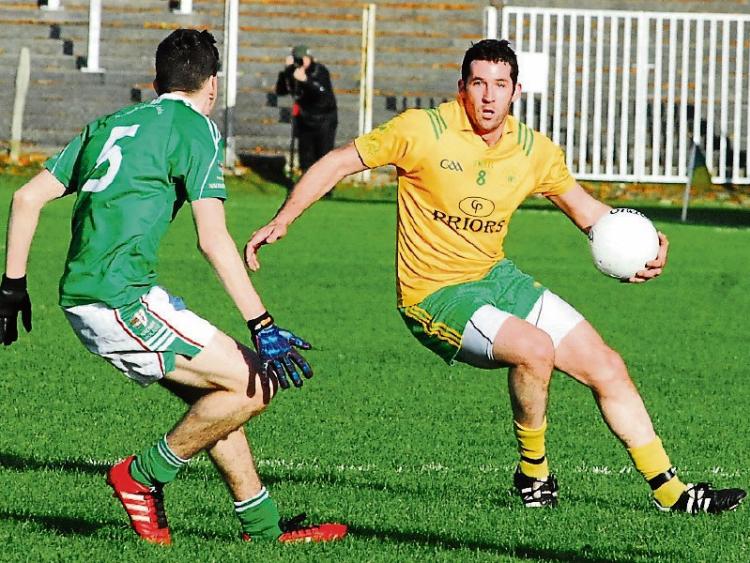 The shackles are off and Ballinamore Sean O’Heslin’s will attack the Connacht Intermediate Club Championship Final with zeal if the words of Wayne McKeon are anything to go by.

A Westport side with Footballer of the Year Lee Keegan in their ranks is the reward for a thrilling win over St. Molaise Gaels but you get the sense that, for the first time this year, Ballinamore’s footballers are playing without pressure.

“We continued on as we said after the final,” said Wayne, “We did what we wanted to do, get back up to Senior level in Leitrim and we said we would come here today and give it everything, take the shackles off and go at them and see what they are made of.

“We’re in bonus territory, there is always going to be pressure but in a Connacht Final, there will be more pressure and every step is a bonus so we’re just going for it.”

The sheer joy in the Ballinamore camp after the final whistle was reflected in Wayne’s answer when asked what he thought about facing Mayo’s talisman Lee Keegan in the Connacht Final - “I think one of the boys were saying I’m going to get a motorbike for Lee Keegan!”

But the tone quickly turned serious - “We’re in bonus territory here, we’ll give it a lash, what do we have to lose? They are a good team but who is around Lee Keegan? That’s the main thing, we have a good team here so we will see what Westport are like and we’ll see what happens.”

Seeing what Westport are like is one thing but Wayne believes the defiance in the second half against St. Molaise Gaels shows exactly what Sean O’Heslin’s are made of - “You could see exactly what we are made of in the first half, we kicked six or seven points, 1-7 or whatever at halftime.

“They were vulnerable and we knew the second half they were going to come at us bit time and we were going to run out of legs there after all the work in the first half. We eventually got over the line and the young lads again, as I said all through the year, and the bit of experience carried us over the line.”

The confidence in the Ballinamore camp is one thing but it is rooted in hard work - “We said at halftime that the first ten minutes, they are going to come hard at us and if they got the first score that we are going to be on the backfoot.

“But we came out and Dean McGovern got the ball straight away, went by two or three boys like he has been doing all year and tipped it over the bar. That set the tone for us for the second half, that was the foundation in the second half for go at them again.

“As I said before, we were going to run out of legs but every time we held onto the ball and gave it in quick, it stuck and there were boys running off the shoulder and we kicked them over the bar and we always kept St. Molaise Gaels at arm’s length.”

Keeping them at arm’s length was a mammoth job but Ballinamore showed great calmness that belied the pressure they were under - “We knew well we were up against it but we knew well that when we did get on the ball, we weren’t giving it away cheaply.

“We were holding onto it and were making them come after us and they had the extra man and that is the thing here, we had to hold onto the ball because if we gave the ball away cheaply, they were going to punish us.

“I think four of their scores in the first half, they took it off us and our bad passes and kicked it over the bar so we had to hold onto possession. Hopefully to go when we got it upfront, we’d either put it wide or put it over the bar and thankfully, the last one there from James went over the bar.”