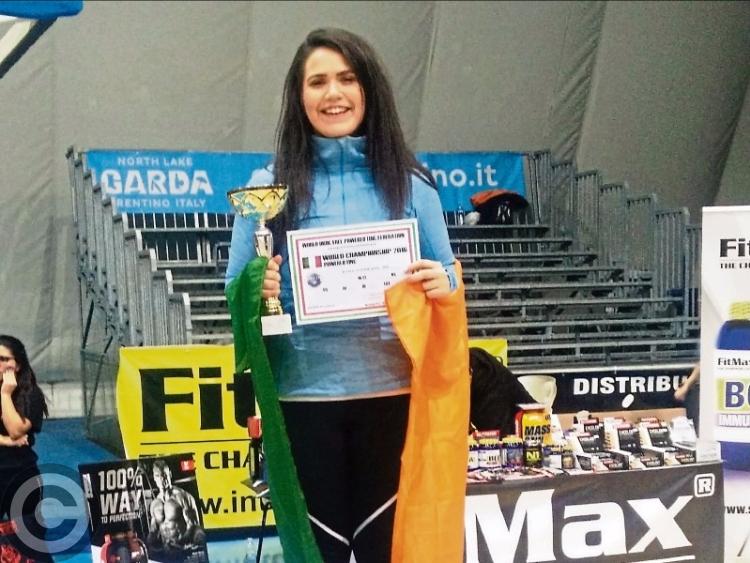 Ballinamore may be focused on Connacht glory next Sunday but they also have a World Champion to celebrate after Aoibheann Boyle set a new world record in literally lifting her way to a World title last weekend.

Sean O’Heslin’s take on Westport in the AIB Connacht Intermediate Club Final next Sunday in Pairc Sean Mac Diarmada (2.00 throw-in) as they seek to become the first Leitrim Men’s team to win a provincial club crown.

And for inspiration, they need look no further than their own clubmate Aoibheann Boyle who, just two years after taking up the sport, won gold in the World Drug Free Powerlifting Federation World Championships in Riva del Garda in Italy.

Speaking to the Observer on Tuesday after her return from Italy, Aoibheann said “My main goal was to go over and beat that record especially because I didn’t get it in my last competition. I was very happy.”

Last week’s article on Aoibheann’s path from Novice to competing in the World Championships generated huge reaction and the Ballinamore woman admits she has been surprised by the enormous reaction Philip Rooney’s article generated.

“There was a great reaction to the article and I still don’t realise what I have done myself. It happened so gradually over the last two years, it has become normal to me now and I just have to look back and realise where I’ve come from.

And reaction online to her victory has been fantastic said Aoibheann who arrived back in Ballinamore late on Monday evening - “The reaction has been amazing, I can’t believe the amount of support I got from everyone around the town, it has been amazing.”

There was double celebration for Ballinamore as Tommy “Spike” McCormack won a bronze as Aoibheann reveals his presence was a huge boost - “Spike was third in a very competitive weight class. It is great to have his experience, he is a great help to me. He’d be shouting “Up Ceannabo” and to me, it meant a lot.”

Focus in Ballinamore now turns to next Sunday's Connacht Final and manager Paul Prior, who welcomed a new addition to his family only last Thursday, is relishing the chance to take on a highly rated Westport side.