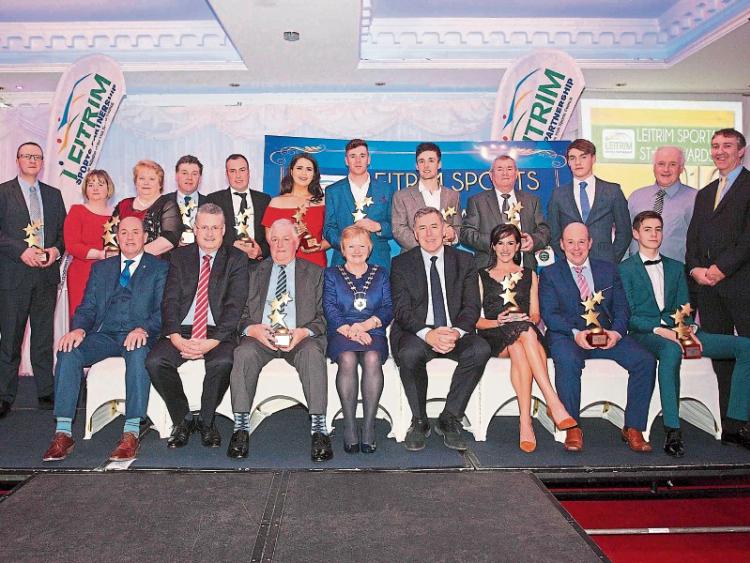 Leitrim might be Ireland’s smallest county in terms of population but just look at Saturday’s Leitrim Sport Star Awards and there is no doubt that the county is punching well above its weight on the national and international stage.

Saturday’s glittering event in The Landmark Hotel, organised by the Leitrim Sports Partnership, celebrated the achievements of the county’s sporting heroes and covered sports as diverse as showjumping to athletics and gaelic football to weight-lifting, from teams to individuals.

Guest of honour Packie Bonner expressed his amazement at the range of sporting excellence on show in Leitrim - “It always amazes me when I come to these things, the amount of sports that is out there for people.

“In our day, it was gaelic and soccer if you came from Donegal, maybe if you came from Leitrim, you didn’t have that much soccer, mainly gaelic but now you have everything. It really is fantastic to see how the sports have developed and it is great to see them get their reward here tonight.”

And the legendary Irish goalkeeper, hero of the 1990 World Cup in Italy, stressed the importance of recognising the achievements of the local heroes - “It is nice to be recognised, isn’t it, you put a lot of work into it and when you are recognised, it gives you a confidence that lifts you and you feel that you are achieving something.

“Of course, there are always losers on a night like this but even to be here on the night, that is where you have to be in sport.”

Overall winner Breege Connolly received a standing ovation as she went to collect her award and expressed her delight to finish off the year with the award, particularly in the face of such tough competition.

“I’m delighted, I really am delighted because there are so many achievements in different arenas,” said Breege who raced the very next day in the National Cross-country championships in Dublin, adding “I know I got to the Olympics but I didn’t know if that would be enough so yeah, it really tops off the year, it tops off a wonderful year.”

If there was a common theme among the award winners last Saturday night, it wasn’t their dedication to their sport, their sacrifices or their achievements but rather their surprise to be picked out as a Leitrim Sport Star for 2016.

Aoibheann Boyle is a newly crowned world champion but she was pinching herself when speaking after collecting the Special Achievement Award - “Years ago if you had told me I would be where I am today I would have laughed. I was sporty enough when I was younger but then I went to secondary school and that dwindled and I wouldn’t have thought I would be picking up a sports award!”

Double All-Ireland Pool champion Lee McSharry was another man stunned as the Drumkeerin youngster explained - “I am very thankful for the award and I did not expect it one bit. People say they don’t expect it but honestly, I had no clue I would get this award. There were some very prestigious nominees in the category so I’m delighted.”

It was a theme continued by John Mulligan who shared the Senior Award with fellow Mohill man Eanna Madden - “A great achievement, it is great to be nominated first and foremost and to be picked alongside Eanna is a great achievement, I’m very happy and pleased with it.”

Eanna was delighted to receive another award, the second time he shared the Senior Star award and the Carrick AC sprinter will use it as motivation for the year ahead - “I’m delighted, It is the time to look back at the year gone past, reflect on that and push forward for the year ahead. It is a great award to be given, a great event and a great night.”

Hall of Fame winner Joe Flynn was another to highlight the contribution of others - “It is a nice award to get but as I said up on stage, it is the people you associate with over the years that kept you involved and motivate you to keep going. I have to say that over all those years, I had great people to work with as footballers, as administrators and that is what kept me going too, we worked as a team always.”

Deflecting attention seems to be almost a requirement for Leitrim’s sports star as North Leitrim Athletic Club’s Tom Kelly, who saw off some stiff competition to be named as volunteer of the year, was quick to praise his fellow nominees and those who volunteer at clubs throughout the county.

“For everybody who gets an award, there is 100 people, I could name people in my club and I could name all the other people who were up for the same award and they are all doing the same things I am doing,” said Tom.

The Men’s Team of the Year was one of the toughest categories with Senior Champions Aughawillan and Connacht Intermediate Club finalists Ballinamore Sean O’Heslin’s in contention.

But in the end, the scale of Melvin Gaels achievement in winning the Club’s first ever Minor A Championship, the first club team from North Leitrim to achieve that feat, was impossible for the judges to ignore.

The final award, the Leitrim Observer Unsung Hero Award, went to Drumshanbo's John Joe Cullen and if anyone lived up to the image of an unsung hero, it is the Allen Gaels clubman, a fitting and deserving recipient of an award that recognises a lifetime of work behind the scenes.