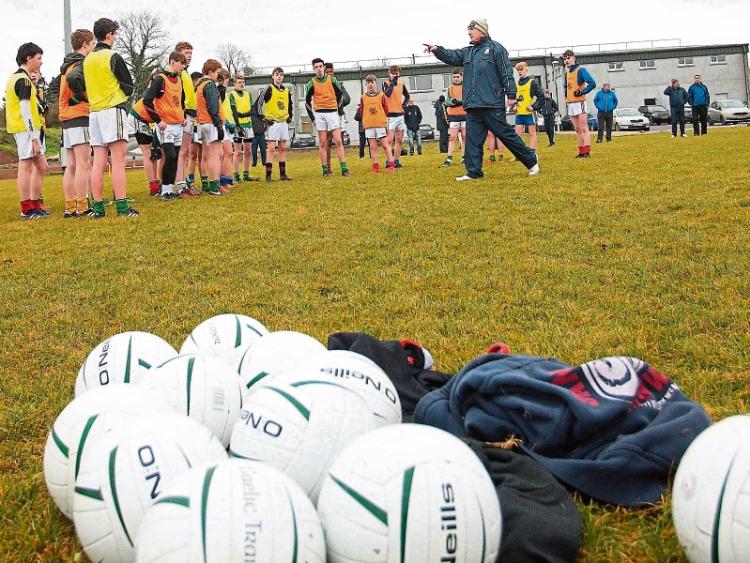 Paddy Christie explains the drills to the coaches and players at the “Deliberate Practice Deliberate workshop” last Saturday. Photo by James Molloy

We talk about tactics, we talk about formations and we talk an awful lot about fitness programmes but do we talk enough about having fun and learning skills in the GAA?

It is a question that you’d have to ask yourself if you were one of the 75 coaches lucky enough to take in a fascinating workshop in the Leitrim GAA Centre of Excellence last Saturday morning as former Dublin star Paddy Christie gave everyone a lot to think about over the off season.

Organised by new GPO James Glancy under the Leitrim Coaching & Games Development committee, only four of the county’s clubs failed to send any representatives and it was very illuminating to see who turned up, just what clubs send large contingents in an effort to learn and improve.

Those looking for magic secrets to Dublin’s success may have left disappointed as a succession of simple drills were performed, without any prior knowledge, by the Leitrim U14 Development Squad in what seemed to be a return to the primary school playground.

But behind the simplicity and seeming randomness of the drills was an undeniable truth - the players were mimicking what happens in a game and having a lot of fun doing it, the gasping for breath more than illustrating just how hard the players were working.

And that is the message the former Dublin Minor manager was trying to impart when he was asked by the Observer if he was in Annaduff to impart the secrets to Dublin’s success - “It doesn’t exactly work like that. What works for one county or one club isn’t always applicable to another county.

“They will take some of the ideas on board and some of them they won’t, they won’t suit them but that is the key, that you take whatever suits you relative to your situation rather than thinking there is some sort of bible there with a load of drills, it doesn’t work like that.

“The set up for Leitrim has to reflect what is in Leitrim and the environment here and the background of the players. Hopefully, they will get something out of the workshop but it is not going to be a blueprint, far from it.”

And Paddy insisted that Leitrim could probably learn more from his own club Ballymun than looking at the Dubs - “The Ballymun stuff will be more applicable in that Dublin have a very strong set-up at county level and are financially very strong, very well set up organisationally.

“With Ballymun, there has been relatively great success over the years on meagre enough resources in disadvantaged areas so I suppose that will be something for people to pick up. Overall, it is a really positive sign that they are looking to pick up some coaching and feedback.”

And Paddy was quick to stress that concentrating on the skills is the only way forward for anyone wishing to play at a high level - “People automatically tell you they are getting these scores in the fitness tests, they are lifting these weights and all.

“But to be honest with you, what it still comes down an awful lot of the time is can you kick the ball over the bar? Can you catch the ball when you are running out for it if you are a corner-forward or a cornerback? Obviously if a cornerback is spilling the ball, it is in the back of the net so those are the things that really matter.

“People tend to focus on the small things because people are talking about inches in films and all that but really, that only applies when the top two or three teams in the country are playing each other.

“Most things resolve around the basics, putting the building blocks in place so if that you are a good catcher and a good kicker and you are reasonably fit, you’re going to be a decent player. No matter how much running you do or how much gym you do, if you can’t kick the ball over the bar, that is going to be a problem.

“Nobody knows that more than me having been involved over a number of years with Dublin as a player and a coach.

“No disrespect to anyone involved, we just didn’t have enough in the forwards to compete when we were playing the likes of Kerry and Tyrone, we couldn’t get enough scores on the board and it put us under huge pressure defensively. Having someone who can kick the ball over the bar is worth an awful lot.”

The idea behind the workshop is to ensure players can learn the skills while also enjoying the game - “Deliberate practice is something people would be familiar with over the years. They’ve probably read about or seen articles in papers where people attribute success at a high level to an awful amount of hours, labour intensive, non-enjoyable practice over and over again.

“Deliberate play is an evolution of that. When they looked at it, the 10,000 hour myth or ten years of intense work, that doesn’t really work because a lot of the activities are really deliberate play which is more to do with fellows kicking or playing World Cup on the side of a green or fellows going out on a pitch and kicking out a ball between two v two.

“That seems to be where high level success is coming from rather than going out and catching a thousand balls by yourself. Motivation wise that is very hard to do but deliberate play seems to be more in tune with what goes on in reality.

“There is the odd person in chess but unfortunately, you only read about the one person who makes it, the other 999 people who are very bitter because it wasn’t play and it wasn’t enjoyable and that is what this is about more than anything.”

And when it comes down to it, that is the message everyone involved in Leitrim football should take from Saturday.