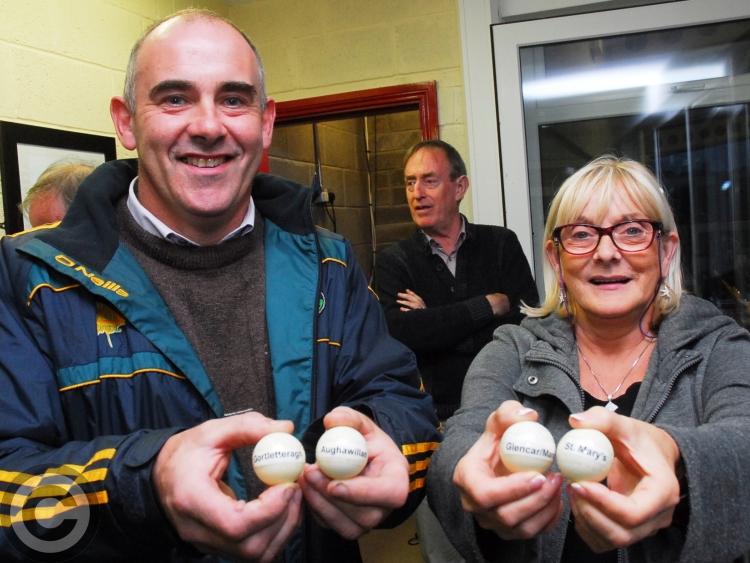 County Secretary Attracta O'Reilly will present a comprehensive report on the activities of Leitrim GAA over the past 12 months next Monday at the annual Convention.

Next Monday's Leitrim GAA County Board Convention in The Bush Hotel (7.30 start) will see the clubs of the county review the activities of the past 12 months. The full text of Attracta's report is as follows:

As 2016  is coming to its end I wish to make the following address with regard to the past year.

County Football Teams: Senior: FBD: We started off  with a 16 point win over GMIT, a three point loss to Galway, a five point win over Sligo which left us in second place in the table behind Galway.

National League: A league of mixed emotions where victories of five points over London and one point over Louth did nothing to ease the heartache of the one point losses to Wexford, Wicklow & Waterford, Antrim 10 points, Carlow five points, leaving us second bottom on table.

Connacht Championship: Expectations were high going into the game against Roscommon in Páirc Sean, however it was not to be. A defeat by 13 points sent us to the qualifiers once again,  where a favourable draw meant we welcomed Waterford to Páirc Sean. The lads came away with a four point victory so it was down the road to Sligo for our next outing where we were defeated by 11 points.

U21: A loss to Offaly (1-12 to 0-13), a draw with Longford (0-13 to 1-10) and a victory via Wicklow conceded their game which left us in a Shield semi- final v Roscommon, It was during  this game in Rathcline GAA grounds that our  game came to a standstill when Alan McTigue had to be airlifted to Galway regional after collapsing on the field of play. I would like to say a special word of thanks to all who was involved on the day from the professionals and otherwise from Leitrim, Roscommon and Longford, it has to be said that at the time everyone involved did everything possible to aid Alan in every way possible, from  CPR to calling ambulance and Air Corp etc. Thankfully Alan made a full recovery and is now fit and well.

Our game v Roscommon took place two weeks later ending with a great  win for us 1-9 to 1-7 which  put us through to the Shield final v Meath. This game went down to the wire with Meath winning by a last minute point to a score of 1-9 to 1-8. In the Connacht championship we lost out to the eventual All-Ireland winners Mayo on a score line of 4-12 to 0-15 in Páirc Sean.

Here I would like to Thank Shane Ward and all his backroom team for their work and dedication over the last two years with our Senior and U21 teams.

Juniors: Our Juniors were defeated by Galway 1-15 to 1-7 in Tuam Stadium on a Wednesday evening in May and were very unlucky not to win despite a huge effort.

Management: I would like to take this opportunity to wish our new management team of Brendan Guckian, Michael Moyles, John O’Mahony and Seamus Quinn the very best of luck in 2017 as they take on our Senior and U21 teams

Connacht League: In this Leitrim came out winners of the competition with a win over Sligo

Stephen Dorrigan Tournament: The Stephen Dorrigan tournament took place this year in Páirc Sean  again this year which was a very successful day in the County for Leitrim. Thanks to Thomas Keenan for organising this.

On the Club scene congratulations to Cluainin Iomáint on winning Senior county title since. Congratulations to Colm Moreton and Zac Moradi on their Lory Meagher Al Star awards. Thanks to Martin Cunniffe, Paddy Phelan and Paddy O’Connor for their continued work with our hurlers.

Medics: Special thanks to all medics who assisted our teams throughout the year.

Referees: Thanks to all our Referees who officiated our games throughout the year and also to those who were involved at National Level. Without these men putting themselves out there we would have no games. To Sean McCartin and the referees committee for their commitment throughout the year.

CCC: Thanks to Pat Mc Morrow and John Keenan and their CCC committee for their diligent work throughout the year in getting our games played within the calendar year and according to the planner set out at the start of year

Coiste na nÓg: Thanks to Gerry, Mary and the Coiste na nÓg committee for the completion of their calendar of games for the year. Coiste na nÓg has a huge volume of games to be administered and this takes a lot of organisation.

Underage Review: During the year an underage review was initiated to de-couple underage and adult football and to get meaningful football for all underage grades. Resulting from this  we now have competition, blitz and go games for U17, U15, U13,  U12, U11, U10 and U8. All clubs attended a meeting in the Bush Hotel, facilitated by John Tobin and John O’Mahony,  from  the views and observations of the personnel from the clubs ,there is now a calendar of competitions produced. A special word of thanks to the Committee involved and to Thomas Keenan and Hugh Clinton for their numerous hours of work and input into this. Hopefully in 2017 we will see this coming to fruition and having the desired effects on our youngsters.

Winners and Runners Up: Congratulations to all our county title winners from U12 right up to Senior in Leagues and Championship, and commiseration to the teams who lost out on final day.

GPO: I would like to wish James Glancy best of luck as he took on the role of our new Games Promotion Officer, James who was appointed during the year and is working with the schools, clubs and coaches at various levels.

Award Winners: Congratulations to all our award winners for 2016.

Clubs: Thanks to all personnel in the clubs for their support and co-operation during the year, without this our games would never take place.

Stewards: In May we held a stewards training course and had over forty in attendance, I thank all those who attended and has officiated at our games in Páirc Sean during the year.

Páirc Sean Mac Diarmada: During the year we had the occasion at short notice to host a national league game between Roscommon and Dublin as  the Hyde became unplayable due to weather. It became apparent from that game that Páirc Sean and all  personnel involved are capable of upholding the highest of standards. A special thanks to all who helped out from the early hours of the morning and throughout  the day and to St. Mary’s for the use of their facilities on the day.

We have since hosted the Connacht Intermediate and Senior Club finals and I want to thank all the personnel and stewards for their work and help at both events. Thanks once again to  St. Mary’s for the use of their facilities on each day.

A special word of appreciation to the Páirc Sean committee for their continued work and commitment to the excellent maintenance  of Páirc Sean. This also includes our FÁS scheme workers in Páirc Sean both in the office and outdoors.

Thanks also to Paula Kiernan and the Kiltubrid Pipe Band for their participation at our games in Páirc Sean.

Programmes: To our PRO, Declan, a word of thanks for your work on our match day programmes, especially for the Senior final in which there was a huge amount of work involved. Declan’s live score updates on Twitter and Facebook have also enabled Leitrim supporters around the world, especially in Idaho and Perth to keep up to date with action  in our club and county games throughout the year (and spared me this task during the games).

Open Evening: A very successful open evening was held in Páirc Sean with our Senior panel.  Thanks to our PRO Declan and everyone involved.

Scór:  Thanks to Claire for her work with the Scór and congratulations to all who took part in  all our Scór competitions, to the winners in Leitrim and Connacht. A special effort was  made this year to encourage more participants and thanks to this the uptake was evident. Special word to St. Mary’s for their record this year in having the most items in an All Ireland Scór from one club with Laura Crossan taking part in all four items, unfortunately they did not have any success in the finals in Killarney.

Supporters Club: Thanks to Mike Feeney of the Dublin Supporters , John Mulvey and   Shay Reynolds of the Leitrim committee, and to all the clubs for their endeavour to continue to sell the Leitrim Supporters club tickets. This is a very important fund raiser for the county.

Finance: Finances will always be a major stumbling block for our County. Fundraising for much needed funds is very important, I thank Brian Gordon for his work and I wish him well in his retirement.

Development:  The Centre of Excellence in Annaduff  opened  its doors and fields to training in January 2016. It is a huge boost for  our County teams to have this  training facility and many thanks to Brian Blake who took charge of it for the year and will continue to do so in his new role.

Sponsorship:  Huge thanks to The Bush Hotel for their continued sponsorship of our County Team, John Mac Manus, Connacht Gold Aurivo for our Senior Club, Fox Monumentals for our Intermediate club and Pyramid Bookmakers for our Junior club competitions Paul Maye Dunnes Bar for our Leagues, Carmel McCartin and all  other sponsors who sponsored throughout the year.

Bereavements: To anyone who suffered losses and bereavements during the year, sincere condolences.

Committees:  The affairs of the county are run by a lot of personnel ranging from the committees to the clubs to the people on the ground.

I wish to acknowledge all the support and assistance afforded to me this  year from various personnel in Croke Park (too many to individually mention)  and John Prenty and staff in Connacht Council.

If I have omitted anyone or anything I apologise – these end of year recaps are tougher to pull together than you would think.

Many thanks to my family for your  help and support.

Finally I wish each and every one a very happy Christmas and Good Luck for 2017.