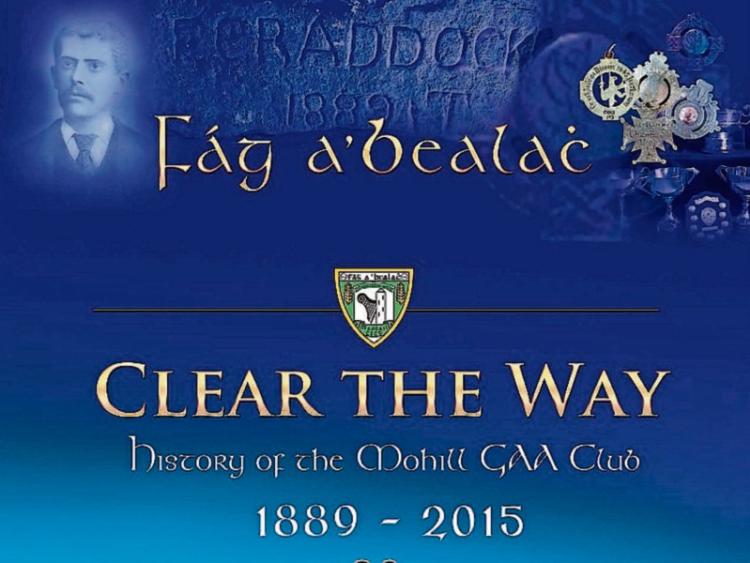 On the afternoon of the January 13, 1889 a group of idealistic and visionary young men sat around a table in the 'Reading Rooms' in Glebe Street in Mohill.

The reason they were there was to form a football club under the aegis of the GAA, which had been founded five years earlier in Hayes Hotel in Thurles, and whose influence was only then beginning to be felt as far north as Leitrim.

They chose as the name of the new football club an ancient Gaelic battle cry – Faugh -a' -Ballagh, Clear the Way. Little did they realise that not alone had they founded a GAA club but they had also decided the title of the book which would chronicle its history from its foundation in 1889 up until 2015.

The seeds of this story were sown in 1989, the 100th anniversary, when a number of club members mooted the idea of honouring those great club men and women who had kept the flame of the GAA burning in the parish, often through difficult and challenging times.

One of the prime movers in this enterprise was Kerryman Tom Lynch, who along with his wife Maureen and Brian Gordon researched the early years of the club, up until 1940. However, for various reasons the effort petered out, but there was always a feeling of unfinished business. The delay was fortuitous in one way because the achievements of the club since 1989 has been nothing short of remarkable, especially at underage level.

On March 21. 2014, 25 years since the first steps were taken to tell the Mohill GAA story and 125 years after the foundation of the club a group of club members met, not in Reading Rooms in Glebe Street but in the clubroom in Hyde Street.

This time there was a renewed determination to finish the job, and a team of 10 researchers committed to finally put on paper a record of the club's achievements over the previous century and a quarter. The aim, naively as it turned out, was to have the history completed by the end of 2015. Nobody appreciated the degree of difficulty and the amount of sheer hard work involved.

Next Saturday, December 10, at 8.30 pm in The Baronial Hall of Lough Rynn Castle will see the culmination of two years of hard graft by a lot of people when Aogán O Fearghail officially launches the Mohill GAA story, titled ‘Clear The Way’.

Anyone with an interest in the history of the club, not just from Mohill but from the wider GAA community is invited, and the book will be on sale on the night (price €20).

Maureen Lynch and Des Keegan are joint editors and ‘Clear the Way’ is more than just a history of games played and cups won and lost. It is a tribute to the many people who left their particular stamp on a local folklore which distinguishes every club.

It includes a biography of Pakie McGarty, the greatest player to wear the club and county jersey, as well as a tribute to the late great Philly McGuinness.

Even the Park, re-named in honour of Philly, that one-time soggy boggy field on the Dromod Road, has its own story. Also getting a profile is Matt Gaffey who has been training Mohill teams for over 40 years.

There are many other articles of interest, written in a style that is easy on the eye, sometimes humorous, sometimes serious but always interesting. And sometimes the levels of credulity are stretched to breaking point by tall tales, inevitable when Des Keegan and Tom Lynch are wielding the pen or manning the word processor!

All in all a brilliant read and if Tom Lynch were around, he would indeed be a happy and proud man to see completed what he had started.