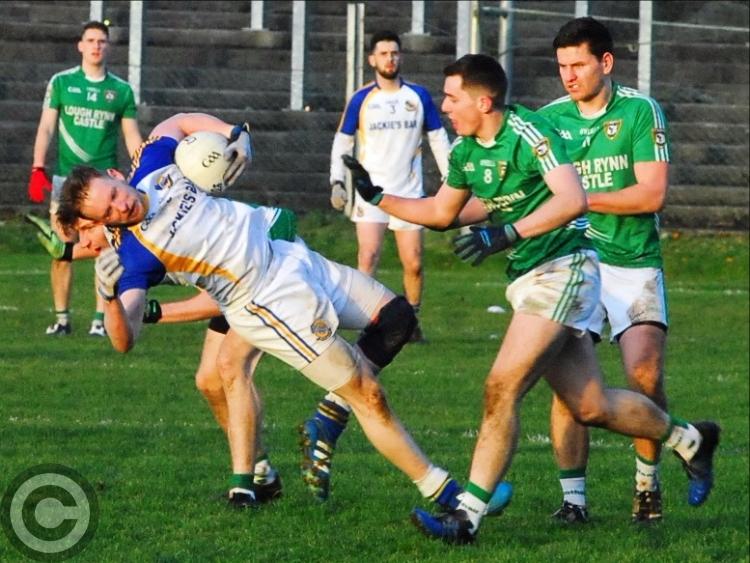 Aughawillan's Sean Flanagan goes down after a heavy challenge from a partially hidden Shane Quinn. Photo by Willie Donnellan

You could tell from the celebrations that this was no mere League title for Mohill. No, it was redemption as they retained their League title and laid down a marker for 2017.

Aughawillan had ended Mohill reign as County Champions, a one point win in the quarter-finals starting the Willies off on a fantastic journey to the Fenagh Cup. But there was a large measure of revenge here as Mohill retained their League title and sent out a message.

No more than that quarter-final, there was nothing between the teams on the scoreboard as an underwhelming Aughawillan battled like men possessed but Mohill were well worth their victory.

Alan Armstrong produced a marvellous display at full-back that led his team but Mohill had many fine displays from Ronan Gallagher, Caillin Canning, Fiachra McGuinness & Danny Beck and they would have had only themselves to blame had they lost this game with some costly, costly wides.

Aughawillan were strangely subdued and clearly not at their best but they are never beaten and despite not firing anywhere near their best, they almost completed a remarkable League & Championship, their resolve and pride almost an elemental force of nature.

Aughawillan tried to replicate their trademark fast start but Stephen Gilheany dragged his shot inches wide after two minutes before his brother Ciaran converted a free. But Mohill were quickly into their stride with Keith Beirne hitting two points before Ronan Kennedy added a nice score. Stephen Gilheany narrowed the gap with a fine point on nine minutes.

But Mohill were dominating a Fiachra McGuinness set Ronan Kennedy free but his shot flew high over the bar with a goal on. However, Mohill didn’t have long to wait for a goal as, 11 minutes in,  McGuinness turned the game as he slipped a low ball to the Aughawillan net.

Domhnaill Flynn extended the lead 13 minutes from the halftime break from Sean Quinn was yellow carded for a heavy hit on Ronan Gallagher.

Mohill kept the scoreboard ticking over with a Ronan Kennedy point but Aughawillan steadied themselves when a good run from Sean Flanagan saw him set up Ciaran Gilheany for his second point.

Both teams missed chances as Mohill led 1-6 to 0-3 at the break, a lead extended by a brilliant Keith Beirne point two minutes into the second half.

Aughawillan were starting to build up a head of steam as Sean Flanagan saw a shot saved by Padraig Tighe but Mohill were missing good chances as well, Fiachra McGuinness saw a good chance blocked as he hesitated in front of goal.

Mohill started to miss frees and the game took a bizarre turn when Sean Quinn received a second yellow card clearly meant for his brother Micheal. Confusion reigned and the right brother was eventually  booked.

Mohill were rocked but McGuinness worked the ball for Ronan Gallagher to score a huge point in the perfect response. Then Padraig Tighe made a wonderful save to deny Niall Beirne a certain goal with Ciaran Gilheany’s diving fisted follow-up going inches wide.

Morgan Quinn scored a huge effort to reduce the gap to three points with 11 minutes to go and great work from Barry Prior led to a good score from Gary Plunkett a minute later.

Mohill fought back but saw Beirne missed three opportunities to extend the lead with Flynn scoring a huge effort four minutes from time.

Mohill looked to have held out despite Alan Armstrong conceding a controversial 50 when he was clearly fouled and they suffered another blow when Ronan Gallagher was  black carded for hauling down an Aughawillan attacker.

From that free,  Michael Quinn lobbed a high ball into the goalmouth, Niall Beirne  dramatically driving the ball to the net over two minutes into added time to send the contest to extra-time.

Everyone felt Aughawillan would take control, particularly with the loss of  Gallagher, but it was Ronan Kennedy who put Mohill in front with a lovely point on the run. But Aughawillan's  legendary  spirit seemed to have risen up when Gary Plunkett spun his way through the Mohill defence and planted the ball in the back of the  net.

But it was Mohill who drove on - McGuinness pointed two minutes later and a foul on Keith Keegan allowed  Beirne put over a free to tie the scores going into the second period of added time.

Stalemate was short-lived as Ronan Kennedy scored a free just a minute into the second half  but Beirne & Kennedy  missed good chances before Kennedy  blasted a shot off the woodwork when it looked certain he would at least point and maybe even goal.

Aughawillan couldn’t work the goal chance they so desperately needed and the final whistle sparked off wild  Mohill celebrations.

Main Man: Ronan Gallagher, Danny Beck, Domhnaill Flynn and Padraig Tighe all played key roles for Mohill while Barry Prior, Noel Plunkett & Sean Flanagan stood out for Aughawillan but the best player on the pitch, head and shoulders above all else, was Mohill full-back Alan Armstrong with a fantastic display, particularly when his team were under pressure at the end.

Talking Point: In their quieter moments, Mohill will look back on their championship defeat to Mohill and wonder what might have been. This was a big statement from the League champions and sets them up well for 2017.

Turning Point: Gary Plunkett's goal looked as if it would push Aughawillan to victory, instead it was Mohill who reacted best and pushed on again for victory.

Ref  Watch: Seamus Mulhern let a lot go to keep the game flowing but there was one decision, a foul on Alan Armstrong in the dying minutes, that should have been penalised.

Highlight: Aughawillan's refusal to give in, as always, is  a highlight but Mohill's resilience and refusal to buckle as just as impressive, a great game considering the time of year.

Lowlight: Some of the finishing, particularly from Mohill, could and should have cost them on another day. Aughawillan's lacklustre opening 45 minutes was strange considering they were going for the double.