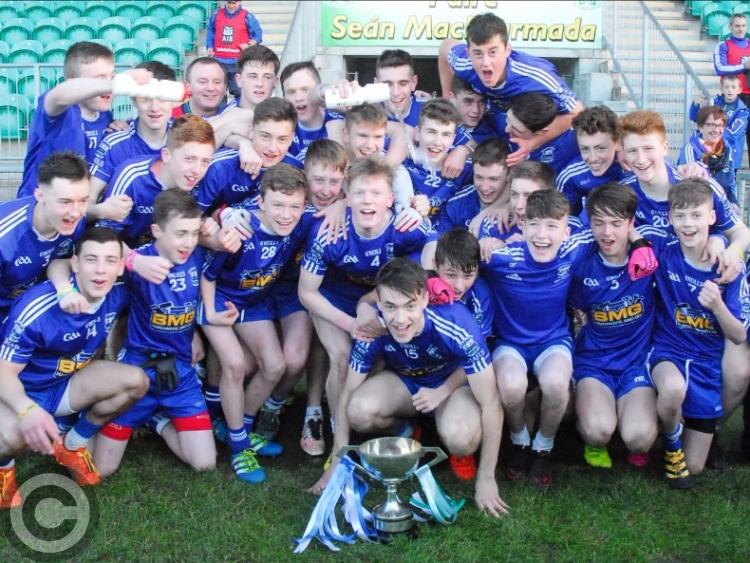 Melvin Gaels celebrate winning their first ever Minor A Championship title - Darragh Rooney is ranked by Colin Regan as one to watch for the future. Photo by Willie Donnellan

Welcome to part one of our Sports Review of the Year where we look back on 2016 through the musing of Shannonside radio’s John Lynch and former Leitrim star and columnist Colin Regan.

Moment of the year

The standout occasion for me over the past year would have been the staging of the Leitrim Club Finals in October. It was wonderful decision to stage all three finals (Minor, Intermediate and Senior) on the one day in Pairc Sean. The quality of the football, the excitement of the three matches, the massive attendance and drama that the day produced were all contributing factors to a very enjoyable day.

I am going to go for rugby and Connacht success in winning the PRO 12. Over the years, Connacht Rugby has always been the poor relation in this country, however the journey Pat Lam’s charges embarked on in 2016 was the stuff of legends.  It’s hard to believe that not once but twice the Provence almost ceased to exist as a rugby identity so proof if ever needed that every underdog can have their day.

Sports person of the year

For the year that is in it I am going local. Over the past few years I have had the pleasure of being involved with the Leitrim Sports Stars Awards and this year’s sports Person of the year winner Breege Connolly, I felt was a worthy winner and she’s also my selection here as well. The Olympics as far as Ireland were concerned were an embarrassment with the events of missing tickets dominating the agenda. However when you dig deep enough and discover the real stories and get a snapshot into the lives of the real heroes then it restores your faith in sport again.  The commitment and dedication she showed so that she could have performed to the best that she could was what the Olympics is all about.

Team/ club of the year

On a local level once again Aughawillan showed that they have to be considered for this award. Tommy McCormack is a manager that I have huge admiration for. Their start to the County final against Glencar/Manorhamilton was electric but when the chips were down and the game was in the balance they dug in and won the title. That final display in many ways sums up what is good about the club and what makes them different from other sides, they are never beaten.

Match of the Year

The All Ireland Senior Football Semi Final between Kerry & Dublin was a cracking match that had everything. It was the match we all had secretly hoped would happen all year and it produced a stand out highlight in an otherwise dull championship. I have to admit that I love watching the Dubs live. To me they are simply the best team that I have ever seen, the game has changed too much in order to draw any comparisons between them and the great Kerry team of the 70s and 80s. Credit as well to Kerry they played their part in a memorable occasion.

Disappointment/ Lowlight of the year

The All Ireland  qualifiers, again, from a Leitrim perspective this has been a competition that has not served the County well. In 2016 Leitrim recorded only their second win against Waterford and it was perhaps expected that a local draw against Sligo in the next round was a winnable game. It sadly did not turn out to be the case and on that particular Saturday evening, we were treated to a terrible match. It lacked atmosphere and occasion and it was a game that Leitrim never got going in. There have been painful defeats for Leitrim in the past and I have been behind a mic for most of them. This one ranked right up there for the simple reason that I felt Sligo were  there for the taking.

Looking forward to most in 2017

Jose leading Man Utd back to the top of the pile in the Premiership. Might not be 2017 though! I am optimistic about the 2017 Allianz NFL. With the new Leitrim management team at the helm, there will be interest in how the County senior side perform. It’s a tough division and the draw has not been terribly kind but I am glad to see that it’s been touted as a target. For the 2017 championship, the new Ruislip will be marked in the diary for the summer ahead. And perhaps a Connacht semi-Final with Roscommon? Now that’s always interesting!

Always dangerous to build up any sports people in advance. Two Gaelic footballers to watch out for in my view will be Darragh Rooney of Melvin Gaels and Pierce Dolan of Aughawillan. Both players enjoyed a superb year in 2016 and the 12 months ahead could well be fruitful.

In a year when scandal and cheats continued to diminish the ideals of the Olympic Games and darken the colours of the five rings, seeing Breege Connolly – a runner from our own parish – cross the finish line of the female marathon reminded me of what the Games are all about again.

The O’Donovan brothers from Cork take this gong for bringing a bit of fun back to sport at the highest level, showing that to be the best in the world one doesn’t have to be intense and tormented; or more afraid of losing than of enjoying the joy of competition and winning.

I have to give this one to the Irish Rugby team for their phenomenal performances in the Autumn series, particularly in ending the 111-year undefeated run held over them by the All Blacks. Lots of lessons to be learned by any team who believes another holds a jinx over them.

Best Occasion/ Event/Match of the Year

I missed watching the All Blacks match, so the best live occasion I witnessed was the drawn All Ireland final between Dublin and Mayo. The bizarre nature of the first half coupled with the second half drama, thick with the hopes and fears of the Mayo fans, had me on the edge of my seat – and out of it for the last ten minutes. The Waterford Kilkenny draw and replay games were equally epic, even via the medium of television.

Disappointment/ Lowlight of the Year

Leitrim’s qualifier match against Sligo was the most painful performance I have endured in my time as a spectator by our county side. I know the effort the lads had put in against challenging odds and obstacles but they failed to translate any passion or belief into this dreadful performance. It hurt.

I’m excited to see what the new Leitrim management team can bring to the county set-up. I’m looking forward to their efforts being completely integrated into the work of the coaching structures of the county with new impetus, planning, design, and experience brought to these structures by James Glancy.

The first few times I watched – and played with – Darragh Rooney I said he had the potential to be the best player Melvin Gaels has ever produced. That’s not to put an undue pressure on Darragh, who is mature beyond his years anyway. Having been called up to the Leitrim senior squad I hope he is carefully minded and given every opportunity to enjoy his fresher-year football in DCU without any risk of overtraining or burn-out. His talent is limited only by his own ambitions.