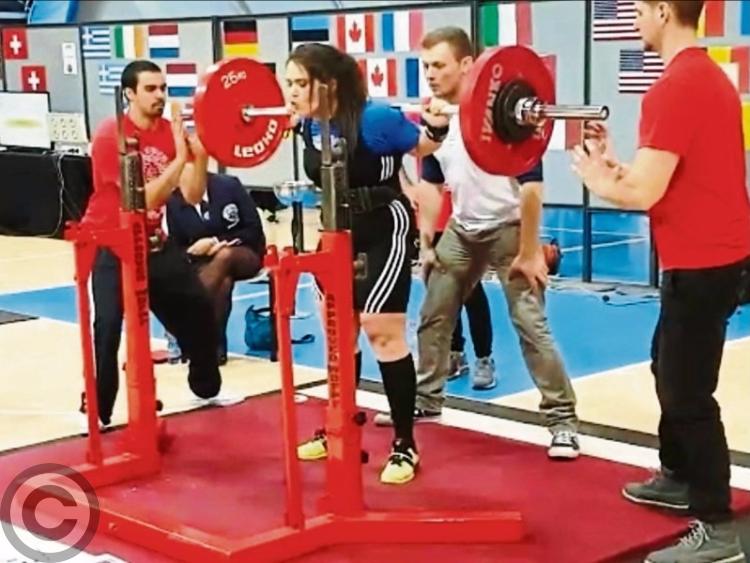 Aoibheann Boyle on her way to winning the World title

It is almost a sporting Cinderella story -less than two years after taking up the sport of powerlifting, Ballinamore's Aoibheann Boyle is that rarest of Leitrim athlete - a World Champion!

Winner of the Special Achievement Award at this year's Leitrim Sports Star Awards, Aoibheann’s journey from first going to the gym, having been persuaded to do so by her brother James, culminated in her success at the World Championships in Italy almost two years to the day from her first trip to the Sean O’Heslin’s gym.

Recalling her first ‘lift’ Aoibheann noted “That was two years ago on November 7. I lifted in Italy on November 12, so I suppose it was special that it was the two year anniversary. It’s not like me to be so dedicated to something, it just clicked with me and I love it.”

The dedication that she has shown to her sport suggests that she took to powerlifting like a duck to water but it wasn’t quite that straightforward.

“No, I didn’t actually, not in the first few weeks. I was doing it really for something to do because I had just dropped out of college and then as the months were going and I was sticking to my plan, I could see the improvements in the numbers I was lifting and the numbers on the scales as well.

“That really spurred me on and everyone around me gave me the self-belief that I didn’t have in the year before. It gave me the confidence that I could compete.”

With her new found confidence Aoibheann competed for the first time last May in the IDFPA Full Power Powerlifting Championships in Dublin and claimed first place in her category and her first experience of competing proved to be a special one as she overcame her nerves to claim first place.

“I competed for the first time on May 5, a year and a half exactly from when I first started in the gym. I was a ball of nerves but I got over it. I got over the first squat and that went well and it gave me the confidence.”

In fact Aoibheann did better than simply ‘getting over the first squat. She squatted 125kg which at the time was a Junior World record. Although her record was subsequently beaten, she remained confident she would be able to increase that number in the future.

Her success in Dublin cleared the way for her to compete in the world championships in Riva Del Garda, Italy in November but as she pointed out, her success is no accident, it is the result of a lot of hard work and many hours in the gym.

“The average week would be Monday, Tuesday, Wednesday, Friday, Saturday. I’m off on Thursday and Sunday. For the power lifting, I do a 13 week training camp up until the competition. It is fairly intense, every week the numbers go up but I enjoy it.”

Looking back on the trip to Italy Aoibheann beamed with pride as she recalled a memorable few days.

“I had a great few days over in Italy. We flew out on Thursday and I was lifting on Saturday so I had a good break to get a good bit of rest and get some food in and prepare me for Saturday. Saturday went very well, I had a slight injury in my leg at the start so I thought things were going to go fairly bad but they didn’t and I got through them. My squat, I got the world record in it.”

The powerlifting event consisted of squat lifts, dead lifts and bench lifts and Aoibheann was thrilled with how the event unfolded as she also regained her squat record.

“I was, I didn’t know how much I’d beat it by but I got the 140kg that I wanted and that really gave me confidence to go through the bench lift and the deadlift, it got rid of the nerves. The bench went really well, I got the same as I lifted in my last competition. I find it hard to improve the bench but then in the deadlift I lifted 10kg above what I lifted last May so I was very happy with that lift. It was something I never did before.”

Aoibheann was accompanied in Italy by Spike McCormack, a man who knows all about claiming world titles, and his girlfriend, something that was a great help. But it is her brother James who she reserved a special word of praise for.

“If it wasn’t for James I wouldn’t be doing what I am doing. I’m studying sports science in Athlone and I love it. He’s played a big role in the journey.”

Having had a year to remember it was understandable when she was asked what she has planned for 2017 that Aoibheann would reply “The same again! I’ll try and do as good as I can next year and increase my numbers. There are worlds again next year so hopefully I qualify for those and see where that takes me.”

Aoibheann’s story is one that has struck a chord with many and while she does acknowledge it could be a source of inspiration for others, for now she is still trying to fully appreciate what she has achieved.

“I suppose it does register with me but I love it so much that I don’t really take the time to look back at the enormity of it. Years and years ago if you told me I would be where I am know I would have laughed.

“I love it so much that I don’t really take the time to look back at the enormity of it. Years ago, if you had told me I would be where I am today I would have laughed. I was sporty enough when I was younger but then I went to secondary school and that dwindled and I wouldn’t have thought I would be picking up a sports award.”