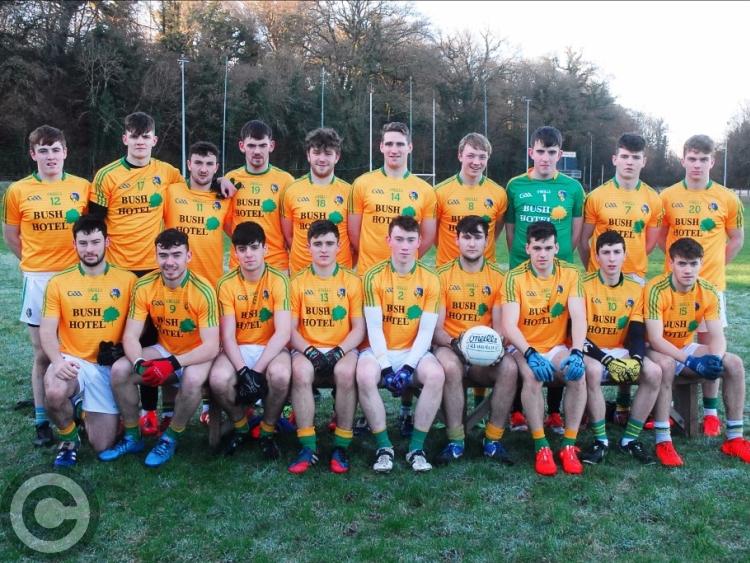 The Leitrim team who defeated Wicklow in the U21 Hastings Cup. Photo by Willie Donnellan

Three goals in five devastating minutes saw Leitrim turn a tight Hastings Cup tie into a cakewalk as the County U21s got 2017 off to a positive start.

Just two days after defeating Roscommon in a challenge, Leitrim disposed of Wicklow's challenge despite starting without the services of Pearse Dolan, Ryan O'Rourke, Niall McGovern while Mark Plunkett only came on for the last five minutes.

Leitrim put the game to bed with three goals in a five minute spell but they could and probably should have had more only for a couple of great blocks and saves to deny them in the first half.

The intensity dropped in the second half, understandable after the exertions against Roscommon two days previously but it was certainly a good start to the year for a team clearly aiming for a tilt at the final Connacht U21 Championship ever.

Galway and Mayo stand in Leitrim's way but with such a powerful forward line, Leitrim can genuinely plan for a tilt at this year's title but it will be done the hard way - something Leitrim did back in 1991 when they last won the Connacht title.

Eight of this U21 squad are members of the Leitrim Senior squad which means they may not see action in the FBD League in the coming weeks as they concentrate on the Hastings Cup campaign.

Keith Beirne opened the scoring with a 40 yard free for Leitrim on 50 seconds, quickly followed by a Jack Heslin point on the run for the home team. Leitrim were dominating but missed some good chances.

Wicklow’s first real attack saw Jack Bellamy played a nice one-two down the wing before swinging over a lovely point on six minutes. Cathal McHugh had a bad wide for the Garden County men with a team-mate free in front of goal but Mikey O’Connor converted a free to tie the scores on nine minutes.

Leitrim should have goaled but a great block from Sean Gilligan saw him block Jack Heslin’s goalbound shot out for a fifty that was deflected wide but Leitrim regained the lead when Dean McGovern burst through the middle to fire over a good point on 12 minutes.

Wicklow hit back with another O’Connor free after a foul on Conor Ryan, the ball hitting the post on its way over but that was as good as it got for Wicklow as Jack Heslin forced a brilliant save from Tom McGurk.

Points from Heslin, Beirne and McGovern gave Leitrim a three point advantage but the lead was exploded in a five minute spell, started when Leitrim pounced on a poor Wicklow kickout, working the ball into Keith Beirne who finished clinically for the game’s first goal.

Gary Allen responded with a huge score from distance but when Wicklow keeper McGurk spilled a high shot, Leitrim wing-back Oisin Madden pounced to force the ball home from close range on 24 minutes.

Conor Gaffney added a point before his poor shot was brilliantly fisted to the net by Darragh Rooney from close range and despite a late O’Connor free, Leitrim led 3-7 to 0-5 at the halftime break.

Wicklow came out with more intent after the break and Gary Allen put over a free after less than a minute before a cross from the lively Mikey O’Connor saw Allen bring off a good catch before his low precise finish found the corner of the net.

Conor Gaffney steadied the Leitrim shop with a lovely point after a good move but Cathal McHugh cancelled it out with a fine point on nine minutes.

But any hope of a Wicklow fightback was ended with three Keith Beirne points, two from frees, in a four minute spell and although Wicklow hit back with points from Allen and Martin Shanahan, the game was winding down to its inevitable conclusion.

Beirne put over another free, Mark Plunkett scored a brilliant point from the left hand corner and Allen finished off Wicklow’s scoring with a free before sub Peter Reynolds put over the last score of the game in added time.

Leitrim face Meath, who lost to Offaly on Monday, in the next round on Saturday and victory would set them up nicely for their final game against the Midlanders.

Main Man: Keith Beirne was effective from frees while Dean McGovern and Keith Keegan dominated midfield and gave the forwards a liberal supply of possession. Luke Murphy, Jack Heslin, Conor Gaffney, Oisin Madden and David Bruen all impressed with their workrate and effort.

Talking Point: Leitrim have an incredibly tough draw in the Provincial championship with both Galway and Mayo baring their path to glory. But there is  a wealth of talent, particularly in the forwards, in this team so there is quiet sense of optimism among fans.

Turning Point: Keith Beirne's goal came from a poor Longford kickout and it put Leitrim firmly in command, two goals shortly after effectively ending the game as a contest.

Ref Watch: Solid enough showing for Longford official Aidan Dowler, let a lot go, particularly over-carrying but didn't have a lot to do.

Highlight: Mark Plunkett was barely on the field for five minutes but a spectacular point from the wing really stood out.

Lowlight: Hard to find any particular lowlight, perhaps the lessening of intensity in the second half probably the only disappointing feature for the Leitrim management.