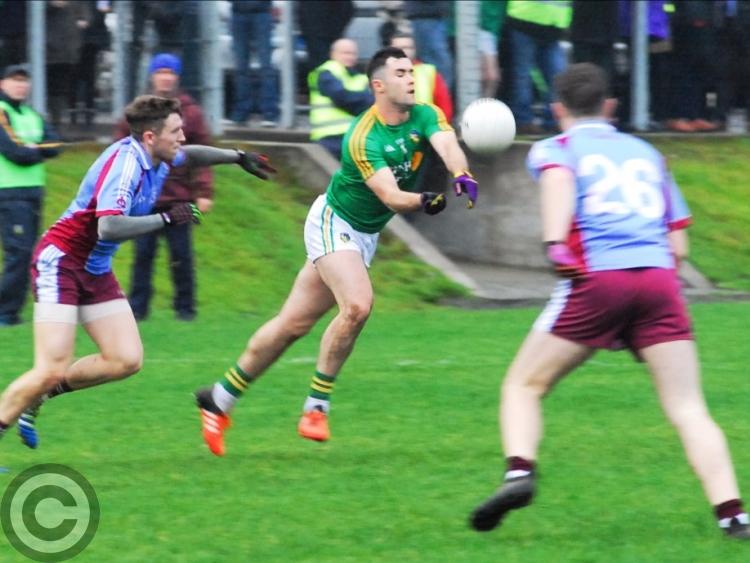 Nevin O'Donnellan off-loads the ball against GMIT in Mohill. Photo by Willie Donnellan

Brendan Guckian's tenure as Leitrim manager got off to a comfortable start as Leitrim strolled to victory over a very disappointing Galway Mayo IT last Sunday.

Philly McGuinness Park hosted an expectant crowd out to see a new look Senior team but there was little to be learned such was the paucity of the opposition Leitrim faced in the opening round of the FBD Insurance Connacht League.

The 19 point victory puts Leitrim at the top of group table but nobody, least of all  Leitrim management or players, needs to be told that much sterner and, to be brutally honest, more worthwhile challenges await in the coming weeks.

There wasn't a lot that could truly be learned against the College team as Leitrim feasted on a team who gave the Green & Gold forwards acres of room and while Leitrim can only beat what is in front of them, the game didn't do much for Leitrim apart from collecting two valuable points.

Galway next Sunday will be much tougher with the winner going a long way to booking a place in the FBD League Final so it will give Guckian and his team a better picture of where they are at the moment.

Leitrim obviously meant business early on and despite two narrow misses, they took the lead when good work from Brendan Gallagher found a big hole in the GMIT defence and an off-load to Emlyn Mulligan resulted in an expected clinical finish low to the left corner on three minutes.

With Leitrim missing a couple of chances, Damian Brennan put over two frees to narrow the gap but Nevin O’Donnell drilled the ball over the bar with a goal chance on the cards after Damian Moran fielded a quick free.

Leitrim’s response was impressive - Mulligan tapped over a free as debutante Fionn Carney was withdrawn, Keith Beirne coming on and another new boy, Conor Gallagher, dropping back to wing-back.

Emlyn Mulligan was again the provider for a second Leitrim goal on 19 minutes when his free, moved forward mystifyingly, saw him find an unmarked Damian Moran in front of the goal and the Bornacoola man made no mistake with a clinical finish.

James Rooney then raided twice upfield to point, one set up by Brendan Gallagher who got in on the second act himself with a well worked point.

A third Leitrim goal wasn’t long in arriving when more terrible defensive work in the GMIT rearguard was exploited with a long ball to Keith Beirne. His shot was saved when it should have been buried but Nevin O’Donnell rammed home the rebound.

Beirne & Donohue swapped points before the most bizarre score in some time when the ball bounced off Shane Moran as he tried to go through. With nobody near the keeper, Conor Nolan attempted to gather but let it slip through his grasp and in attempting to turn and grab the ball, the keeper inadvertently kicked the ball into his own net!

Emlyn Mulligan added a point that could have been a goal had he spotted an unmarked teammate charging through the middle but the point left Leitrim with a 4-8 to 1-4 point at the halftime break.

GMIT swept over two points from Joseph and Christopher Donnellan either side of a fisted Brendan Gallagher effort but the game was over six minutes into the second half when Caillin Canning did extremely well to gather the ball despite a big hit, he got up and turned sharply to fire low to the corner.

Damien Moran and Ronan Gallagher added points with Joseph Donnellan firing over a free but it was Leitrim who continued to increase the lead with two Nevin O’Donnell points, one from a free.

Maybe it was GMIT finding a bit of form, maybe it was Leitrim dropping their intensity or a combination of both but the College team found a vein of scores as they saw Joseph Donnellan put over two frees and Liam Creaton added a free before Emlyn Mulligan scored an easy point.

The visitors got some little reward when a good move opened up the Leitrim defence, somewhat worryingly with no apparent effort, and Jack Reilly fired past Philip Farrelly for a consolation goal with nine minutes left.

Leitrim weren’t, however, about to let up and they held GMIT scoreless for the remainder of the game while adding six points - Gary Plunkett got his first point on the turn, Brendan Gallagher scored a lovely point while Mulligan tapped over a point.

Keith Beirne added two quick fire points and after playing at wing-forward, wing-back and corner-back, Conor Gallagher marked his debut with an injury time point to complete a comfortable victory.

Talking Point: With IT Sligo suffering a similar beating, you'd have to wonder the point of the colleges competing against Inter-county teams, not withstanding NUIG's win over a third string Mayo. Maybe it is time to re-examine the involvement of the college sides in the FBD League.

Turning Point: Damian Moran's goal put Leitrim in complete control after GMIT somehow got themselves in front two minutes earlier with a goal against the run of play.

Ref Watch: Roscommon referee Brendan Healy didn't have a lot to do, may have been a bit harsh on GMIT in the first half though.

Highlight: Five goals is a huge return for a normally goal shy Leitrim and the movement of the forwards was very impressive.

Lowlight: Leitrim won't have learned a lot from this game given the paucity of the GMIT challenge.