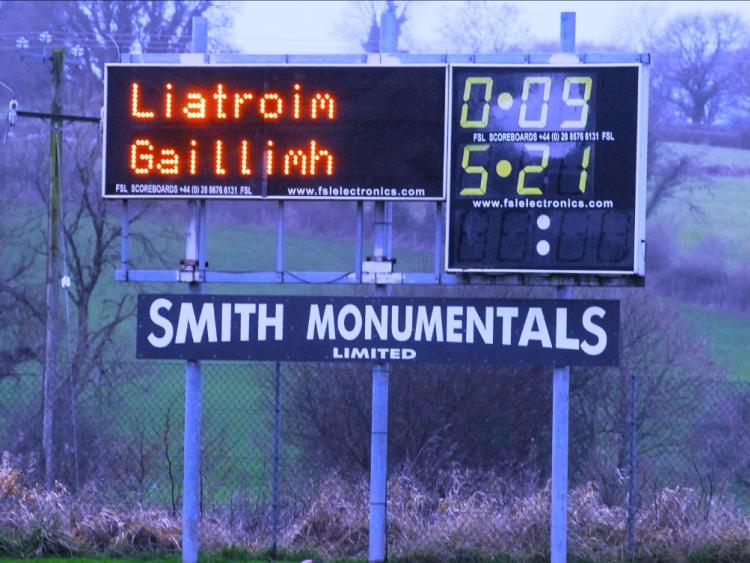 Not a pretty sight! The scoreboard at the end of last Sunday's FBD Insurance Connacht Leauge clash in Ballinamore. Photo by Willie Donnellan

Just a week after a big win in the first round of the FBD Insurance Connacht League, Leitrim were brought back down to earth with an unmerciful bump as Galway ran riot in Pairc Sheain Ui Eslin Ballinamore last Sunday.

Three goals inside the first three minutes, the first after just 20 seconds, punctured the hopes of expectant Leitrim fans and left Brendan Guckian’s team with a mountain to climb and almost certainly ended Leitrim’s hopes in the Provincial League.

Galway played with an authority and sharpness that illustrated the gulf in class between the teams as Leitrim were left completely outclassed by Kevin Walsh’s team who were denied two more goals in the first ten minutes of action.

With Leitrim all at sea, Galway simply fired over point after point, scoring eight in the first quarter as they led by a match winning 3-14 to 0-4 at the halftime interval.

The second half saw the game played in a surreal atmosphere with Galway, still dominating but well below top pace, adding 1-4 before Leitrim opened their second half account with a Damien Moran point.

There was still time for returned Galway veteran Sean Armstrong to fire home a fifth Galway goal as many of the crowd had left long before the final whistle.

It was a devastating end to the weekend for Leitrim who also saw U21 star Darragh Rooney suffered a devastating suspected broken collarbone in the Hastings Cup victory over Offaly in the Leitrim GAA Centre of Excellence.

The 2-14 to 2-8 victory over the midlanders was enough to book Leitrim’s place in the competition’s semi-final next Friday evening but they could be without the young Melvin Gaels star for this year’s championship campaign after his injury.

Leitrim will take on Longford in the Hastings Cup Semi-Final next Friday evening in Clonguish (8pm throw-in) while Leitrim will face Sligo in their final FBD League group game in Tourlestrane next Sunday (2pm throw-in).