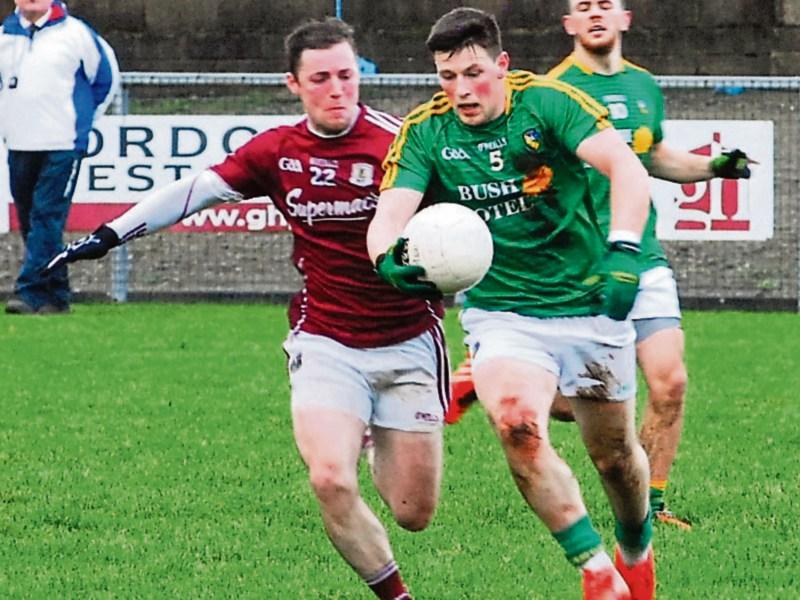 Cautious optimism after the win over GMIT turned to ashen faces last Sunday in Ballinamore as Galway tore a woefully out of touch Leitrim to pieces.

It was the horror show of horror shows as Galway utterly bossed this game with Leitrim’s pre-season optimism disappearing in relentless waves of Tribesmen scores, leaving Leitrim fans shattered long before the welcome final whistle.

Leitrim were simply not at the races as a physically imposing yet incredibly mobile Galway completely dominated possession in the middle of the field, completely snuffed out the Leitrim attack and completely ripped the defence to shreds.

Galway’s movement, their pace, passing, their physical strength means the reigning Connacht Champions are simply on a different planet to Leitrim at the moment and the gulf may only get wider with the return of the Corofin contingent and Damien Comer.

Leitrim were missing some players but it wasn’t just one or two players who were struggling, it was a system wide destruction with Galway players running through the middle seemingly unopposed in the first half.

As devastating as the final scoreline is (and for players, management and fans in Pairc Sheain Ui Eslin it was a traumatic viewing), it could have been worse had keeper Philip Farrelly not made a few great saves in the first half.

Galway did Leitrim the dubious honour of taking them seriously and they went for the jugular early, ripping holes into a Leitrim defence that conceded 2-10 against a woeful GMIT the week previously as they hit the net with their first three attacks.

It is still just the pre-season and reading too much into any result, be it the resounding destruction of GMIT or Galway's cakewalk last Sunday, can be misleading but there is no doubt that if Leitrim had beaten Galway or put up a strong display, there would have been lots of fans predicting great things in 2017.

What we can take from Sunday's game is hard to know. That work remains to be done on the Leitrim project is obvious but what will displease manager Brendan Guckian and his high-powered management team was the lack of bite in the Green & Gold ranks.

Sligo will tell us more of where this Leitrim team stand but they need a lot of work to recover from the system's failure that left them so badly exposed last Sunday.

Galway’s strong line-up indicated intent and they demonstrated it just 20 seconds in when Paul Conroy’s shot hit the post and fell right to Danny Cummins who contorted himself and fired past a helpless Philip Farrelly.

That score let the air of the Leitrim balloon and barely had Leitrim kicked the ball out but Galway had the ball in the net again. A block on Fintan Ó’Curráin’s shot fell to Cummins whose effort was blocked by Farrelly and his defenders. Unfortunately, that ball rolled to Killian McDaid who drilled to the net with power.

A shell-shocked Leitrim were dealt a third blow when Barry McHugh and Sean Armstrong combined to cut open the defence for the hugely effective Paul Conroy to tap home an easy goal.

As bad as three goals inside 180 seconds was, it could have been far worse as Philip Farrelly made a good save from a McDaid shot while Paul Conroy saw a shot blocked with Flynn & McHugh adding points.

Leitrim fans raised a cheer when Lucan's Brendan Gallagher pointed after a long Donal Wrynn delivery was knocked down but even six minutes in, it seemed like a drop in the ocean and the Tribesmen were to add seven points before Leitrim got their next score.

Johnny Heaney, operating at wing-back, would add three points from distance, McHugh and Conroy one each with two Mulligan frees in response as Galway led by a staggering 3-14 to 0-4 at the halftime break.

Leitrim made changes, Mattie Murphy and Jack Heslin replacing Fionn Carney and Keith Beirne but Galway simply continued where they left off, scoring an unanswered 1-3 in the first 12 minutes.

Points from full-back David Walsh and two from McHugh, a debutante who would go on to score 11 points, were added when Killian McDaid had a simple tap in after great work from Sean Armstrong.

Leitrim were lucky they weren’t down players as Wayne McKeon and James Rooney escaped more serious sanction for late fouls, McKeon blocking a man off the ball and Rooney for a late tackle but referee Liam Devaney exercised the sort of leniency that is the bane of the black card.

Sub Gareth Bradshaw pointed on 16 minutes, Damien Moran replying with an excellent point from the corner after a great Ronan Gallagher pass but Galway reminded everyone of their class with a rocket of a goal from Sean Armstrong with 12 minutes left.

McHugh swapped two points with Wayne McKeon as Galway eased up and Leitrim went in search of consolation scores but there was little consolation as McHugh added a final point either side of two Mulligan frees, the second after a ridiculous black card for Thomas Flynn.