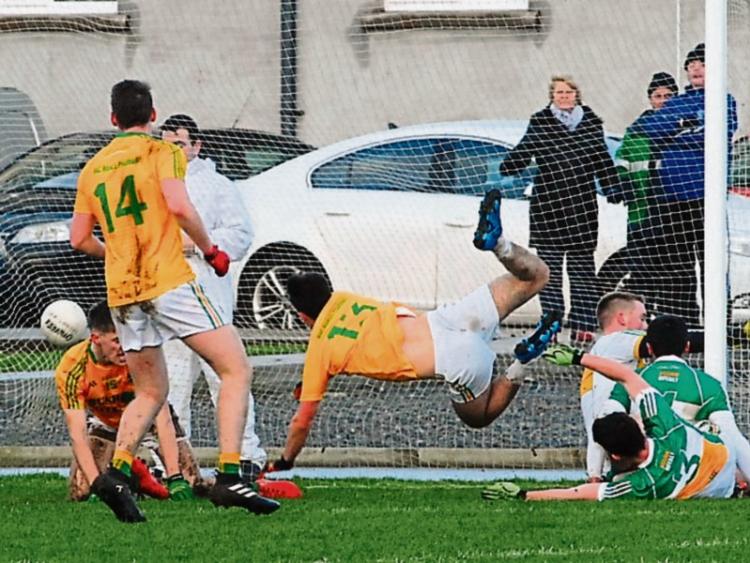 An airborne Robbie Cunningham watches as the ball flies into the Offaly net last Saturday. Photo by Willie Donnellan.

An inspiring win that qualified Leitrim for the Hastings Cup Semi-Final came with a huge cost as Darragh Rooney suffered a suspected broken collar bone.

A committed Offaly side really tested Leitrim's resolve and resilience as an injury hit squad was put to the pin of their collars to hold out against the midlanders in the final ten minutes as an Offaly goal might have sent Leitrim into the Shield rather than the Semi-Finals proper.

But that defensive resilience came with a huge cost as Darragh Rooney literally made a bone-jarring shoulder on an Offaly attacker, preventing a goal chance but also potentially ending his U21 championship season with a suspected broken collarbone.

Leitrim will meet Longford under lights in the semi-final on Friday, January 20, in Newtownforbes at 8 pm.

Leitrim started with a lovely Keith Beirne point from play but were rocked when an intercepted Leitrim hand-pass was worked into Rory McNamee who drilled the ball to the net, despite Jack Burke getting his hand to the shot.

Beirne pointed after a shot was saved by the Offaly keeper following a Conor Gaffney run but the midlanders rattled the net again on nine minutes when a ball hand-passed over the defence ended with Shane Tierney finishing brilliantly to the Leitrim net.

McNamee added a point but Leitrim went into overdrive as they won virtually every Offaly kickout. Darragh Rooney set up Beirne for a point while Mark Plunkett saw a shot saved. Beirne put over a free while Robbie Cunningham pointed after Keith Keegan saw a shot saved by the keeper.

The first goal came almost immediately when Jack Heslin drove in at speed and crossed the ball towards Darragh Rooney who seemed to be unceremoniously upended before he got near the ball but Robbie Cunningham came with an acrobatic finish.

From the next kickout, Leitrim again found Heslin on a surging run and he passed across to Rooney for an easy finish to the Offaly net.

That suddenly transformed a two point deficit into a four point lead but Offaly fought back only to see them miss three good chances. Keith Beirne swapped points with Shane Tierney but the Mohill man added another free to give Leitrim a five point halftime lead, 2-7 to 2-2.

Beirne converted a first minute free but Offaly made an early surge with three points from Ciaran Farrell (2) and Tierney to cut the lead to three points. Crucially, that would have put Offaly through on scoring difference.

But then Mark Plunkett cut loose with two points in the space of a minute, the second a monster 50 into the wind while Conor Cullen saw a blistering shot tipped over the bar by the Offaly keeper.

Jack Heslin scored a good point from a very tight angle but Leitrim looked in trouble when Offaly worked the ball through and Colm Doyle was clearly taken out of it. A penalty was awarded but Jack Burke proved to be equal to the task, making a great save from Tierney to stop the low shot at the expense of a fifty.

From the fifty, Tierney pointed and Jordan Hayes scored a well worked point to keep the pressure on the Leitrim lads.

Jack Heslin finished off a great run with a lovely point but Offaly continued to pressurise and Rory McNamee fisted a fifty over the Leitrim bar when a goal looked certain.

But that was as close as Offaly got and a Keith Beirne free sealed a six point win. Unfortunately, it wasn’t the end of the game as Darragh Rooney delivered a huge hit on an Offaly defender, sustaining a suspected broken collarbone in the process in a huge blow for the U21 team.