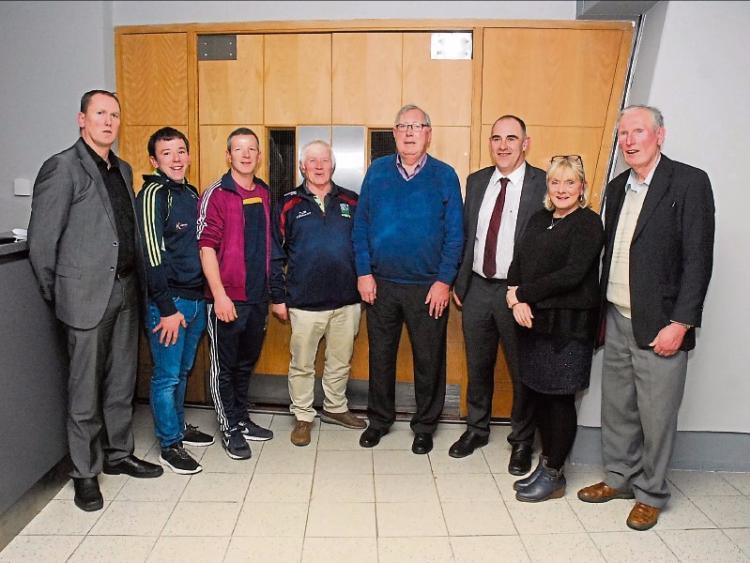 Low-key it may have been but Leitrim’s dedicated supporters in the capital left the Celtic Suite in Croke Park after attending the launch of the 2017 Leitrim Supporters Club with a spring in their step.

Nevertheless, there was a poignant mood to the launch of the Leitrim Supporters Club as the county’s exiles remembered the late Dermot Gallagher, a man who was a regular at the event down through the years.

Joe Layden said “Dermot always had a plan, a fifty year plan for Sam. Dermot was a great Leitrim person in many respects, not solely in the GAA.”

But last Thursday was primarily the launch of a fundraising drive to keep the county’s teams competing at the highest possible levels as Colin Regan commented “Hope is a very important thing and there is a sense that we have an exceptional management team pulled together.”

New manager Brendan Guckian and John O’Mahony gave interesting addresses as Brendan talked about his plans for Leitrim while John looked back over his fascinating career with many interesting asides on the current state of the game.

Joe Layden gave an update on the the BUILD initiative - Business United In Leitrim Development - which plans to raise an additional €100,000 a year to help in the development of elite skills coaching in the game’s young footballers.

“We are planning to make up for our lack of numbers by having more skilled coaching and to make what we do have better. We want to rebrand Leitrim from our condition of continually failing and not very cool and make it a fun, buoyant, vibrant and successful county.”

Joe admitted that the initiative will take a lot of work and a lot of financial commitment from the county’s supporters - “We have the best supporters in the country and I will hope they are willing to dig their hands into their pockets yet again. If All-Irelands are given out by the enthusiasm and love of the game, we would have a truckful of All-Irelands by now.”

The former Leitrim captain pointed out that the GAA in Leitrim could disappear as it is under threat from rugby and that “Croke Park have to realise that passion is finite and if we can do it in Leitrim, we can do it anywhere.”

Leitrim GAA County Board Chairman Terence Boyle thanked all the Exiles for their support down through the years but stressed that the work being done in the county, particularly the revamp of underage structures, would bear fruit in the future.

“We all know we face an uphill battle but if we take it one step at a time, we will get there. You have never been found wanting for supporters and there is a great prospect of Leitrim turning our fortunes around. There will be slip-ups along the way but if we are patient, we will get there.”

The evening also featured entertainment from the St. Mary's Scor groups as well as a performance from Tommy Moran & Sean O'Suilleabhain that had the place in stitches.

Leitrim Supporters Club tickets are available from all clubs in the county and are priced at €40 each.