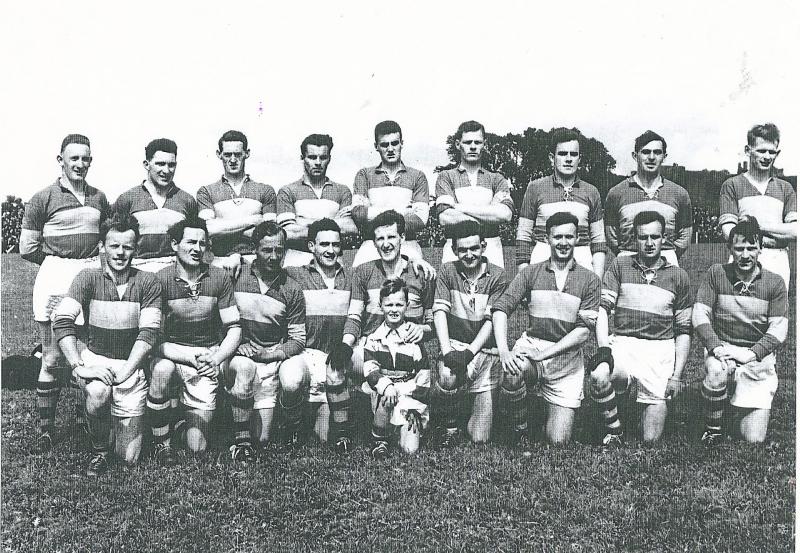 The Leitrim team of 1958 who were defeated in controversial circumstances by Galway in the Connacht Final in St. Coman’s Park Roscommon. Fr Tom Colreavy is pictured front row, third from the right.

Leitrim GAA have led the tributes to former Leitrim footballer Fr Tom Colreavy who passed away suddenly while on vacation in Cape Town, South Africa on Monday, January 30.

Expressing profound sadness at the news of the passing of Fr Colreavy, a tribute posted on the Leitrim GAA website highlighted some of the achievements, on and off the pitch, of the man who was an integral part of the great Leitrim teams of the late 1950's.

Formerly of Annaghoney, Gortletteragh and St. Anne’s Parish, Ayrfield, Dublin, Fr. Tom played at full back in the Connacht Finals of 1957, 1958 and 1959 while lining out at right half back in the final of 1960. Unfortunately, Leitrim couldn’t get the better of Galway on each of those occasions, but the loyalty and friendships forged over that period have been in evidence on so many occasions since as Fr. Tom was the first familiar face you would recognise at many gatherings that have occurred in almost six decades that have passed subsequently.

As a proud Gortletteragh man, Fr Tom lined out at centre-half-back for his native club on many occasions throughout this period and into the mid-1960’s, on many occasions with his four brothers. Indeed in their fine Club and Parish History “Scéal Gortleitreach”, published in 1991, they bemoan the loss of the very influential Fr Tom to injury in the Leitrim SFC 1966 semi-final replay loss to neighbours Annaduff, such was the esteem with which he was held in as a footballer. They refer to the seeds of their 1970 SFC success having been sown in the many Dublin-based training sessions which took place in St Anne’s Park, Raheny. The by now-retired footballer, Fr. Tom was, no doubt, a spiritual and influential presence at these gatherings!

A staunch Leitrim supporter, Fr. Tom, had an avid interest in the fortunes of all Leitrim teams over the years in addition to those of his native Gortletteragh. He was essentially a great people person and, despite his pastoral workload in a busy Dublin Parish, you would never be surprised to see him at events, be they happy or sad, in his native county, such were the network of contacts and friendships that he had built up over many, many years.

His extensive network of connections around the city was huge and he was a tremendous friend to the Dublin Branch of the Leitrim Supporters Club in addition to officiating at many spiritual events across the capital. Indeed last May he celebrated a special commemorative mass in The Church of the Sacred Heart,  Arbour Hill (Church of the Defence Forces) for Seán Mac Diarmada & Tom Clarke on May 12th, the exact date of the centenary of the execution of Mac Diarmada.

Fr Tom is predeceased by his sister Brigid and he will be sadly missed by his sister Kathleen, brothers Hugh, Michael, Jack and Seamus, brother-in-law, sisters-in-law, nieces, nephews, grandnephews, grandniece, relatives, Archbishop Diarmuid Martin, fellow priests of the Dublin Diocese, parishioners of St. Paul’s Parish, Ayrfield and of the many parishes in which he ministered, neighbours and many wonderful friends.

Tributes were also paid by the St Laurence O'Toole's club in Dublin in which they said, "Fr Tom was always a great patron of O’Tooles GAA club and was greatly loved within the parish. He will be deeply missed by all who had the pleasure of meeting him.