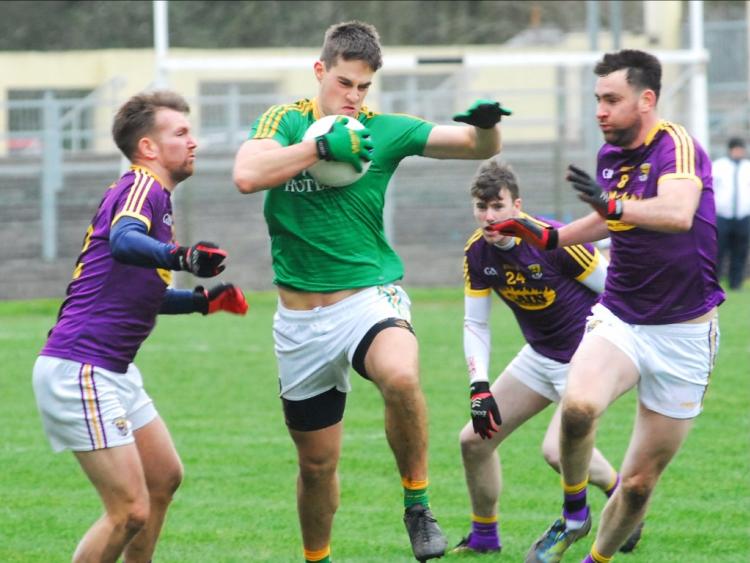 In what must go down as lost opportunity for the Green & Gold, 14-man Wexford denied Leitrim a famous victory when the visitors overcame the loss of a man and a three point halftime deficit to record a hard fought win in the Allianz League Division 4 in Pairc Sean Mac Diarmada last Sunday.

Leitrim produced a display of bristling aggression, fierce passion and drive that almost brought them a famous victory over one of the favourites for promotion but when the match was in the melting pot in the final quarter, it was Wexford who had the ice in their veins.

Despite losing James Stafford with five minutes to go in the first half, Wexford seemed to be the team with a man extra as they held onto the ball for long periods and crucially outscored the home team by four points to two.

It left Leitrim chasing the game but it was Wexford, with Ciaran Lyng and P.J. Banville outstanding from placed balls, that placed daggers in Leitrim’s hearts.

There was so much to admire about the Leitrim performance - Ryan O’Rourke punched holes repeatedly in the Wexford backline in the first half and Gary Plunkett scored three points while the feeling that Donal Wrynn has found his home on this Leitrim team was reinforced by a commanding display at centre-back.

The work-rate of this Leitrim team stood out as they never stopped running but they were unable to match the physical strength of a more mature Wexford who showed real calmness under pressure to first rescue and then win a game that looked unlikely after Stafford’s dismissal.

As much as most Leitrim fans would have accepted the final result before the throw-in, it has to be said that Sunday’s result was a lost opportunity to strike an unexpected blow in a Division that is already throwing up some shock results and will go right down to the wire.

Wexford got off to a flying start with two points in the first two minutes from Ciaran Lyng and Ben Brosnan but Leitrim hit back with a good point on the break from Gary Plunkett and an Emlyn Mulligan free, a free that should have been a penalty as Damian Moran was hit clearly inside the square.

Wexford hit back again with points from P.J. Banville and John Turbitt but two more Mulligan frees, one ridiculously soft after Mulligan appeared to foul his own man, had Leitrim in front.

The game took a major turn when Gary Plunkett pointed from distance despite a late hit on Mulligan but then Longford referee Patrick Maguire was called over by his linesman and then sent off James Stafford after a clash with Damian Moran.

Mulligan swapped points with a brilliant curling Lyng effort before Ryan O’Rourke, lucky to only receive a yellow after an off-the-ball block on a Wexford player off the ball, dodged his man and chipped over a great point in added time to give Leitrim a 0-8 to 0-5 halftime lead. Wexford would have the wind in the second half but the early signs were good as Mark Plunkett matched a point from Turbitt while Gary Plunkett responded after two further scores from Lyng and Turbitt.

But Wexford were on a run and two P.J. Banville frees had Wexford level by the tenth minute.

Leitrim surged back in front when Dean McGovern got away with ten or 12 steps to fire over, a score quickly followed by another Mulligan free.

Wexford were kicking wides too but a monster free from Michael O’Regan from close to the halfway line narrowed the gap with 15 minutes to go and Lyng then scored from a very tight angle to tie the scores once more.

Sub Keith Beirne restored Leitrim’s lead with a point with 12 minutes of normal time left but Wexford were on a surge and Banville pointed twice, one from a monster 50 yard free out on the wing, to incredibly edge Wexford in front.

Wexford then played keep-ball with the ball for five minutes, running Leitrim ragged before Lyng put over a massive free from the wing and then wing-back Eoghan Nolan pounced on a hasty kickout to put his team three points clear with less than three minutes of normal time left.

A stunned Leitrim tried everything but the final score came with a touch of good fortune as a Wexford player touched the ball on the ground under no pressure, Nevin O’Donnell curling over a free to leave two between the teams.

Unfortunately Leitrim couldn’t engineer any clear cut chances although there was a bit of confusion when an umpire signalled a point for Donal Wrynn but was overruled by the referee and Wexford held on for a hard fought win.